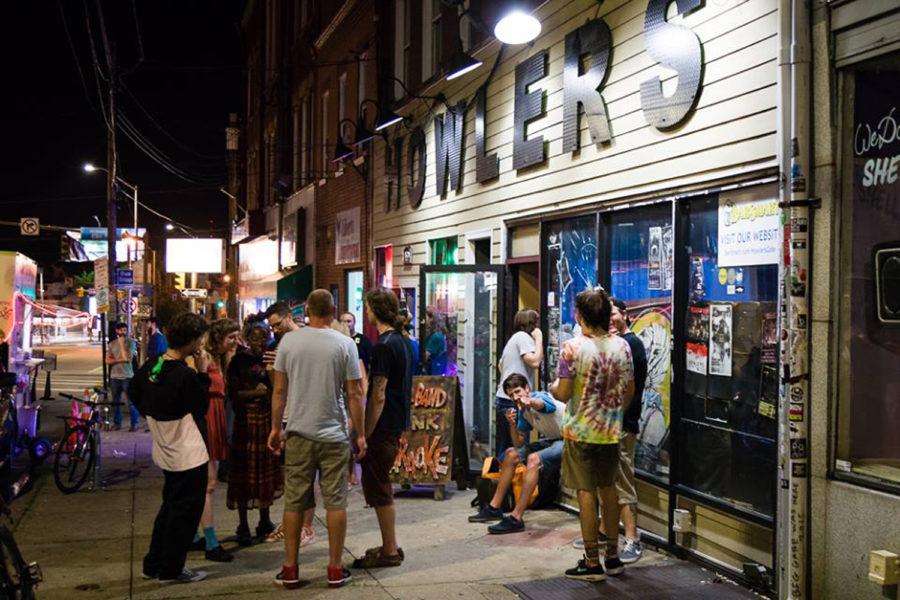 Howler’s Bar is one of the most popular music venues in Bloomfield. (Photo courtesy of Susan Coe)

The eclectic, little neighborhood of Bloomfield holds a secret within it: an erupting music scene. Bloomfield’s booming music and arts culture has created a niche community of creators, bands and artists — all aiming for the scene to thrive.

One of the most popular hubs in the neighborhood — known as Pittsburgh’s Little Italy — is the Mr. Roboto Project. The space, established in 1999, has been a major contributor toward shaping the neighborhood’s music scene for almost 20 years.

Upon entering the hole-in-the-wall DIY music venue in Penn Avenue, eyes are immediately drawn to the walls plastered with pop-up art from a featured artist. Looking almost like the location of a house show, Roboto’s familiar basement-esque feel helps to characterize the intimate atmosphere of Bloomfield.

Indigo Baloch, director of public relations at Roboto, explained how dedication to the music community is what drives the six Roboto board members in keeping the volunteer-only hangout up, running and constantly booking bands.

“It’s hard to find people that are dedicated enough to put in so much time and they know that they’re not getting paid,” Baloch said. “It’s a matter of finding people that really care about the music scene and want to see it thrive.”

Since their opening, Roboto has grown their name, now receiving messages from bands through Facebook and emails every day asking to book the space. Baloch thinks this is because of how integral Bloomfield is to Pittsburgh’s music community.

“I think it’s the community … it’s all people that are trying to make art and make music. We’re in a very special, creative little pocket of Pittsburgh,” Baloch said.

The music scene in Bloomfield has been able to take advantage of the internet’s music community over the years to expand their reach. You can thank MySpace, a once-booming social media network that was eventually overtaken by Facebook, for Howlers’ status as another leading music site in Bloomfield.

Jo Coll, the booking manager, made a page for Howlers in 2006, as the social network was originally created to help bands gain exposure. From there, the live-music location continued to gain interest by bands and concert-goers alike — said Susan Coe, the owner.

“After all these years … more bands come to us than us having to seek them out,” she said.

The interior of the bar contrasts the home-like feel of Roboto with a pool table, dartboard and a graveyard of liquor bottles sitting behind the worn, wooden bar.

The stage for the bands is small. Howlers is typically interested in featuring lesser-known bands. Coe said Howlers does not cater to bands that make significantly large draws. It’s a limited space, after all. Still, Coe estimates they book hundreds of bands a year, filling the venue every week from Wednesday through Sunday.

Coe is a supporter of expanding Pittsburgh’s live music culture, but feels Bloomfield has its part covered.

“I wouldn’t mind seeing more support for music across the City,” said Coe. “But I don’t know that we need another venue in Bloomfield, per se.”

Most of Bloomfield’s venues are around Penn Ave, with some spilling over into neighboring Garfield. (Graphic by Brian Gentry | Contributing Editor)

Live-music hot spots are not the only component of the music scene. Other quirky music hubs in Bloomfield focus more on the physical copies of music than getting an audience in for shows.

Juke Records — a Bloomfield record store that has been located on Liberty Avenue for 40 years — recently began holding live shows featuring national and local artists once a week called Saturday Night Joints. The shows are free for the public, including the food and drinks provided.

But according to Jeff Gallagher, owner of Juke Records, the weekly shows are in no way competitive with traditional live music venues.

“We do these shows that are free, and we do them early on Saturday night and it’s just strictly promotional for me and for the bands. So, there’s no competition with me,” Gallagher said.

In fact, having Howlers across the street from Juke has actually been quite helpful for business, according to Gallagher. Concert-goers and band members will often pop into the vintage store either before or after shows — scoping out the collection of new and used vinyl and the 40 years of posters plastered on the walls.

There’s not much competition between nearby record stores either.

“We each have our own little niche that we fill,” Gallagher said. For Juke, their niche is alternative music. They do offer alternative rock, blues, jazz and hip-hop, but alternative is their main draw.

“But there’s always opportunity for more,” Gallagher said, “There’s not really a lot of other music venues, but there’s some open storefronts I’m sort of hoping that will be taken up.”

Bloomfield still has room to develop to become a well-recognized neighborhood for live music. In agreeance with Gallagher, Baloch hopes to see more areas for live music opening up in Bloomfield in the years to come.

“If there could be some more music in Bloomfield, that would be exciting,” Baloch said. “It would be great to build the community that’s already growing there.”