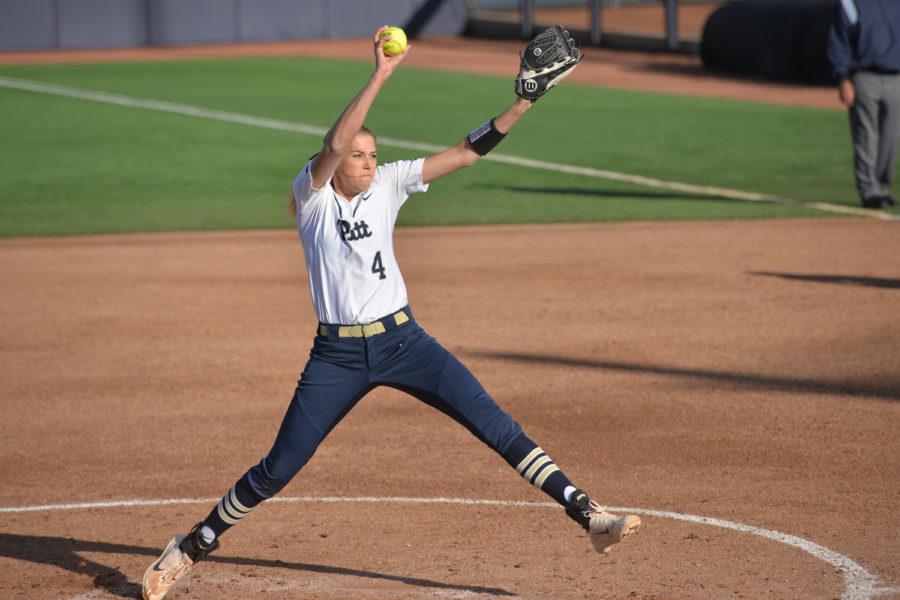 The Panthers come out of this weekend with records set on the track and with both the baseball and softball teams continuing their winning ways on the diamond. As students fight through finals this week, the Panthers are sprinting through the finish line.

Pitt went 2-1 this weekend against Miami, moving the Panthers record to 10-11 in conference and 21-16 overall.

The weekend series started Friday with a 2-1 win for the Panthers. The two teams traded a run a piece in the early stages of the game before a ninth-inning home run from first-year outfielder Ron Washington Jr. gave Pitt the win.

Washington Jr. went 3-4, with an RBI, a run scored and a homerun. Redshirt sophomore infielder David Yanni added the other RBI in the third inning.

Sophomore Dan Hammer started on the hill for the Panthers and, after allowing a run in the first inning, settled on allowing just three hits and one earned run in seven innings. Junior pitcher Yaya Chentouf came in for the ninth inning and earned his seventh save of the season to close out the game.

Another strong pitching performance led the Panthers to victory in the first game of Saturday’s doubleheader. This time it was redshirt senior pitcher Matt Pidich with the start, throwing seven strikeouts and allowing four hits over six and two-third innings. Sophomore pitcher RJ Freure threw two and one-third innings in relief to complete the shutout.

The Panthers lost 3-0 in the second of Saturday’s two games. The pitching staff held the Hurricanes in check yet again, but the Panther offense only mustered three hits during the game.

Redshirt junior Blair Calvo started on the hill and threw seven strikeouts, allowing two earned runs across seven innings. Chentouf entered in the eighth and threw a scoreless inning in relief with the Panthers already down 3-0.

Redshirt junior infielder Liam Sabino and junior outfielder Connor Perry were the only Panthers to register hits in the game.

The Panther softball team had yet another ACC matchup this weekend, facing off with the Virginia Cavaliers. Pitt went 3-0, extending its win streak to five games and now with a 26-16-1 overall record and 14-6 ACC record.

Panthers took a 2-0 lead in the bottom of the first on Friday and never looked back, winning 9-2. Junior pitcher Sarah Dawson threw a complete game, allowing seven hits and two runs with seven strikeouts.

Pitt jumped out to an early lead with two runs in the first inning in Saturday’s contest. The two teams entered the seventh inning tied, before Hunter Levesque produced a walk-off RBI, ending the game in dramatic fashion.

Giorgiana Zeremenko also had a productive day at the plate, going 2-3 with two RBIs, while Levesque added the third and final RBI of the game.

The Panthers completed the weekend sweep over the Cavaliers in a 12-1 thrashing. Due to the run rule that states a game must be called if one team leads by 10 runs after five innings, the game ended before the Panthers went to bat in the fifth inning.

The Panthers are back on the diamond next weekend playing the University of Marshall at home in a doubleheader. First pitch is Saturday at 4 p.m.

The Pitt track and field team saw first place finishes and school records broken in what ended up being a decorated weekend in Charlottesville, Virginia, for the Virginia Classic.

Nine Panthers finished in the top-10 on Friday — the first day of competition. Senior Desiree Garland came in second in the women’s 400m invitational with a time of 54.82. First-year Alexis Leech and sophomore Nina Crawford competed in the 400m and placed fifth and ninth, respectively.

Sophomores Taylor Middleton, Dante Watson and Jabari Michael-Khensu all finished top-10 in their events as well. Middleton was seventh in the triple-jump with 11.99m, Watson was 10th in the men’s 800m invite and Michael-Khensu was sixth in the 100m dash.

The Panthers turned in more strong performances on the second day of competition. First-year Greg Lauray stood out as the highlight performer of the day, tying a program record in the high jump at 2.16m, finishing second in the event.

Pitt found strong results across the field with senior Billy Caldwell winning the men’s 3000m steeplechase and Jones-Roundtree and sophomore Michael-Khensu finishing second and third in the men’s 200m. First-year Kollin Smith was fourth in long jump invite and sophomore Shyheim Wright was the runner-up in the men’s 110m hurdles.

On the women’s side, Middleton was seventh in the long jump and senior Nicole Bell was sixth in the women’s high jump. Three women — Leech, Crawford and sophomore Aysha Muhammad — finished top-10 in the women’s 400m hurdles.

Next weekend part of the team will be in Ashland, Ohio, for the Ashland Open and the other athletes will be in Philadelphia for the Penn Relays.

After an ACC road trip to face NC State and North Carolina this weekend, the Pitt tennis team now holds an 0-14 in conference record and 6-15 overall.

The team lost to NC State on Friday by a score of 6-1. First-year Claudia Bartolome was the only Panther to win on the day — her 18th victory of the season. She defeated NC State junior Bianca Moldovan 6-3, 3-6, 1-0.

The search for their first ACC win in the final match of the season was squandered by No. 1 North Carolina on Sunday as Pitt lost 6-1, finishing the year winless in the ACC.

In doubles, the No. 77 duo of senior Callie Frey and first-year Camila Moreno beat the No. 1 team of junior Jessie Aney and sophomore Alexa Graham, 6-2. It was the only doubles competition the Panthers would win as North Carolina took the other two doubles competitions.

The Panthers will play in their final competition of the season next week as they head to the the ACC Championships in Cary, North Carolina, from April 25 to 29.