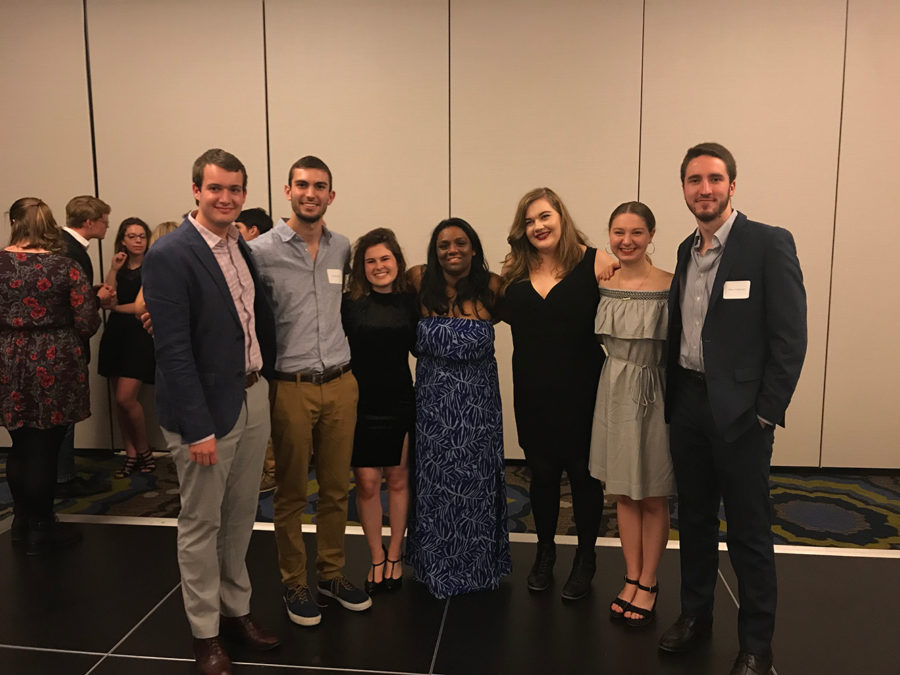 I met Amanda the spring semester of my first year as a news writer. I’d already been around since September, but she wasn’t one of my editors until that January. I remember being a bit nervous having to work with an entirely new editor halfway through the year — but looking back, I am so glad I got to meet her that early and work with her since.

Amanda is incredible. She’s a powerhouse as a journalist. Besides helping me whip my drafts into shape as a news editor last year, she has since served as TPN’s staff developer and as our social media manager. On top of doing all that, she’s still somehow found time to write stories, both for TPN and other publications. She’s also taken the time to help others in their own quests to be journalists, including me (Amanda, thanks again for editing my resumé and cover letter).

Her talent is immense — her legendary feature on the campus crows is one of my favorites. I envy her optimism, creativity and drive, and I appreciate how she always has time for everyone who has a question or needs a favor. We can always count on her to make us laugh or have a suggestion for a story or project.

I have no doubt she’s going to succeed as a journalist. On one hand, I wish she could hang around a little longer, but on the other I’m excited to see her go out in the world. Amanda, I hope you find success chasing your dreams — if I’m really lucky, maybe I’ll get to work with you again in the future.

I met Henry at the beginning of this school year when I joined The Pitt News as a timid columnist in the opinions section — and somehow, I got to spend the spring semester sitting at the desk beside his as assistant opinions editor. Though I was reluctant to take the position, I can’t imagine having a first editor experience with someone other than Henry.

I credit his lighthearted nature with keeping us sane this semester — working at a newspaper is serious work, but serious work also comes with serious fun. I’ll never forget our bar-hopping escapade around Oakland — for research purposes, obviously — to write that point-counterpoint. He’s also almost solely responsible for assuring me that my editorials and columns aren’t trash, even when I’m convinced they are.

Henry truly has some of the best opinions around, and our section of the paper wouldn’t be nearly what it is — a family — without the care he takes with each writer. Don’t forget us too quickly in California, Henry, and definitely don’t forget your daily African proverb — if you don’t want the tail of a monkey to touch you, don’t attend a monkey dance.

Henry might have won the “Most Eager to Leave The Pitt News” superlative, but I know that, at least for me and the rest of the opinions section, we’re going to miss him next year a whole lot.

When I took over the news desk for the spring semester, I had no idea what I was getting into. I honestly blame Rachel for that, because she made it look so easy. But that’s just how Rachel is. She takes whatever is thrown her way and handles it with a whole lot of grace and always a bit of humor.

In her time at the paper, Rachel has gone from writer to news editor to assistant layout editor. She has written about everything from the University Counseling Center to a grand piano in the William Pitt Union.

She has also gone from being a co-worker to one of my best friends. While struggling with the news desk, I knew I could walk into the production room or send her a text at any time, and she would always have words of encouragement. When I was struggling with friendship or relationship issues, she always made enough time for a quick chat and a hug. She’s now on the short list of people allowed to hug me.

I know everyone in the office will miss hearing her animated storytelling and seeing her infectious smile. But she’s off to another country for another adventure, and I know we can’t wait to hear those stories when she comes back.

John and I have followed similar paths while working at The Pitt News. We went from photographers to editors and were both considered for the managing editor position — the position he now holds as my boss. For the record, I passed it up, but just because I knew he would be so fantastic at it.

Jokes aside, John really is a treasure. He’s incredibly headstrong in his opinions when it comes to edits, visuals and other general news goings-on — and he is also the single most hardworking person I know. His borderline obsession with journalism is annoying at times (all the time?), but I have never met a person more dedicated to his craft.

Anyway, working with John has been a fantastic experience. I will never forget him consoling me in the stairwell when I was sad, going on Primanti’s chili runs between reads and fighting about whether or not there should be a comma after that clause. Yes, John, there should be!

I will take this last moment to disclose the fact that John and I have been dating for almost two years now, thanks to The Pitt News.

You’ll do great things, John. I’m sure of it.

O copy chief, my copy chief. Kyleen was the first person I met at copy desk when I started as a copy editor in the spring of last year, and she introduced me to Slack and Trello, sat with me through my painstakingly slow first reads on stories and imbued the desk with enthusiasm for and dedication to the job. Wednesday and Thursday nights that semester became a time for work but also for friendship — rattling off ever-growing to-do lists, cursing Merriam-Webster and exchanging tales about Russia and missing newsstands.

When I found out that I would be her assistant copy chief this year, my primary qualm — aside from a terrible case of imposter syndrome — was that I would no longer work the same nights as her. We still saw each other during production for special editions, though, and during the unforgettable first week of the fall semester. We worked every night together that week as we assembled our staff.

While the steep learning curve felt like someone had dropped us onto a treadmill set at the fastest speed, she brought the levity and support necessary to not only get us through the week, but make it enjoyable. She won the “Most Likely to Corrupt a Junior Member of Copy Desk With Copy Desk Pride” superlative, and I couldn’t agree more. But her kindness and incredible work ethic also make her other superlative, “Most Employable After Graduation,” undeniably true, and I can’t wait to see where she goes.

I’ll never be able to thank Ash enough for what she did for me that day and every day since, and if you ask anybody else that has either worked with or for Ash, they will have a story just like mine.

That’s who Ash is. She is incredibly generous with her time, talent and energy for the people she cares about and she cares so deeply about all of the people lucky enough to work with and for her.

It’s what makes Ash such a great leader. You see how hard she works and can’t help but want to do the same. You want to do all you can for Ash because you know she’ll always do the same for you.

Every day I come to work at the paper, I’m thankful that Ash didn’t let me quit. If she had, I wouldn’t have gotten the chance to work for the greatest leader I’ve ever known and one of the best friends I’ve ever had.