Pittsburgh Marathon draws runners from around the world 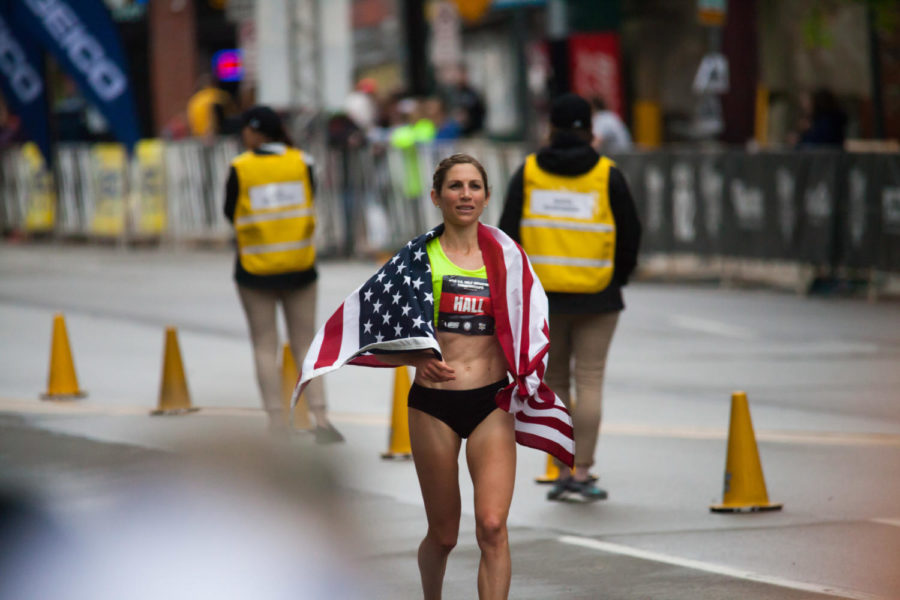 Despite overcast skies, cool temperatures and the threat of rain, more than 37,000 people showed up at the starting line for the 10th annual Pittsburgh Marathon early Sunday morning.

The weekend of races, hosted by Pittsburgh Three Rivers Marathon, Inc., also drew a crowd of more than 200,000 spectators, a majority of which crowded around the starting point at Liberty and 10th Street Downtown. The route took runners to the North Side, through South Side, and around Oakland and East Liberty before returning back to Downtown. The USA Track and Field Half Marathon Championships also took place alongside the Dick’s Sporting Goods Pittsburgh Marathon and the UPMC Health Plan Pittsburgh Half Marathon.

Some experienced runners, like Pittsburgh local Kourtney Watkiss, remained positive despite the gloomy skies. She finished the half marathon with a time of 1:42:43. Compared to the weather at other marathons she’s participated in — like this year’s Boston Marathon on April 16 — Watkiss described the weather for Sunday’s race as “lucky.”

“Running Boston, it was about 38 degrees, it poured, and there were hurricane-force winds,” Watkiss said. “Having this was golden. I was really happy that it didn’t rain.”

Race participants came from all 50 states. White Sands, New Mexico, resident Dwight Rabe, 33, represented his state with a personal record-breaking time of 2:52:58 in the full marathon. It was his first time running in Pittsburgh — the active-duty Air Force airman had been looking for a new race to run during the springtime, and the Pittsburgh Marathon’s challenging course stood out.

“I’ve never been to Pittsburgh before …  it’s actually a really pretty city, with the rivers and the bridges,” Rabe said. “It was definitely a challenging course, especially the hills in the second half … it’s a really good race. I’d recommend it.”

While Rabe traveled across the country to participate in the race, some participants had never run the race despite living in the city. Kevin Walker-Neveras, a 54-year-old from Highland Park, ran the Pittsburgh half marathon for the first time with a finishing time of 1:44:05 — four minutes faster than his personal record time he’s run on flatter courses.

“It was a great race,” Walker-Neveras said. “I’ve never run this before. It’s a really fun course, I like it a lot.”

For spectator and Pitt alum Courtney Joyce, the race was close to home. The Canonsburg native attended the race to cheer on friends and family, carrying posters in support of her boyfriend Kenny Sukitch. Sukitch finished the half marathon with a time of 2:07:25.

“He’s been working his tail off,” Joyce said of Sukitch. “He tried to do this once before and he broke his ankle while prepping, so this one was a huge day for him that he could come out and do it.”

Joyce wasn’t the only spectator with creative signs in support of friends and family. Rebecca Zickar, from Hermitage watched the race with friends and family members. The small group had matching posters to support Zickar’s daughter, Lauren Zickar, who finished the full marathon with a time of 4:25:55. Rebecca Zickar said her daughter did more than just run to prepare for the race.

“She’s been practicing for months,” Rebecca Zickar said of her daughter. “She plays in tennis leagues, she spins, she goes to the gym … she’s always doing sports.”

Rebecca Zickar was one of many vocal spectators amongst the crowd. For Watkiss, Pittsburgh’s crowd support is what makes the City’s marathon great.

“Pittsburgh’s always a well-run race. Good crowd support, and I mean it’s a city that, for these races, is well-known throughout the country,” Watkiss said. “[I’m] proud to be in Pittsburgh.”