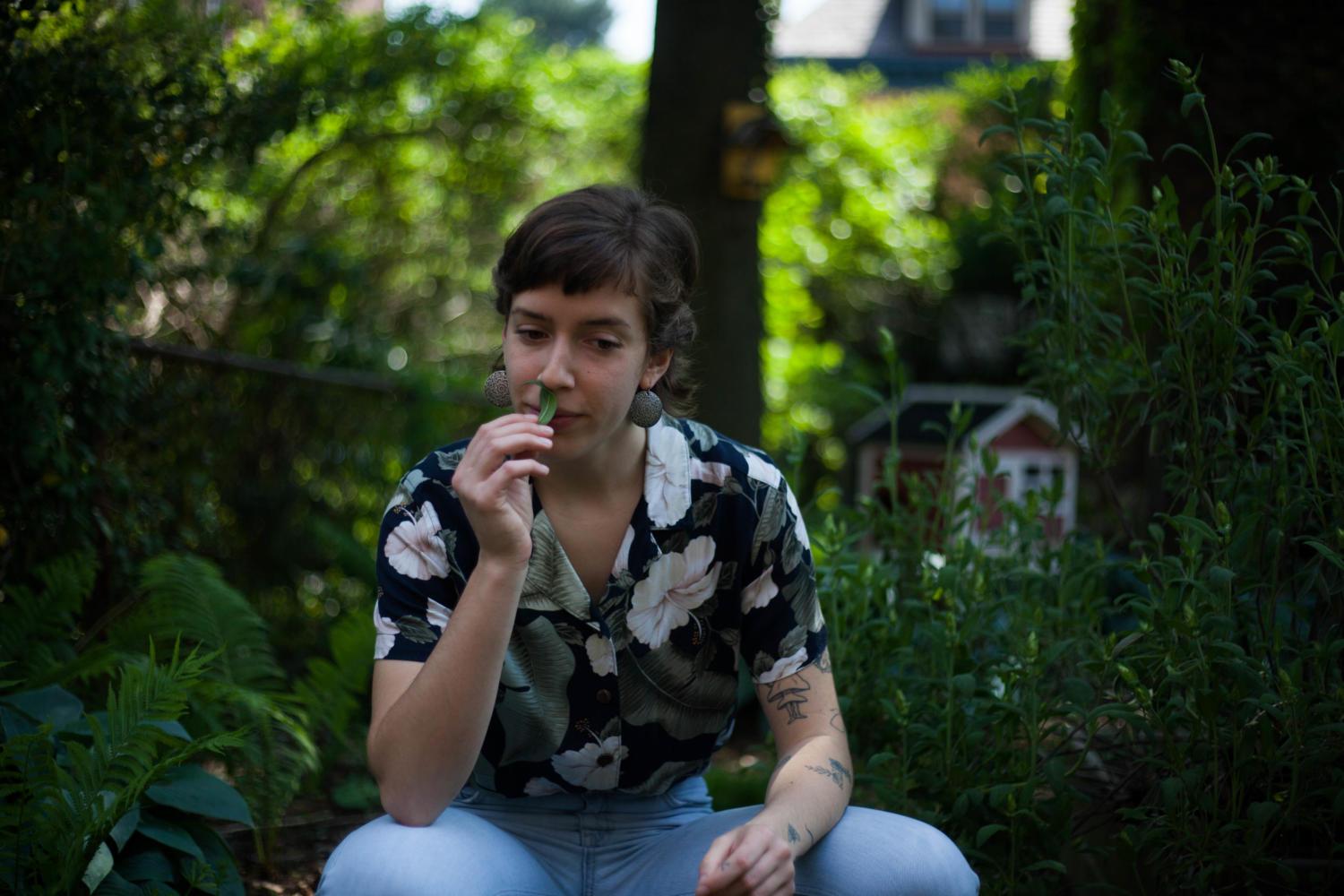 Written by Siddhi Shockey
Photos by Jane Millard
May 16, 2018

When she was a young artist in first grade, Ciara Gray brought an assignment to the front of the class to show the teacher her work — how she’d ripped a portrait from a magazine in half and pasted it to paper, sketching in the missing half of the model’s face.

Now, marks of Gray’s creativity are etched into her own skin — her arms are covered with tattoos featuring onions, butterflies and floral mandala designs, many of which she gave herself.

Gray graduated from Pitt in 2017 with degrees in studio arts and nonfiction writing, and has spent the last year of her life developing new artistic techniques and messages. She specializes in black line illustrations that explore her conceptions of femininity. She is entering her second year after graduating from Pitt with big artistic aspirations.

“I am delving more into gender and femininity, and that’s an important issue today,” Gray said.

These issues are apparent in her work, like in her piece called “Don’t Call Me Honey,” which shows a woman sitting splayed on the floor, her groin covered by a honeycomb and her breasts hidden behind a beehive and a flower. Bees fly around and under her body, as if she’s floating.

When Gray isn’t working part-time at Allegro Hearth Bakery in Squirrel Hill making cookies or baking bread, she is usually working on her art. In May, she will showcase some of her printmaking work at the Pittsburgh Center for the Arts in an exhibit called “Under the Blankets - Printmakers Together.” She was also featured at The Gallery 4’s 2017 Salon Show in Shadyside, which ran from May to June of 2017.

Ignacio Lopez, a 2016 Pitt graduate and fellow artist whose screen printing work will also be featured in “Under the Blankets - Printmakers Together” — reflected on the difficult yet fulfilling aspect of becoming a self-employed artist as one of Gray’s closest friends.

“It’s always really interesting to see what happens after [art majors] graduate, because they go into the real world and there’s a lot to explore,” Lopez said. “It’s interesting to see how people interact with that outside of the classroom.”

Gray is the type of artist who prefers working outside of the classroom. When she earned a Brackenridge Summer Research Fellowship in 2016, she traveled to Wyoming to take part in a field course through the University Honors College. Inspired by the trip, she set out to create a handmade book filled with visual art and original writing. She called it “The Things I Remember.”

“I wanted to combine my love of art and writing, and play with the ways in which words and images communicate with an audience,” Gray said.

But had she earned that fellowship as a first-year student, Gray might not have put it toward her artistic endeavors.

Despite having her family’s full support, Gray spent her first year at Pitt focusing on a business degree. She put art to the side while she focused on a degree she thought would get her a job after graduation, doubting that a studio arts degree would lead to stable, prosperous employment in her future.

“I was really focused on getting a job — maybe even ‘the’ job,” Gray said. “And that didn’t work out.”

While sitting in business classes, Gray quickly found herself unable to study without doodling or drawing — her small, creative outlet before digging into monotonous calculus problems. Feeling overwhelmed by her dislike of math classes and the lack of creativity in her life, she decided to return to her roots and pursue a double major in studio arts and nonfiction writing.

“It’s about finding the idea and figuring out how you’re going to translate that into something that is actually doable..."

Soon, she hopes to explore etching — an artistic style involving drawings on metals like copper, zinc and steel. But for now, she’s focused on a different kind of etching — tattooing. She’s starting an apprenticeship in tattoo artistry in the coming months, and as soon as her future tattoo shop allows, she will announce where she’ll be working.

She hopes tattooing will develop into a long-term career opportunity, beyond just tattooing herself. Her style mostly consists of black line drawings of nature, like extensions of her other artwork.

Gray sees art as her main form of communication, whether it’s through her writing or her visual art. Going forward, she wants to keep making publicly accessible art and expand her reach the artistic community. But more than anything else, she hopes to continue to tell stories through her work.

Gray’s book, “Things I Remember” is on display at the Frick Fine Arts Library. Other pieces of Gray’s work can be found with other Pittsburgh printmakers through this summer. “Under the Blankets - Printmakers Together” runs at the Pittsburgh Center for the Arts May 4-July 8.