The Pitt News • May 30, 2018 • https://pittnews.com/article/132348/opinions/not-just-a-sports-city-pittsburgh-culture-is-hidden-but-vibrant/

Not just a sports city: Pittsburgh culture is hidden but vibrant 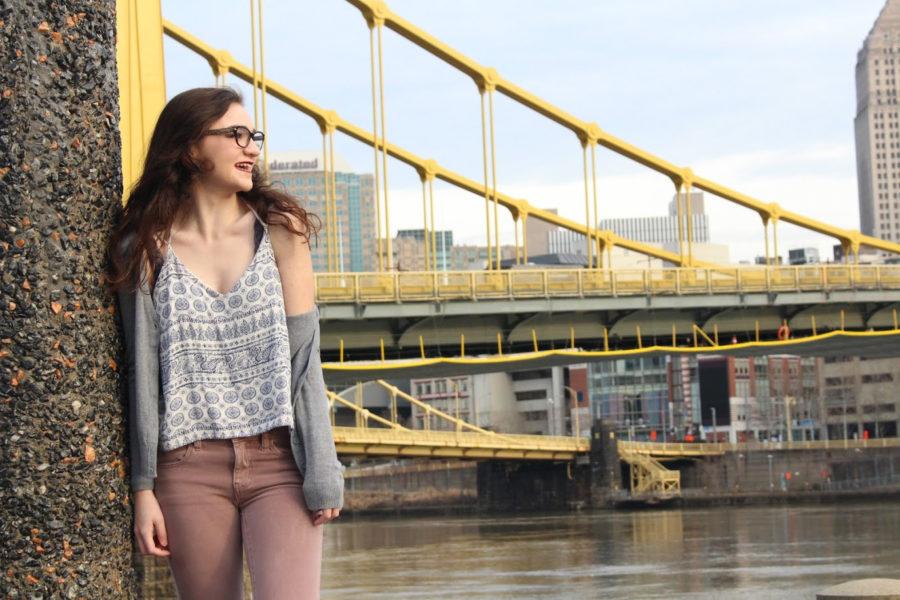 Sarah Connor enjoys being a Pittsburgh native while posing on the North Shore in front of iconic Pittsburgh bridges. (Photo courtesy of Chloe Yoder)

I grew up in a small town about 25 miles outside of the City — near the Pittsburgh International Airport — called Moon Township. It was common for people from my town to attend schools in and around the City, and I come from a long line of Pitt alumni. But I was independent as a kid and wanted to have new experiences, so my family ties to Pitt made me ignore it as an option rather than gravitate toward it.

Pittsburgh itself didn’t excite me much either. With many successful athletic teams, I always felt like it was a city for sports fans instead of music and art buffs. I didn’t care for Steelers games — and that still rings true today — but I was eventually introduced to the other intriguing parts of Pittsburgh that appealed to students with artistic and literary bents.

The summer before my senior year, I toured universities all around Ohio and New York. From Ohio University to Ithaca College, I was sure I could spread my wings and move far from Pittsburgh. But after pressure from my family, I sent in an application to Pitt. They wanted me to have the option to stay close to home in case I changed my mind about going far away, but at the time, I rolled my eyes and considered it a waste.

But during those summer months leading up to my final year of high school, something interrupted my determination to get out of Pittsburgh. An old friend of mine invited me out to one of downtown Pittsburgh’s Rooftop Shindigs — a live music and film event held on the roof of the Theater Square Garage multiple times every summer. This gave me the chance to experience a side of Pittsburgh I had never seen before.

That evening I saw the Pittsburgh-based, indie rock band Nevada Color play, a group that is now one of my favorite bands. The band members tossed beach balls around into the audience while rock music blared and people danced.

That show led me to delve deep into Pittsburgh’s music scene. Soon enough, I was taking the 28X bus from the airport to the City to go to shows in Pittsburgh as often as I could, jamming to other local and national bands I had only just discovered. Pittsburgh’s music culture had me traveling around the city more than before, taking me to places like Wigle Whiskey and the now-closed Altar Bar to see metal groups, emo bands and synth-pop duos perform.

My brother was a sophomore at Pitt at the time, which also got me into the City more often. Getting the chance to visit him at his South Oakland apartment was how I toured Pitt’s campus. He introduced me to Market Central, the now-closed Qdoba on Forbes and his classrooms in Benedum Hall. Sushi Fuku, Fuel & Fuddle and Dave & Andy’s Homemade Ice Cream were other places I experienced for the first time during those visits.

But the best part of visiting him was realizing how close he was to cultural landmarks like Phipps Conservatory and Botanical Gardens, and the Carnegie Museums — which he could get into for free with his student ID.

Culture was never this close to home in suburbia, but Pitt was surrounded by it.

I ultimately decided to give Pitt a chance. At first, my main drive behind considering Pitt was that I didn’t want to leave the music scenes and cultural perks I had discovered in the City. But I’ve also found plenty of academic opportunities to take advantage of since then — when I’m not spending time at at concerts, visiting museums or hanging out at Schenley Park.

I never would have decided to stay close to home and go to Pitt if I hadn’t taken the chance to explore the city’s thriving cultural scene. Pittsburgh culture gives students an opportunity to appreciate the arts and has options for free or cheap entertainment beyond the party culture of most U.S. universities. This is a quirk of Pitt that sits close to my heart.

Pitt students have the great opportunity to get a taste of the City’s flourishing music scene, courtesy of the student musicians and bands that play at house shows and at small venues weekly. Museums like The Andy Warhol Museum or The Mattress Factory are a part of the Pitt Arts program that allows Pitt students for free with their student IDs. With the dozens of restaurants to explore in Oakland and outside of it, plays, concerts, dance recitals and other artistic performances, culture is abundant.

For those who weren’t as lucky as me to live close by before coming to Pittsburgh or who haven’t been able to get off campus much before, take the time to explore the City. You’ll be surprised by how much it has to offer and how much it’ll improve your college experience. I can happily say after two years that my love affair with the music scene is still going strong — I’ve gotten to see Nevada Color play quite a few more times since that first concert.

I also discovered that I wanted to write about the music and culture Pittsburgh has to offer, leading me to flourish as a writer and decide to pursue a career in journalism.