The Pitt News • May 30, 2018 • https://pittnews.com/article/132363/opinions/respect-las-palmas-stop-purchasing-trendy-ethnic-food/ 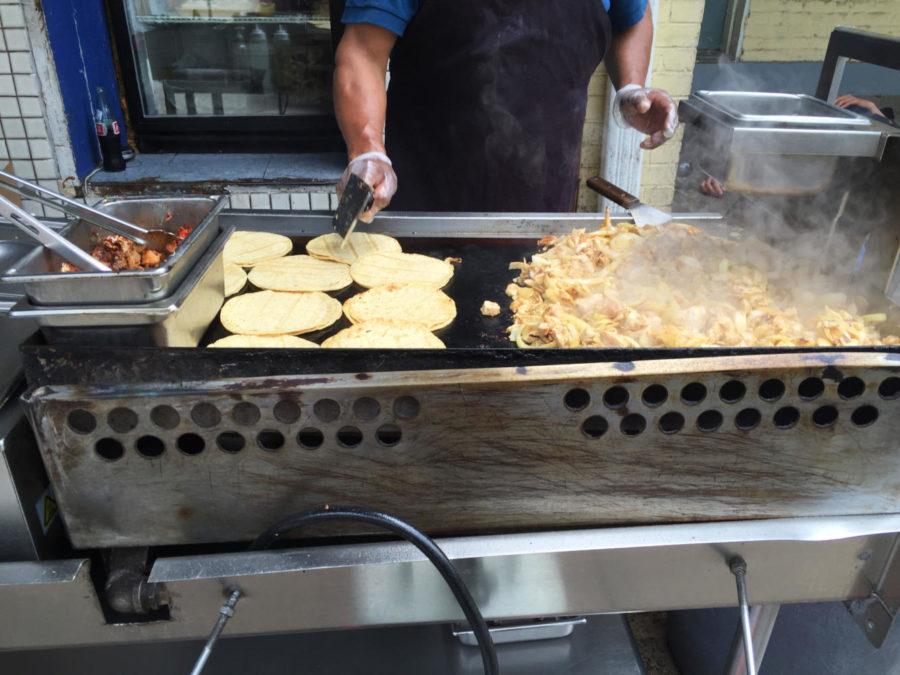 Nestled away on Atwood Street is an Oakland gem that’s the stuff of legends — Las Palmas.

As a big fan of Tex-Mex and home cooking, I do most of my grocery shopping at this small Mexican grocery store, where I can find ingredients such as jicama or prickly pears that conventional stores don’t carry. If I have any questions about what certain products are or how to best use them, the employees all grew up using them and can help. Las Palmas also doubles as a taqueria, serving cheap tacos made with doubled-up corn tortillas and a variety of meats like chicken, steak, ground beef and carnitas — all that you can customize with countless salsas, toppings and spices.

But restaurants like Las Palmas don’t get the hype they deserve. With depressing regularity, tacos and other “ethnic foods” are being pitched by Americans to Americans as a trendy, cultured, heritage-infused dining experience for monetary gain. The authenticity of Las Palmas tacos represents an easily accessible and affordable escape from these mainstream trends.

For entire communities that grew up eating non-American dishes, they never had to tell a story about their cuisine’s creation to justify their consumption of it. For them, it was just another great meal.

Traditional Taiwanese food that my mother painstakingly made for me to bring to elementary school used to get me the stink eye for not being an “ordinary” lunch like a cold and sad ham sandwich. Today, those same dishes are painted as a new trend — and Americans devour it, not realizing such food has been cooked and eaten by minority communities for generations.

Sadly, most might not realize that eating watered-down versions of “ethnic food” is far from a new and trendy experience to communities that cook that food for ordinary meals. Because they have no experience consuming traditional ethnic food, they often don’t recognize knock-off versions of it and accept those as adequate representations of the entire cuisine.

But the difference is clear. Las Palmas tacos sold me with their authenticity. As a rising senior, I go at least three or four times a week, and the man who operates the grill already knows what his next order will be the moment he hears my Western boots clacking down the sidewalk an entire block away.

Being the amateur taco enthusiast that I am, I found my interest piqued when a video about tacos al pastor showed up in YouTube recommended videos feed. It follows a bar owner in Manhattan telling the story of the cultural history and heritage behind tacos al pastor and serving them as a bar snack. The price tag? A jaw-dropping five dollars per taco.

What about this taco justifies a five dollar price tag? Everything about the taco in the video felt accessible and achievable by a quick run down the block to Las Palmas at half the price.

This jarring disconnect between tacos presented as a trendy bar food and the Las Palmas tacos I know and love came to a head when I recently visited Chicago during a layover.

While there, I visited a restaurant “inspired by authentic Mexican street food” that supposedly specialized in tacos and boasted a 4.4 star rating through over a thousand Google reviews. I looked over the menu to find pork, beef and beer-battered fish tacos commanding a $4 price tag — fairly hefty but perfectly justifiable if they were great tacos. And seeing the Google ratings, I had no reason to think I would be let down.

I was wrong. The battered fish fillet — while crispy and well-seasoned — was paired with plain cabbage and a meager helping of sauce over a single, cold tortilla. The other tacos struggled to do better with disappointingly small helpings of toppings. Worst of all, the salsa bar I could always depend on to add more life to taco was absent at this restaurant.

After taking a mere six bites — two per taco, that’s how small they were — I looked at my empty plate, still hungry and feeling defeated.

It wasn’t the culinary aspect of the tacos that people were paying for — it was the story of the taco being told.

While we may not be able to single-handedly reverse this trend, we should use our awareness of it to be better consumers — and teach our friends and family to do the same. Poke around your neighborhood to find hidden gems in hole-in-the-wall restaurants. Research the cuisine’s backstory to understand its heritage. While it may be a new, exotic experience for you, it’s someone else’s everyday meal with generations of history behind it.

Most importantly, if there’s some dish commanding a steep price that’s ultimately justified by its over-the-top cultural story, don’t buy the hype. You can always find better and still have enough in your wallet for seconds.