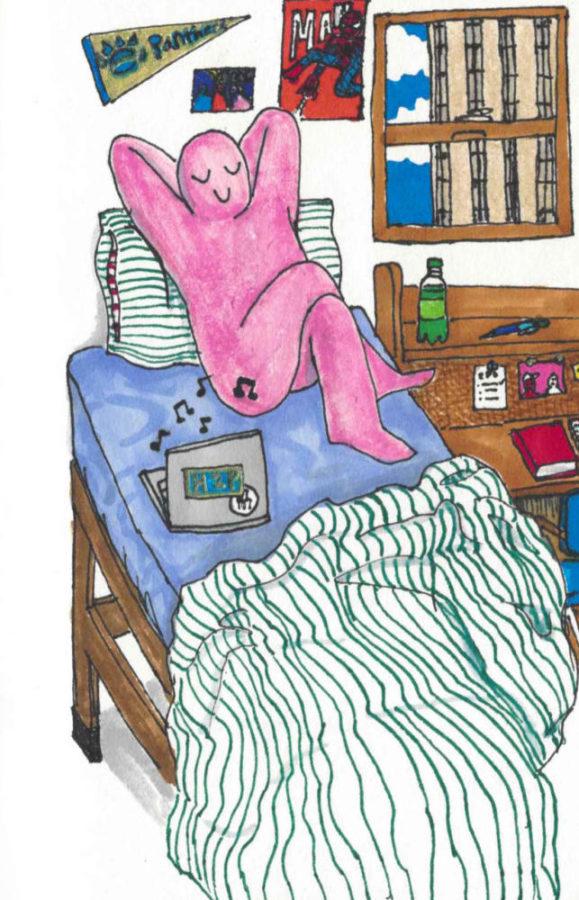 (Illustration by Sylvia Freeman | For The Pitt News)

As a first-year moving into Tower B, my first day of college mirrored everyone else’s — I scampered gleefully into Towers garage to retrieve my housing cart and impatiently waited for the elevator that would take me to meet my roommate. But unlike everyone else, my roommate left campus a couple weeks after moving in for no apparent reason — so we never got past the introduction phase.

Knowing Panther Central could assign me a new roommate with a day’s notice, I braced myself to host another transient houseguest. But as each day passed and people settled into their dorms, my chances of having a roommate grew slimmer — and that’s when I began to appreciate living on my own.

Some may think living alone is a choice only made by those who can’t get along with others, or people who are the solitary type. But living with a roommate is stressful, and first-year students should avoid it if possible.

During first-year orientations, administrators promote doubles — dorms that house two students in the same room — as the best way to make friends at a new university. Because everyone on each floor is a first-year, they’ll supposedly want to join in with awkward ice breakers and silly floor activities.

Close quarters certainly form convenient friendships, but they don’t forge tight, long-lasting bonds. According to psychologists in the U.K., the secret to establishing close friendships is mingling with people who share your interests and personality traits — meaning extracurriculars you enjoy contribute the most to your social life, not living within shouting distance of students your own age.

But Myrt Westphal — director of residential life at Swarthmore college — believes having roommates is necessary to foster collaboration among students. She continues Swarthmore’s residential tradition, which mandates that all first-years and sophomores live in doubles.

“A bunch of our students are scientists. They’re going to work in labs where they will have to share and work cooperatively,” she said. “The work world is cooperative. If you live with a partner, it’s a cooperative venture.”

Thousands of Pitt students are science majors — but Westphal makes a faulty comparison. Home life is significantly different from work life — it’s more personal and private. Living with a spouse or friend is far more comfortable than sharing a couple-hundred square feet with a complete stranger.

A single certainly allowed me to complete college coursework more efficiently. Suddenly, I could study without worrying about a drunk roommate blundering in at 3 a.m. — a common occurrence that hurts many students’ academic performance.

According to The National Bureau of Economic Research, students who drink frequently lower their roommate’s GPA by an average of 0.28 points out of 4.0 and make them 8.6 percent more likely to binge drink. With college binge drinking rates hovering around 40 percent, doubles only ensure that students with bad habits will negatively influence their peers.

Because Pitt randomly assigns many roommates, you never know if you’ll end up with a party animal or a studious academic. The uncertainty can be stressful — and that stress isn’t worth enduring when you don’t actually have to share your living space.

At Pitt, you can make the transition to single life without making a dent in your bank account. Tower C and Lothrop Hall — Pitt’s largest singles dorms — cost roughly the same as the average double at $3,200-3,500 per semester. So you’ll get more space and privacy for a similar price.

Still, it’s clear why University administrators continue to advocate for doubles despite their obvious downsides — singles cost 25 percent more to build. But most colleges believe ensuring better academic performance is worth the extra cost, as more colleges choose to invest in single dorms.

Building dorms takes time, though. For the many first-years who will inevitably be forced into a double this school year, websites like RoomSync and roomsurf allow them to find a compatible roommate by comparing mutual living preferences.

But if presented the option, students shouldn’t take on this extra stress. If they want to enjoy college like the students in Pitt’s housing catalogs, they should choose to live in a single.