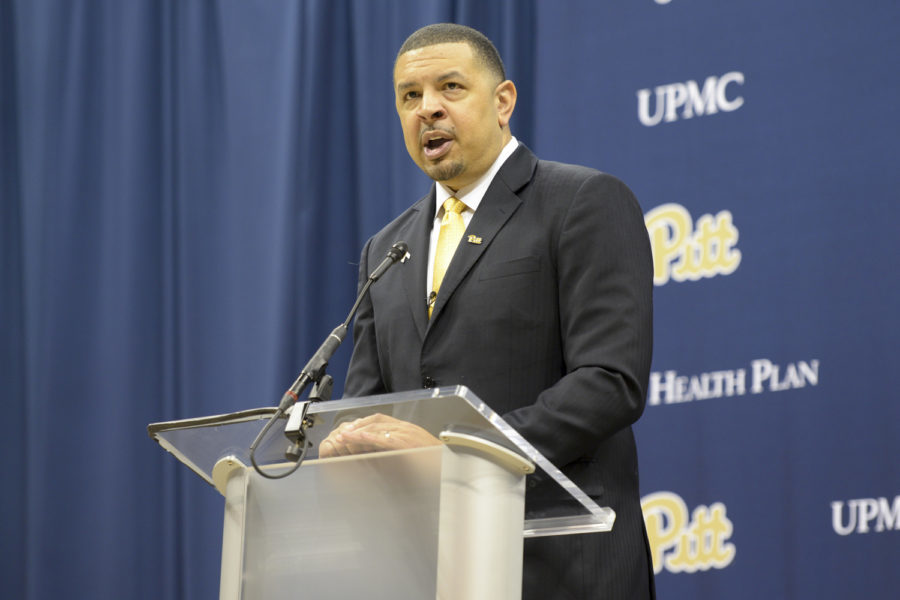 In her first year as Pitt’s athletic director, Heather Lyke quickly received a six-year extension to her contract at the end of April. Jumping right into a hectic season, Lyke hired six new head coaches to begin leading in the 2018-19 season, each one building their own unique coaching staffs. The whole process reflects Lyke’s plan of building what she said would be a new “Golden Era” for Pitt Athletics — a future endeavor rooted in Lyke’s new hires and the “Victory Heights” facility visions.

Lyke hired previous Duke assistant coach Jeff Capel to help bring the men’s basketball team back to its own golden era. From his experience working under current Duke head coach Mike Kryzyzewski, Capel comes to Pitt with a reputation as a top recruiter, landing Duke the No. 1 class in the country in four of the past five seasons. Capel previously served as head coach of Oklahoma, and head coach of Virginia Commonwealth University before that.

New Pitt women’s basketball head coach Lance White was hired mid-April after 15 years at Florida State working under Sue Semrau. White helped lead the team to the NCAA tournament in 13 of the past 14 years, and helped several players get drafted into the WNBA, including guard Brittany Brown who was drafted last year. He was named the Women’s Basketball Coaches Association National Assistant Coach of the Year during the 2016-17 season.

About a month after being hired, White announced three members to his coaching staff — Danielle Atkinson and Terri Mitchell as associate head coaches, and Josh Petersen as an assistant coach. And after three years with White at FSU, Atkinson and Petersen will quickly rekindle old chemistry as the three are reunited — but this time, coaching the Panthers. And with the addition of Mitchell — the prior women’s head coach at Marquette with record-holding wins — who took a four-year hiatus from coaching, the team expects a push to success from all four coaches.

Samantha Snider was hired mid-June 2017, taking the position over from Debbie Yohman, who had retired a month prior. Snider came to Pitt from Arkansas, her alma mater. While a student she competed in two NCAA championships, and quickly earned the title of director of operations at Arkansas after graduating, leading the team to five NCAA regional competitions. Snider was also named the National Association of Collegiate Gymnastics Coaches/Women South Central Region Assistant Coach of the Year in 2016.

Snider works alongside assistant coaches Dave Kuzara and her husband Ryan Snider. In her first year leading the program, the gymnastics team set several new program records and had numerous historical performances. Holding second-best overall score in program history, it was no surprise the team attended the 2018 NCAA Regional Championship for the first time since 2013 — and finished in fifth place.

Pitt hired Randy Waldrum after the program announced that Greg Miller was released as the women’s soccer head coach. Waldrum has 14 seasons of experience as head coach at Notre Dame with an overall record of 399-108-29. Prior to his tenure with the Fighting Irish, Waldrum also coached at Baylor for three seasons and Tulsa for six seasons. Furthermore, he was also named the head coach of the Houston Dash in the National Women’s Soccer League — working with seven national team players that eventually went on to the Rio Summer Olympic Games.

Waldrum announced his soccer staff a few months after it was announced that he would act as head coach. The staff includes Ben Waldrum and Dustin Stein — both as assistant coaches.

Keith Gavin, a 2008 Pitt graduate, was named the wrestling program’s 11th head coach — and was Lyke’s first hire as Athletic Director. Prior to this position, Gavin acted as assistant coach with Virginia for three years — winning the 2015 ACC Championship title — before later holding the same position with Oklahoma. At both schools, Gavin led a total of 15 wrestlers to qualify for the NCAA Championships.

Gavin added Jordan Leen to his staff as assistant coach to join Drew Headlee — who was the assistant coach under previous head coach Jason Peters. Under Gavin, Pitt wrestlers not only qualified for the ACC Wrestling Championship and the NCAA Championships, but a program-high four wrestlers were named to the All-ACC Academic Team. The team finished the season 4-10 and 2-3 in the ACC.

Katie Hazelton filled the position as diving head coach after 38-year head coach Julian Krug retired. Originally from Harpenden, England, Hazelton came to the program with experience working for the 2012 London Olympic and Paralympic Games as diving technical operations manager. She later spent over four years at Duke’s amateur diving club — which was named the country’s most improved club by USA Diving in 2014.