The Pitt News • May 30, 2018 • https://pittnews.com/article/132384/sports/a-new-path-for-champions-lyke-discusses-renovations-new-hires-athletic-culture/ 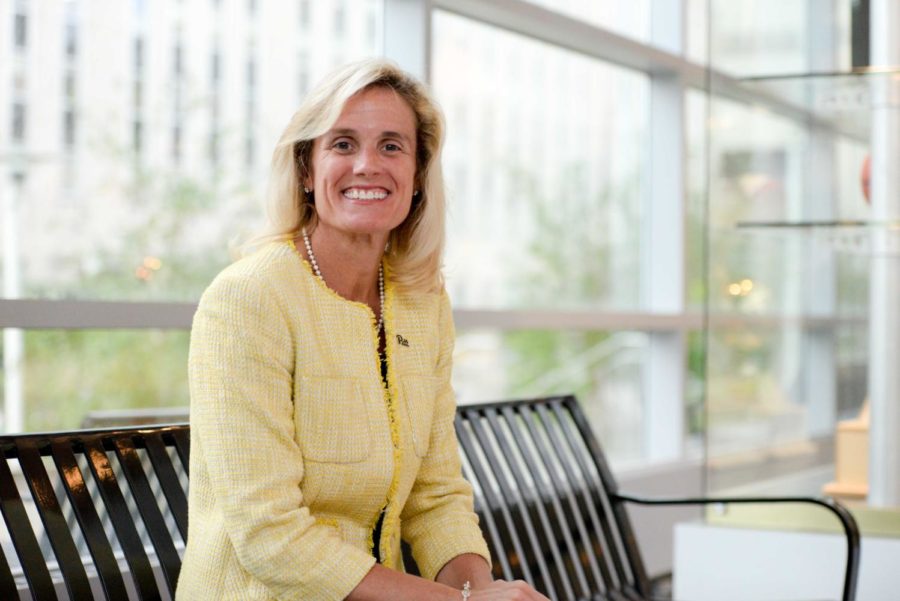 Heather Lyke discussed her ideas for the flipping of the Pete during a roundtable discussion. (Photo by Jordan Mondell)

As Pitt’s highly anticipated McCarl Hall of Champions is under construction, Panther fans can expect the changes to continue — Pitt’s athletic innovation will extend up “cardiac hill” to all athletic facilities.

In a question and answer roundtable discussion between Pitt athletic director Heather Lyke and the media April 25, Lyke presented several future plans the athletic department plans to enact as early as the 2018-19 season.

The plans were presented as a collaborative, University-wide project called “Victory Heights,” which Lyke said was still in a “silent phase” of development — meaning the master plan was still on paper. This project includes improvements to on-campus facilities like the Fitzgerald Field House and new projects that would provide updated facilities for student athletes.

“We’ve got an unbelievably strong coaching staff and they’re doing the best they can, but when you don’t really have a facility that you’re recruiting to, you have some limitations,” Lyke said. “Competitive facilities — it’s our teaching environment, it’s where our coaches teach every day, so you need technology, state-of-the-art equipment, medical care, nutrition, sports psychology and all of that — we were just behind.”

As the ACC Network launches a television station in connection to ESPN in the fall of 2019 across 15 campuses in the nation, there are major infrastructure costs that require investments from the schools. Multiple Pitt sports events are expected to broadcast at this national level, and in order to accommodate the necessary equipment for an endeavor like this, fans will see an in-house ACC Network studio specialized in producing sports content as they enter the doors of the Pete.

The changes for the ACC Network aren’t just for the front of the house of the Pete — they continue onto the court as well. Leading the roundtable meeting with her current and most concrete plan of the “Victory Heights” project, Lyke presented a renovation of the Pete’s court. She hopes a new layout will better include the students of the Oakland Zoo when they are broadcasted on national television in the future.

“You build the brand of Pitt not just as an athletic department but as a university, and the exposure for all of us is going to be exceptional,” Lyke said. “We’re a little bit far behind, so it gives us a chance to catch up with some of the other conferences that have that national media opportunity.”

In addition, the department will reseat the arena, add Wi-Fi to the stadium and renovate the floors of the court — but Lyke will leave the public guessing about the color scheme, hinting that it may be the vintage school colors.

“[Capel and White] were very interested in Pitt because they know what an unbelievably intimidating place the Petersen Events Center is to play,” Lyke said. “But I don’t know if the media or the national fan knows because our camera does not showcase the Pete as well as it could.”

The reach of the ACC Network at Pitt doesn’t stop at the Pete. With multiple broadcasting opportunities across the several sports venues utilized by Pitt, several miles worth of cable and wire will run through campus in order to cover all sports events from the central ACC Network studio hub at the Pete. The public can expect to hear a full overview of the project, informally called “Pitt Studios,” as early as September 2018.

Another part of “Victory Heights” is the construction of a new building to act as a center for human performance. This new state-of-the-art building would be used for strength conditioning, sports medicine and possibly collaborative human performance research with the University.

As far as sporting events, a new 3,000-seat arena will be implemented for volleyball, wrestling and gymnastics teams in the new building — as well as an indoor 300-meter track.

All of these adjustments to Pitt’s athletic facilities circle back to Lyke’s idea of a culture of comprehensive excellence in the department, which she discussed at the beginning of the roundtable discussion.

“Culture is made up of your people — the people are what define a culture,” Lyke said. “Getting the right people who believe in what we’re doing and believe that we can be absolutely competitive in the ACC — that’s what we aspire to do across our 18 teams.”

With the recent additions of Capel and White, Lyke says it is critical to solidify a strong foundation of leaders across the department that understand the expectations and have the same belief system in success.

But, having the right people is just one half of it — the other half is creating environments in which the coaches are able to carry out the visions of success they share.

“The goals are really to transform the student athlete experience here at Pitt — to show a demonstrative commitment to comprehensive excellence from the facility standpoint,” Lyke said. “Our plans are very exciting, bold, necessary and transformative.”