SGB President Maggie Kennedy is ready for the year ahead 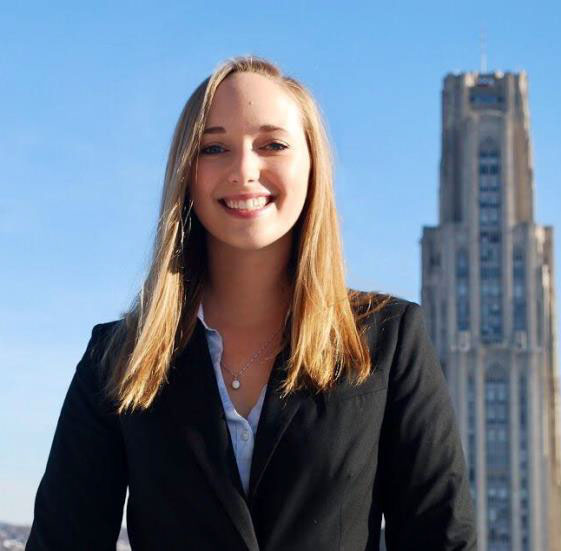 Maggie Kennedy is Pitt’s SGB President for the 2018-19 school year. One of her top goals is to focus on increasing student engagement with SGB. (Photo courtesy of Maggie Kennedy)

Maggie Kennedy has hardly had a chance to relax since winning Pitt’s Student Government Board election in February. Kennedy, a senior political science and communication rhetoric double major at Pitt, has spent most of her time over the last three months meeting with University officials and Student Government Board members in preparation for her new regime in the fall.

Former SGB President Max Kneis has been instrumental in helping Kennedy prepare for the upcoming year.

“We met probably once a week, starting I guess at the beginning of March, like right after spring break through like the end of the year,” Kennedy said. ““I want to say we had like 200-some interviews for the various positions that we have. So it was a really busy transition, but Max was definitely very helpful.”

One of the most important things Kennedy is trying to improve on next year is student engagement with SGB.

“I think for next year I really want to make sure that we increase collaboration across campus, like that’s a thing that we talk about every year,” Kennedy said. “But I think some of the ideas that our incoming board members have about that specifically will really help us do that.”

Some of those ideas include boosting attendance of student organization leaders at SGB meetings and increasing awareness of the Panther Program of the Month — an award given by SGB to a Student Organization Resource Center-certified Pitt program that provides it with advertising on the student affairs screens and catering for the program’s next meeting.

One of Kennedy’s more personal goals for next year is to improve resources for the humanities at Pitt. She wants to look at how Pitt’s resources compare to other schools and reevaluate them based on what the research finds.

“What I want to do is complete whatever benchmarking research is needed to compare what other universities have regarding [arts] practice facilities, dance practice facilities, things like that and try to figure out what we can do to better that situation at Pitt,” Kennedy said. “Specifically, I’ve had experiences with the practice rooms that haven’t always been the best … they’re not maintained super well.”

To continue her focus on the humanities community at Pitt, Kennedy said she would like to implement a humanities research fair, similar to research fairs held for science, math and engineering students.

“There isn’t a lot of overall University support for students doing research in humanities and sometimes it’s harder for those students to find research,” Kennedy said. “So, we want to see what we can do to try to establish a research fair based off of the same model that STEM departments do.”

One of the most prominent issues of Kennedy’s campaign for SGB president in the spring was reforming sexual assault education on campus. Kennedy, who served as wellness chair last year and is a member of Students Engaging in Conversation about Consent and Sexuality, said she wants to implement a different way of addressing sexual assault by working to change the way sexual assault is addressed to first-year students.

“I think we have a really strong emphasis on bystander intervention, which is important that we teach students, but that is a reactionary approach and students don’t necessarily always find themselves in a situation where they see something’s gone wrong and they’re able to stand up and save the day and everything is OK,” Kennedy said.

Instead, Kennedy wants to focus on changing the culture around sexual conversations and behaviors to try to prevent sexual assault in the first place.

“I don’t necessarily think that can be fixed in a year. But I think if we increase the conversation in first-year orientation about healthy relationships and signs of having a healthy relationship … that will help students be more prepared and understand basically what’s right and what’s wrong,” she said.

Pitt hosts events every year during sexual assault awareness month in April, and Kennedy wants to increase programming throughout the year.

“What I’d like to do is see if we can have more pop-up programming and awareness events throughout the year and not just in April,” she said. “If you only have programming for this topic during that last month [of school], it’s not quite as effective as it could be.”

Kennedy is currently studying abroad in France, and she won’t be back in Pittsburgh until August. But that won’t stop her and other members of SGB from starting to work on programs and initiatives for the fall.

“In the fall SGB typically does a wellness and safety fair in September and our big mental health awareness month in October, so some of that planning does need to start over the summer,” Kennedy said. “Any board members, committee chairs as well, anybody is welcome to work on a project that they know they’re going to be working on next year.”

Looking forward to next year, Kennedy reflected on what she learned last year to prepare her for her new position as SGB president during the 2018-19 school year. As wellness chair, she said she had to attend meetings with members of University administration for discussions on sexual assault, mental health and other initiatives. Those meetings, she said, taught her to be confident that she belongs in the room making big decisions.

“If we don’t say anything then they might not ask,” she said. “So recognizing and trying to be more confident in those positions is something huge that I learned this year.”