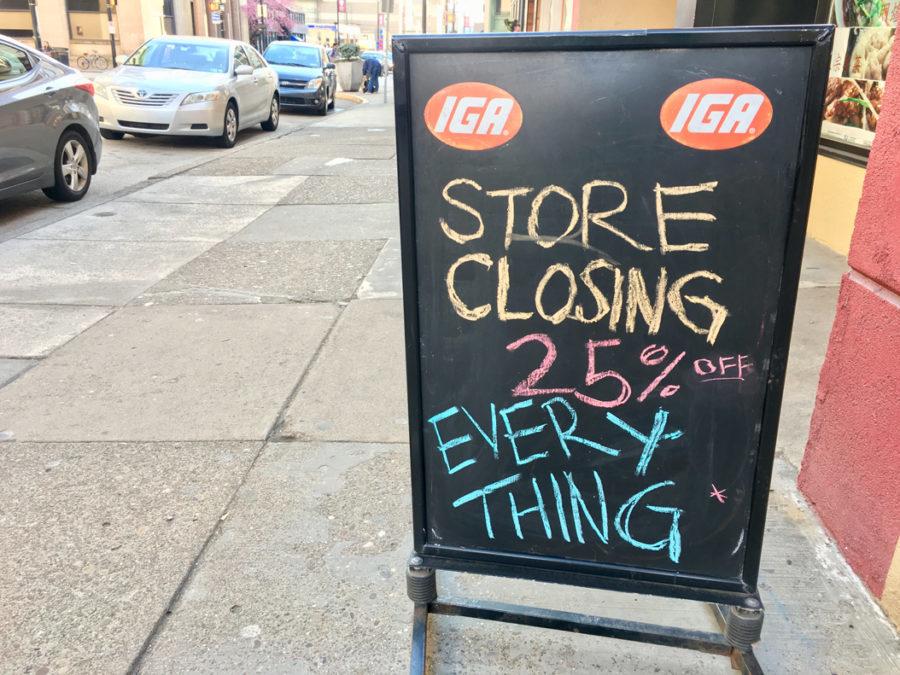 The Market on Forbes IGA closed last April after nine years of serving the Oakland community. While students appreciated the convenience and location of one of the few food markets in Oakland, competition with bigger grocery stores made it difficult for IGA to stay open. (The Pitt News File Photo)

As Pitt transitions into the fall semester, students can finally stop mourning the loss of 7-Eleven and welcome the new grocery store that is coming to Forbes Avenue. Although Slurpees will no longer be available, fresh fruits and vegetables will soon enter the Oakland scene.

Jim Earle, Pitt’s assistant vice chancellor for business, said the grocery is currently in its final design phase and will start construction in June. They plan on opening the store in September after student move-in ends — and Earle assured that unlike a convenience store like 7-Eleven, this will really be a grocery store.

“We’re really focused on bringing students freshness,” Earle said. “So there’ll be fresh vegetables, fresh fruit, meat [and] fresh fish. The idea is that you’ll be able to do your grocery shopping here in Oakland and not have to take a bus or Uber to Shadyside, which is really why this was created.”

Oakland residents used to have an IGA grocery store on Forbes Avenue near The Exchange and Supercuts — but when the grocery closed in April 2017, shopping became harder.

“When the IGA went out of business, we heard from a lot of students that grocery shopping was really difficult and that it would really help to have a grocery store in Oakland,” he said.

Some may even consider Oakland to be a “food desert” — defined as an urban area in which it is difficult to buy affordable or good-quality fresh food. But Judith Dodd, an assistant professor in the department of sports medicine and nutrition, argues that Oakland doesn’t technically qualify as a food desert, considering the proximity of stores like Rite Aid and CVS, which sell limited groceries.

“This is not the traditional food desert,” Dodd said. “Yes, it fits the description, but there are resources available within walking and easy bus transportation. Think about [sic] what if you lived above Interstate 80 and you didn’t have a car. That’s a food desert.”

Earle said the grocery will also offer a deli section with fresh meats as well as a bakery section, which will replace the Oakland Bakery that is currently on Fifth Avenue.

“We have been stressing that we want it to be very fresh — something that students will just want to stop by after class and pick up chicken for the grill or steaks or whatever it might be,” he said. “Fresh fruit for their dorm rooms, vegetables … they’ll be able to get them right here and take it back to where they live.”

Dodd raised the issue of student access to proper storage and refrigeration. Although fresh fruits and vegetables are a much healthier alternative to heating up pre-packaged meals from Market-to-Go, having only a small fridge and microwave may not suffice for keeping the fresh produce safe and secure.

“One of my concerns is that we want [this grocery] but what do we do with a whole head of lettuce or a whole zucchini if you’re living in an apartment or a room and have only a single burner and a tiny refrigerator and no freezer,” Dodd said. “I’m not so sure it’s going to make any great impact unless people are [in need] of those things.”

With the new grocery in place, Earle said Market-to-Go will still be open 24 hours as a replacement to 7-Eleven and the new grocery will have a broad range of daytime hours.

“You go down to Market-to-Go all the time, but the fruits aren’t necessarily fresh and you can’t get things that you can kind of make,” Gannon said.

Gannon did say it’s important that the grocery store be affordable since its clientele will be mostly college students.

“Even if you can’t necessarily afford things you might find at a grocery store, if they’re fairly priced produce, that would be really beneficial for students especially when budgets are tight,” Gannon said.

Earle said the grocery will accept both Panther Funds and cash, and that the University is committed to being competitive with Giant Eagle and Trader Joe’s. Because the store is something that affects all students, Earle said he believes the grocery will be a tremendous addition to campus.

“Both on- and off-campus students will shop here and be able to get items they want and need,” Earle said. “Part of our strategic plan for Pitt is building strong communities and I think this helps in that regard as well. Making it easy and accessible for our students to get fresh food is a huge win.”