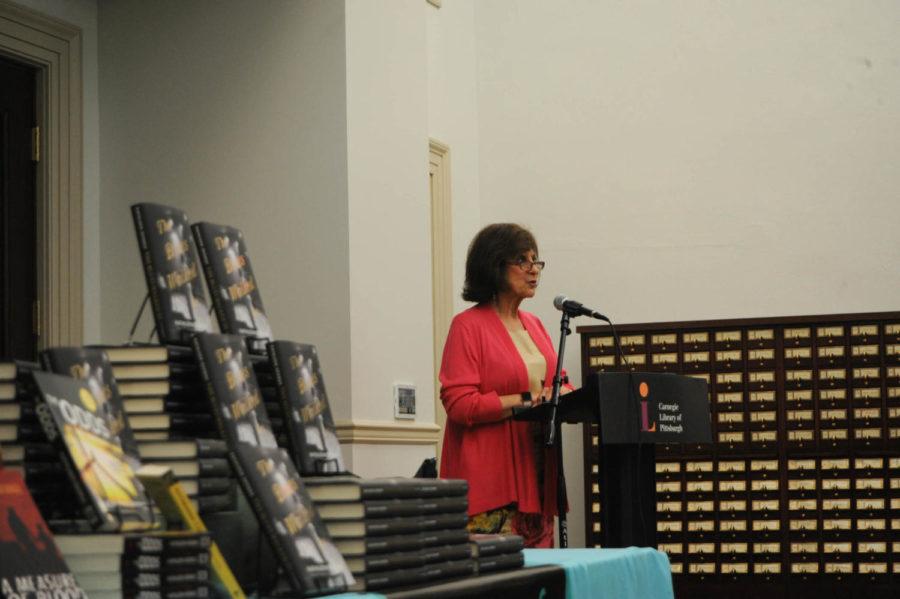 Kathleen George, a tenured Theatre Arts professor at Pitt, spoke at Carnegie Library for the launch of her latest historical fiction novel, “The Blues Walked In.” (Photo by Anne Amundson | Staff Photographer)

In front of a crowd of about 50-60 people in the South Wing Reading Room of the Main Carnegie Library, Pitt theatre arts professor Kathleen George spoke to the audience as she held a release for her new book.

“The Blues Walked In,” is a fictional story based life of the real-life famous jazz singer, Lena Horne, set in the Hill District of Pittsburgh. The story revolves around Horne’s time in the Hill District and her relationships with her two best friends, Marie David and Josiah Conner.

The talk began with George explaining why she became interested in Horne’s story. One of the biggest reasons was because Horne was an angry woman who was able to gracefully manage that anger, which reminded George of her own mother.

“Some people just are angry people, you know,” George said. “So I kind of made a connection and I thought how exciting it would be to put somebody like my mother in a book with Lena Horne.”

In order to write the book, George read copies of the Pittsburgh Courier, the now-defunct African-American newspaper in the City of Pittsburgh, going back to the 1930s. The Courier was the nation’s second-largest African-American newspaper then, second only to The Chicago Inquirer. She also read Horne’s autobiography and two books by her daughter — and accepted some unexpected help from a woman she met at church.

“I had a woman from my church and I said, ‘I heard that Lebanese and Syrian people lived in the Hill,’ and I asked her, ‘Do you know anybody that did?’ and she said ‘I did! Let’s go to lunch!’ Then we went to lunch and I asked her all kind of questions,” George said.

George discussed how the Hill District was a mecca for jazz musicians when Horne was alive. She was exposed to musicians like Billy Eckstine and Billy Strayhorn when she lived in her father’s hotel, The Belmont. The hotel also hosted jazz greats, like Count Basie and Duke Ellington.

George also spoke about the hardships Horne endured, like her contentious relationship with her father, racial discrimination and her own complicated racial identity as a light-skinned black woman.

“She had a hard time. Also, it was just not easy for her in so many ways that I didn’t even write about, like having to sit on crates and not being allowed to go into certain places that the white man ran because some places wouldn’t let her in,” she said.

Yu Yang, a transfer student majoring in computer science, was one of a few Pitt students in attendance. She decided to come after seeing the event posted online.

“The best part about tonight was when she read her book and let us listen to Lena Horne talk on her album, it gave me a lot of information on that,” Yang said. “I am new to this country. It’s just so informative about the history of the conflict of women in this nation.”

“The Blues Walked In,” is the 10th novel George has written while a professor at Pitt. She also served as the interim dean for the theatre arts department at the University in the fall of 2017. Ashley Martin, an operations manager in the theatre arts department who works with George, has always been impressed with how much George has been able to handle in her career.

“Just the sheer number of books she’s published, I had no idea it was that many,” Martin said. “And her capability to balance a wide range of skill sets that she has from being able to step in as the department chair … then to go and write novels and then to be able to work in theatre and write plays and keep people working in our field.”