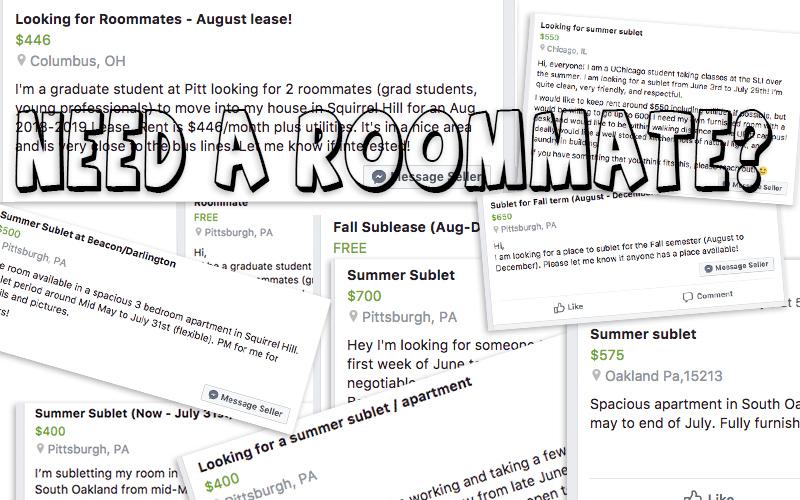 For students searching for the perfect summer or fall apartment to sublet, scrolling through pages and pages of listings on Facebook or Craigslist can be an exhausting and difficult process. And for those looking for someone to sublet their place while they are away, their posts are often pushed to the bottom of the page, overwhelmed by everyone else’s desperate sublet inquiries.

Pitt alumni Asim Viqar and Shil Patel experienced these same difficulties when searching for places to stay on campus during the summer months, inspiring them to launch their own site, sublttr.com, this past March. Through this resource, students in the Pittsburgh or Philadelphia area can post listings or search for places that fit the criteria they are looking for.

“We realized the limitations of the various Facebook groups that are out there,” Viqar said. “To solve the problem we decided that a website dedicated to finding and posting sublets could really make this problem a lot easier for students around the country.”

Interested subletters can filter the listings by selecting the season they’d like to sublet in, their maximum price range, the number of bedrooms and bathrooms, as well as roommate preferences. Each listing also features a map of the surrounding area and an interactive street-view setting.

The summer after their junior year in 2016, Patel and Viqar — then roommates — both had internships at Penn Medicine at the University of Pennsylvania and needed to find someone to sublet their apartment in Pittsburgh. They posted a listing on Facebook, but with exams coming up and plenty of people searching for subletters, it became difficult to find anyone. The two ended up stuck paying rent for two months in an apartment they weren’t living in.

Viqar said he thinks Sublttr is a safer alternative to something like Facebook or Craigslist because in order to create an account, the site requires people to sign up with a “.edu” email address.

“This allows us to ensure that the website is exclusive to students, whereas with Craiglist you don’t have a lot of assurance when you’re posting for an apartment,” Viqar said.

On Craigslist, Patel said he has seen a lot of landlords post cheap apartments near the Cathedral of Learning, but he said these are often scams.

“A lot of landlords will crop their pictures and do things that may be misleading,” Patel said. “With Sublttr, it’s all people who are associated with the University and are typically not trying to make money off of this, so you feel a little more comfortable with the people that you’re talking to and what you’re seeing is really depicted as what it is.”

To further ensure safety, Sublttr allows people interested in an apartment to contact the person who posted the listing in a small textbox, but the person’s email address is not visible.

Patel also said he and Viqar spent a lot of time discussing how to make the site easy for anyone to use and asking other students what they’re most interested in seeing when searching for an apartment.

“[Viqar] and I went back and forth figuring out how to organize the data without overwhelming people,” Patel said. “The street-view option is really cool because you can see what the area looks like and you can see pictures inside and even outside the apartment. Our goal for the next year is to see what else we can incorporate to the website and making changes based on feedback we receive.”

Viqar stressed the ability to filter search results with Sublttr as a major advantage over Facebook’s housing pages.

“[If you] click the filter button, then it really narrows down your results and helps you find an apartment that matches your specific criteria,” Patel said. “That’s one of the issues we saw with Facebook. There’s no way to narrow your search. If you go to a group that’s dedicated to Pitt students subletting, you are just presented with a continuous list of options.”

Current subletter Sean Tighe — a rising junior bioengineering major — completely avoided using any online resources to find the apartment he is subletting this summer. He said he considers himself lucky because he found his sublet by asking his landlord for next year if he knew of anything available — and fortunately, he did. But Tighe has had issues in the past with subletting.

“Last year when I moved in, I found out I would be living in the basement, which was alright because it was nice and cool down there,” Tighe said. “But it was also really sketchy and we ended up getting spiders and centipedes, and it was kind of gross. But it was just the summer so if you can tough it out, then it’s fine.”

But if Tighe got into a more desperate situation where he needed to either sublet his own apartment or find a sublet, he said he would use Sublttr.

“[When] I was trying to sublet this apartment I’m in right now, I needed to fill space because there’s like four bedrooms,” Tighe said. “So if I needed that filled up, I would [have] definitely used [Sublttr] because it was getting close to the end of the spring semester, and I still needed one more person.”

Viqar and Patel plan to expand the site so it is accessible to students in other cities, not just Pittsburgh and Philadelphia. They said the site has received a lot of positive feedback, and that they will continue to market it to local employers and internship programs. In particular, Viqar said one of his goals for Sublttr is that it serves as a central place where anyone from around the world can access it to find sublets.

“I think this problem exists in all schools across the country,” Viqar said. “People come to schools from around the world, and knowing that there’s this central place called Sublttr for whatever city you’re going to [would be] really useful.”