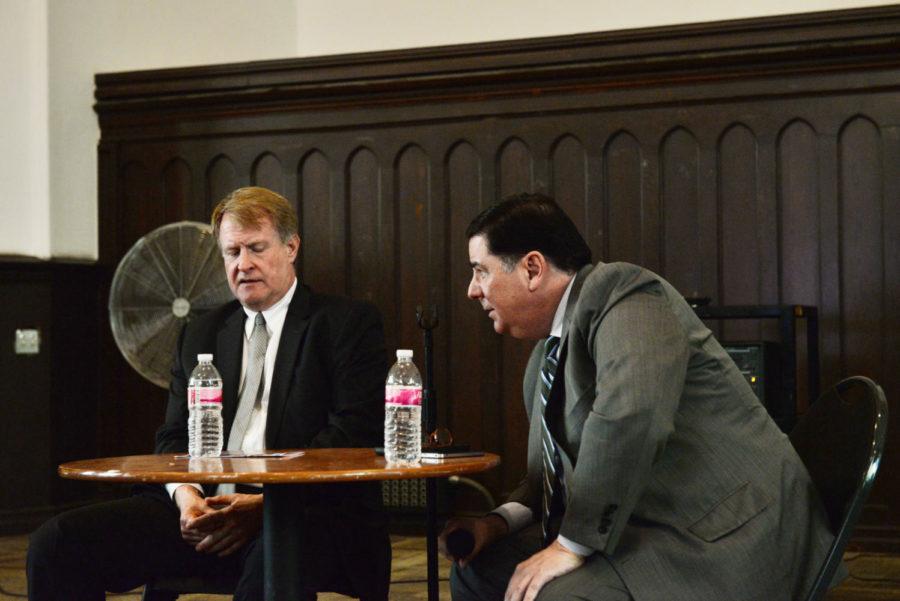 Citizens had a chance to address pressing issues like Amazon, small businesses and the ethane plant in Beaver County with some of Pittsburgh’s most important figures — Mayor Bill Peduto and Allegheny County Executive Rich Fitzgerald — Monday night at Union Project in Highland Park.

Peduto, Fitzgerald and mediator Pascale Joseph, sat at the front of the Union Project’s room with an audience of 80 people — a mix of Pittsburgh’s Urban Magnet Project members who got in for free and nonmembers who paid $10 for entry. Joseph sits on the board of directors for PUMP — an organization aimed at increasing diversity and community involvement.

Arthur Pang, the chair of PUMP’s board of directors, said that the organization’s 30,000 members wanted to hear about the transit system, sustainability and voter education.

“Those topics are important to bring up because the question of how do we attract and attain top talent here, and how do we make this a city for all,” Pang said. “We’ve got a lot of great institutions at the university level, but there are challenges at secondary education.”

Both were asked 10 questions in total, a combination of prepared questions and audience questions from blank cards that were offered at the event. The event was Facebook live-streamed by PUMP and is available on its Facebook page.

ULYP President Shenay Jeffrey said African American representation and inclusion is essential, which is why it’s important they were represented at the town hall.

“We still have a lot of work to do to make sure [African Americans] are included, to make sure that their voices and their needs are heard on every front, but also to be represented in those spaces,” Jeffrey said. “Making sure they are represented in politics … in housing, in health, in education all of those things, we want to make sure we’re there making sure we help shape the policy.”

Fitzgerald and Peduto both said they support Amazon’s potential arrival in Pittsburgh, but specified they want to ensure the City benefits from the deal. Peduto said he wouldn’t support the bid if it didn’t help Pittsburgh, and Fitzgerald said that Amazon would help pay for the City’s needs, such as its water lines.

“The other thing with adding 50,000 jobs, which obviously there is a multiplier effect that would bring more in, allows us to broaden out the tax base and the rate payer race to pay for a lot of the infrastructure needs,” Fitzgerald said.

Fitzgerald supported the plant but said the environment also needs protected according to EPA and DEP regulations. Peduto said air quality was important to him and pointed out that because Beaver County is not within his jurisdiction, his voice on the matter does not have much weight — and could even hurt environmental progress in Pittsburgh.

“When I look from help from the federal government in the Department of Energy, a congressman who is upset because I spoke out where he represents is not going to help me,” Peduto said.

Both Peduto and Fitzgerald were asked at the end of the town hall about what they’re most excited to be working on.

Fitzgerald said he has been excited to see young people coming to Pittsburgh and staying, saying that when he graduated from Carnegie Mellon University in 1981 that was not the case.

“It’s really been in the last five to 10 years that we’ve seen a resurgence of young people staying and young people coming here, and I think energy and optimism about Pittsburgh’s future is what I most get excited about,” Fitzgerald said.

In turn, Peduto said he has been proud of how Pittsburgh came out of a 30-year decline and his opportunity to manage a city on the rise.

“I’m very cognizant, though, that you have to manage with one foot on the gas pedal and one foot on the brake,” Peduto said. “Growth is very much like cholesterol, there is good growth and there is bad growth, and making decisions on individual and independent projects and programs is absolutely crucial in understanding that there is no one size fits all and there is no magic tool that can fix all the problems.”

Penn State history and political science major Cheryl Stephens, who is a Highland Park native and took notes during the event, said she came because she believes it is important to know what is going on in the community politically — especially since she is 25 years old and one of the young Pittsburghers Fitzgerald was talking about.

“For me, it was just good to sit and hear the questions that I care about and those be addressed by Mayor Peduto and Executive Fitzgerald,” Stephens said. “I get that it’s a community effort no matter what’s going on in the City, and it just gave me a different perspective to hear how they address things like energy or things like early childhood development.”

Stephens was inspired by the passion of the community, noting the importance of public town halls like Monday’s.

“We’re the ones who are going to be making the decisions for our lives, so I think that it’s important to come out and be involved. I saw that other people were involved too and that’s really motivating,” Stephens said.