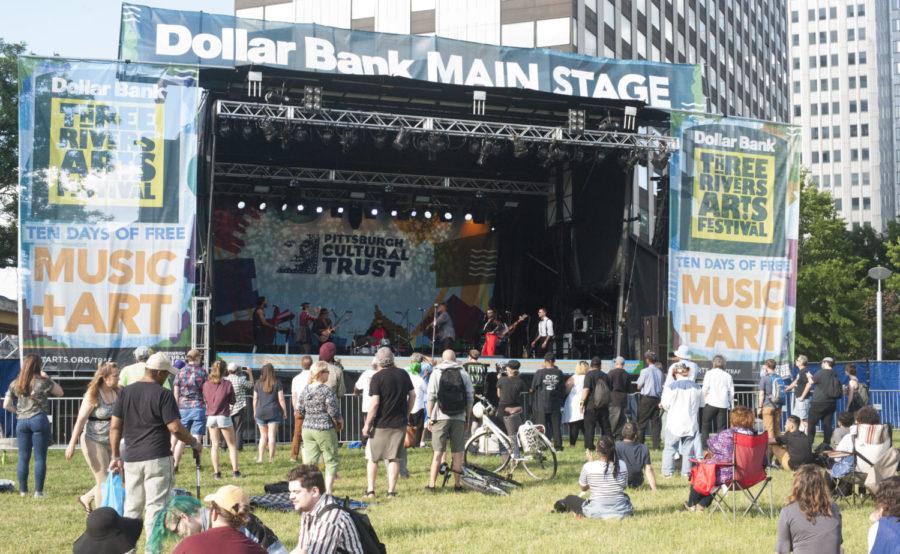 The City of Pittsburgh’s North Side was filled with the sound of country music and the sight of about 25 tons of trash this past weekend as the Kenny Chesney concert took over Heinz Field and the surrounding parking lots for tailgates. But across the river from the hard-partying country fans, a different crowd was celebrating music, arts and food.

This annual celebration, the Three Rivers Arts Festival, fills Point State Park and the Cultural District with artists of all genres and media types, as well as patrons eagerly shopping for handmade art. It is a 10-day free event sponsored by the Pittsburgh Cultural Trust, and it attracts thousands of guests each year.

Having amassed over 86,000 followers during his nine years on Twitter, photographer Dave DiCello has become known by Pittsburgh natives and new residents alike for capturing cityscapes framed by fantastic sunsets, dramatic lightning strikes and the lush nature that Pittsburgh has to offer.

While DiCello can normally be found around the City trying to secure photos of perfect moments with his camera, his office for the week is a crowded booth at the Three Rivers Arts Festival.

For artists like DiCello, whose main form of promotion has been his social media presence and his gallery on the first floor of the Highmark Building — Fifth Avenue Place — the festival provides a unique opportunity to share his work in person and interact with his patrons.

“It’s a long week, but it’s fun and I look forward to it every year,” DiCello said.

Unlike artists working in other media, DiCello’s work demands great amounts of observation and luck to get the best product. Whether it’s chasing storms, rainbows, sunrises or sunsets, DiCello attempts to calculate the right moment for the perfect shot.

“For every double rainbow you see, I’ll have gone into the City 20 times and missed it,” DiCello said. “When you’re up early and you’re out late, you see a lot of cool things.”

For some Pittsburghers, one of DiCello’s cityscape photographs can be the perfect souvenir to remind them of home. For others, a souvenir can come in the form of a vivid painting of a Primanti Bros. sandwich.

This is the specialty of Pittsburgh painter Katie Koenig, a graduate of the illustration program at the esteemed Savannah College of Art and Design. After graduating and moving back to Pittsburgh, her hometown, Koenig worked as a freelance illustrator before deciding to focus on food.

“I did a painting-a-day challenge, and the challenge of the day was a peanut butter and jelly sandwich,” Koenig said. “As I started to do things like that, people really reacted to it and the sense of humor behind it.”

The walls of Koenig’s Arts Fest booth are decked with still-life paintings depicting food and drink, which feel right at home in the City of Pittsburgh. Her own adaptation of a Warhol-esque Campbell’s Soup can, a glass bottle of Heinz Ketchup amid the agonizing pouring process and an ice cold bottle of Iron City Beer call Pittsburghers in to look at her welcoming art.

Like DiCello, Koenig’s experience at the Arts Fest is a perfect way to interact with patrons. For her, these interactions grant her valuable feedback on her work.

“I really enjoy talking to people,” Koenig said. “I think if a sale is going to happen, it’s because someone is really connecting with a piece of merchandise that I have and getting to know what it is that they connect to and what memories they have. It’s a lot of fun for me.”

For festival-goers looking for unconventional items, artists like Adam Waddell deliver. Among Waddell’s creations are necklaces containing preserved wasps and seahorses and ceramic works depicting everything from cats to cacti.

“I mainly focus on ceramics in the winter and jewelry in the summer,” Waddell said while absentmindedly twisting a piece of metal into a necklace.

With the help of his girlfriend, Waddell takes his work to festivals in the Pittsburgh area and runs an Etsy shop. As an artist who creates affordable and trendy products, Waddell feels that the Arts Fest is a perfect opportunity for sales.

“It’s a great crowd, so we usually end up doing pretty well. The money that we generate through the show, we put back into the business.”

The festival has something for fans of every realm of the arts. In addition to the artist vendors, guests can check out live music ranging from local artists like roots-folk sensations Buffalo Rose to national acts like soul singer Valerie June.

Mavis Staples kicked off the festival’s music section Friday evening with a performance at the Dollar Bank Mainstage at Point State Park. Other popular musicians have performed at the mainstage since Staples’ performance, including British pop band Everything Everything and the Pittsburgh Symphony Orchestra.

One student at Pitt’s School of Dental Medicine, Diana Truong, originally from Houston, enjoyed having the opportunity to take part in the Pittsburgh tradition.

“The City is beautiful and the musicians are great,” she said. “This is the perfect summer event.”

The Three Rivers Arts Festival will run through this week and conclude on Sunday, June 10. Artist booths and live music can be found at Point State Park, Gateway Center and the Pittsburgh Cultural District. This week, the Dollar Bank Mainstage will feature musical guests Lukas Nelson & Promise of the Real on Wednesday, Sidewalk Chalk on Thursday and Valerie June on Friday.