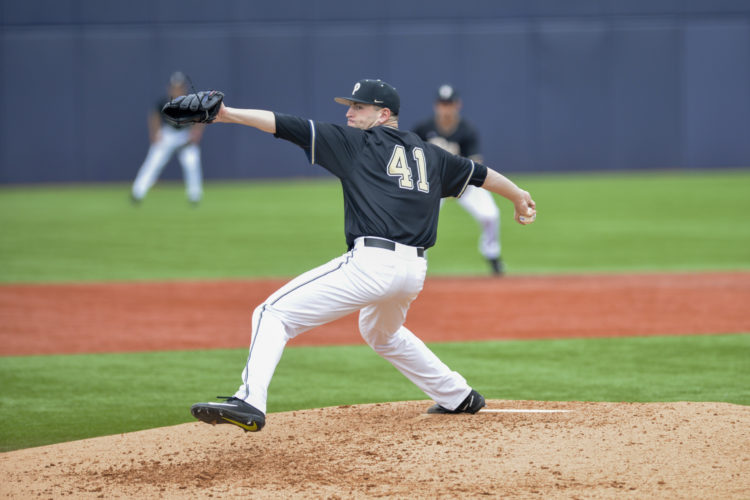 Redshirt senior Matt Pidich was selected with the 192nd pick in the eighth round by the Cincinnati Reds. Pidich is the first player in Pitt baseball history to get drafted by the team. (TPN File Photo)

Two Panthers were selected into the MLB on the second day of the 2018 draft, marking the sixth year in a row that Pitt has had at least one player picked to join the league.

The Houston Astros drafted Pitt rising junior relief pitcher RJ Freure in the sixth round with the 192nd pick of the 2018 MLB Draft Tuesday afternoon, making him the fourth Pitt player in program history selected to the team.

“It’s an honor to be given this opportunity to play professionally and I would like to thank my coaches for helping me and showing me how to become a better player and person on and off the field,” Freure said in a press release.

As a freshman, the Ontario native threw 38.0 innings in 21 appearances out of the bullpen, while also striking out 46 with a wins/loss record of 4-1 and a 4.74 earned run average.

After making 27 appearances in the 2018 season, Freure reached the second place all-time record for most appearances in a single season. The sophomore held opponents to a .227 average, striking out 95 players over 58.2 innings with a 4.30 ERA.

Over his career as a Panther, Freure ranks 20th all-time for appearances in the program’s history with 48 appearances.

“In my opinion, RJ has a major league pitch in his breaking ball, and couple that with a mid to upper 90s fastball, when he develops his consistency and potential of a quality third pitch, he’s a big league pitcher sooner than later,” said baseball head coach Joe Jordano in a statement.

Matt Pidich, a redshirt senior, was selected with the 192nd pick in the eighth round by the Cincinnati Reds, making him the first player in Pitt baseball history to get drafted by the team.

“I am truly grateful for this opportunity to continue to play the game I love,” Pidich said in a press release. “For as long as I can remember it has always been a dream of mine to play professional baseball and now that dream has come true.”

Due to an injury and rehabilitation following Tommy John surgery, Pidich’s baseball career was put to a halt in 2016 during his sophomore year. But, when he returned as a redshirt junior the next year, he made 16 appearances and finished the season with a win/loss record of 4-5 and a 4.61 earned run average.

As Pitt’s Opening Day starting pitcher against Oakland, Pidich started his redshirt senior season throwing 6.0 frames of one-run baseball, allowing three hits, two walks and striking out seven of his opponents. He finished off the 2018 season with a 3.05 ERA and 91.1 innings — tying him for 11th most innings pitched in a single season in the program’s history.  With 99 strikeouts,Pidich is also tied for third most strikeouts in a single season.