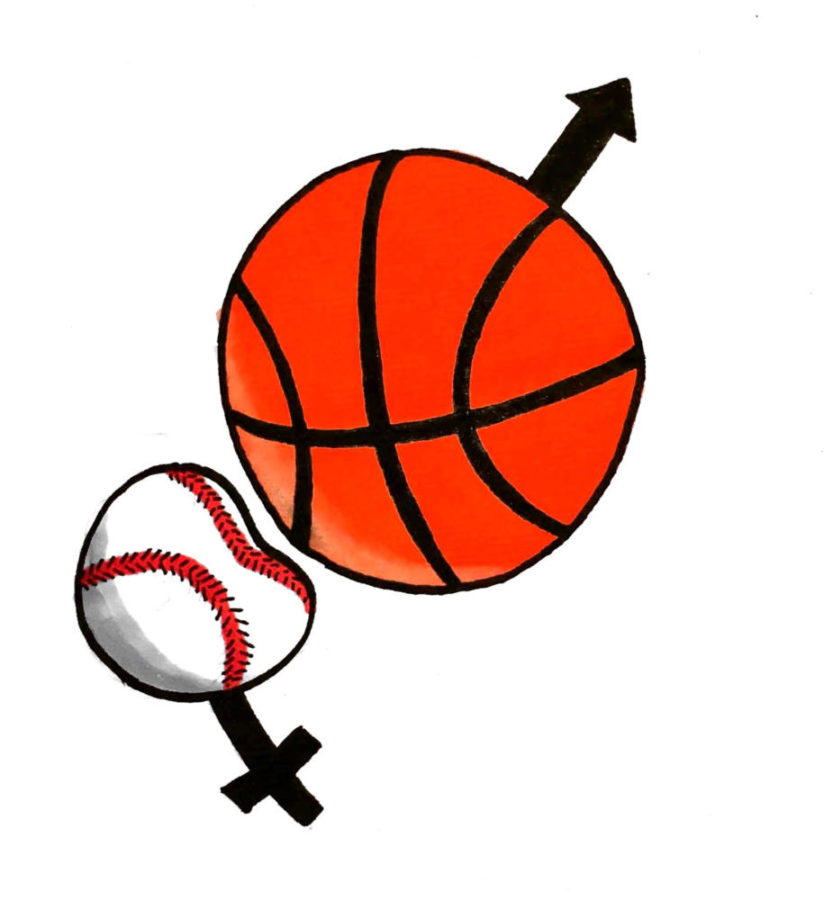 “You play ball like a girl,” said “Ham” from “The Sandlot,” settling an intense roast battle against the baseball uniform-wearing rich kids with what seems to be the greatest insult one could possibly say to someone in 1962.

But the insult is two-fold.

Female athletes face a deeply entrenched societal idea that a fine line exists between sports played with grace and those played with grit. And apparently, playing a sport like a girl is equivalent with being an inferior athlete — one that lacks the strength and aggression it takes to be successful in sports. Traditionally, sports have reinforced heteronormative culture, and although the extent of this has lessened over time, there still remains a great potential for equality in athletics that has yet to be achieved.

When the Women’s World Cup broke the glass ceiling of females in sports media in 2015 with 750 million TV viewers, it was a major breakthrough for women’s soccer. But that was nothing compared to the 3.5 billion viewers of the Men’s 2014 FIFA World Cup — known to most as simply the World Cup.

Mainstream broadcast coverage of women’s sports gets pushed to the sidelines. In a study by the University of Southern California, researchers discovered that Los Angeles-based networks and their affiliates devoted only 3.2 percent of airtime to covering women’s sports. Not only does game roundup coverage remain minimal at an average of 77 seconds, but the boring and uninspiring portrayal of the sports encourages viewers to tune out. Considering about 40 percent of professional athletes are female, this amount of airtime fails to fully highlight and analyze a female athlete’s athletic accomplishments.

“It seems at first that it’s respectful, but if you compare the framing with men’s sports, women are talked about in a much more boring way,” said Michela Musto, the study’s lead author. “There is no joking or complimenting. Those kinds of descriptors are missing from women’s sports.”

Frankly, female sports only receive a global media coverage craze once every four years at the Summer Olympic Games. But even between Katie Ledecky’s record-breaking swims and Usain Bolt’s nine gold medals, sexism in the 2016 Summer Games coverage buzzed among viewers the most.

While the U.S. Gymnastics Team awaited their scores, NBC’s Jim Watson commented, “They might as well be standing around at the mall.” Not long after, NBC’s Rowdy Gaines said, “Some people say she swims like a man,” as Ledecky broke a world-record in the 400-meter freestyle.

In a study published by Dr. Cynthia Frisby of the University of Missouri, she found that sexist microaggressions, or insulting verbal or nonverbal messages aimed at marginalized persons, in the media toward female athletes increased 40 percent between the 2012 Summer Olympic Games and the 2016 Games.

“Results seem to imply that coverage of the female athletes focused on policing behaviors acceptable for the female gender and whether or not women were adhering to these expectations,” Frisby said.

From comments regarding a woman’s overwhelming aggression on the field to questioning a woman’s body weight, Frisby found that the microaggressions fell into seven categories — objectification, second-class citizen, restrictive gender roles, sexist and racist jokes, focus on traditional female appearance, focus on physical body and shape, and use of racial insults and slurs.

A rule like this one not only discourages female tennis players from having children at a young age, but it also makes it difficult for the women to return to the sport after childbirth. Returning to work with a toddler at home rings difficult for any woman. But expectations to do so and play tennis at the same level as before pregnancy are impractical.

Following what is expected from the heterosexual female persona holds an unfair trap. It alludes to the idea that childbirth changes a woman’s athletic ability, and essentially, that motherhood and athleticism can’t realistically coexist.

“You shouldn’t have to stop altogether just because you want to have a baby young,” Williams said in an interview with The New York Times. “So I think as a women you should have that choice to get pregnant and have a baby and still be able to have a career just like in any other job.”

Furthermore, a woman in sports must also have credibility proving she fits the heterosexual female persona. By adhering to hegemonic feminine ideals — having boyfriends, husbands or children — female athletes receive more sexualized media attention, fan approval and endorsements, as opposed to female athletes with a more masculine appearance.

But these small publicity “benefits” don’t last long in a female athlete’s career. Instead, the ideals limit female athletes to one path that compromises their careers.

The media depicts women as a symbol of inferiority in athletics, and it’s obvious that should no longer be the case. The idea that femininity is synonymous with weakness, while aggressiveness compromises the perception of a woman’s sexual orientation, has taken over the media. Meanwhile, this type of criticism of male athletes remains rare.

Even since the days of Benny “the Jet” Rodriguez, playing “like a girl” has been used to devalue the abilities of female athletes. It’s time we stop using these subtle, generalizing words in reference to female athletes, and start recognizing what “like a girl” can mean — skilled, calculated and powerful.