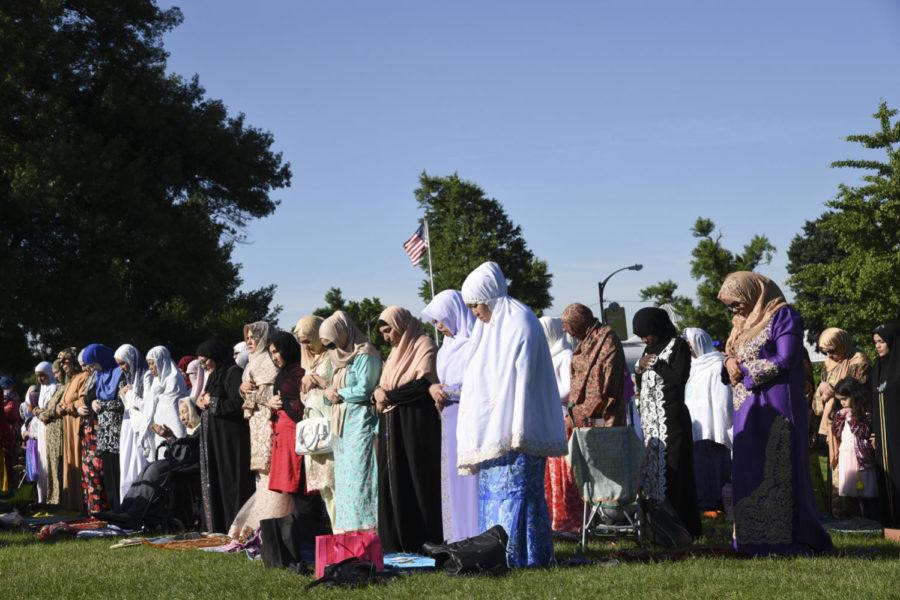 As the sun rose upon Schenley Park on Friday, the park filled with hundreds ready to pray and celebrate. Children played at the petting zoo and three colorful bounce houses, and got their faces painted while parents bought food from the surrounding food trucks to celebrate Eid al-Fitr — a holiday marking the end of the fasting of Ramadan.

Imam Naeem Abdullah is a Muslim leader similar to a priest or pastor from Masjid al-Mu’min, a mosque in Larimer, Pittsburgh. He sat on the ground before leading the second prayer of the day called “Eid al-Fitr,” or the “Celebration of the Fast Break.”

“Excited, joyous, festive — this is a time where families get together,” Abdullah said.

Ramadan is the ninth and holy month of the Islamic calendar, in which believers fast from dawn to dusk. Participating Muslims are prohibited from activities such as eating, drinking, smoking and sexual activity. If a Muslim is engaged in sports, on their menstrual cycle or sick, that person is permitted to eat during the fast.

At night, family and friends gather for a fast-breaking meal called iftar, which traditionally begins with the simple sugars found in dates. During the last 10 days of Ramadan, families try to stay the night at their mosque alongside their Islamic community.

Anyone was welcome to attend the event, but there were four primary mosques present — Masjid Mu’min, the Islamic Center of Pittsburgh, Amar Islamic Center from Wilkinsburg and Nura Zaman from the North Side.

During the celebration of Eid al-Fitr at Flagstaff Hill, there was a $12 donation box for Zakat al-Fitr, a traditional religious custom to help those in need. Historically, people would give food like grain — but now, money is acceptable as well.

“This will be given out today,” Abdullah said. “Most communities have a list of needy people in their community so we make sure it gets dispersed evenly between them.”

When people finish the month and complete their fast, there is a mixed reaction of happy to eat but sad to end. A common phrase at Eid celebrations is, “Eid mubarak,” or, “Have a blessed holiday.”

Haniza Yaacob-Ritz, 50, from Malaysia, said in the bright sunlight that during fasting, she understands what it is like to be without those necessities. It was a “brutal” month, but Yaacob-Ritz is happy to be able to eat and visit friends.

“As you see, everyone is gathering and after this we are going to visit Muslim friends and their open house and get together and eat,” Yaacob-Ritz said as she watched the children play on the bounce houses and get their faces painted.

Lana Shami, 51, from Mount Lebanon, who migrated from Syria at six years old, frequents ISCP and Attaweed to pray. Dressed in bright blue, she said that she missed Ramadan because of the sense of community that came with it.

“I can finally have my coffee after 30 days,” Shami said. “But it is a nice time for reflection and I’m hoping I come out being a better person than I was going into Ramadan.”

Her son, Omar Obeid ll, 11, likes Ramadan because he can see his friends. Shami says he insists on going to the mosque to pray so they can all hangout.

“They love the fact that they can stay up late at the mosque while we’re praying. Some of them pray with us, they have a rec room,” Shami said.

Shami never has broken Ramadan except for her menstrual cycle or sickness, which is allowed, but she said Muslims who do are very moderate in their eating.

“You should minimize, you shouldn’t flaunt that you’re eating and going crazy. You’re supposed to still be in the Ramadan mode of minimizing the luxuries and minimizing anything in excess,” Shami said.

Abdullah Aamir, a 25-year-old from Afghanistan, came to the United States to obtain a bachelor’s degree at Carnegie Mellon University and has been here for eight months. He prays at ICP and says there are two parts to Ramadan and Eid al-Fitr for him — spirituality and community.

“The spiritual part makes you really sad when those opportunities are just slipping between your fingers and you can’t really hold on to it anymore because it’s a very spiritual month, Ramadan,” Aamir said. “You do little but the reward is double, triple and quadruple, it’s really good. And the feeling inside is really good.”