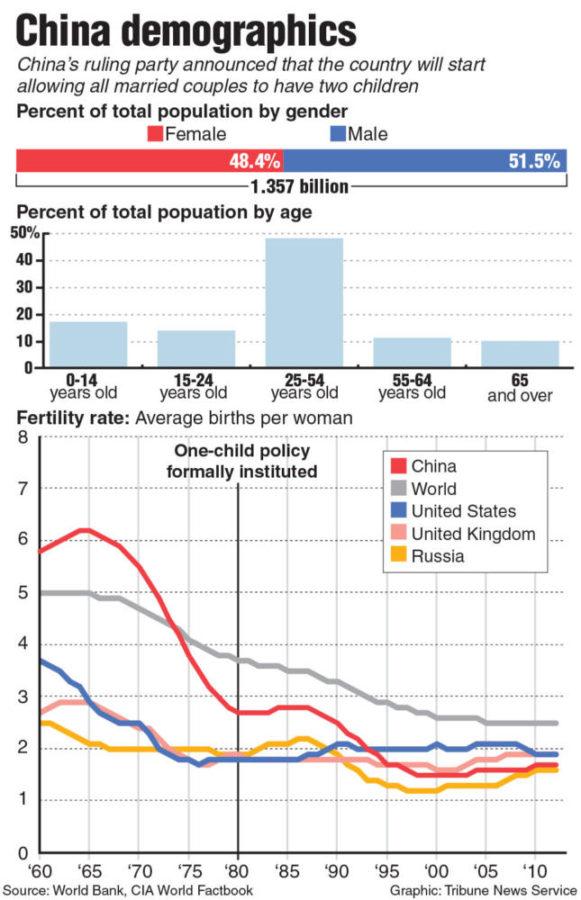 Demographics of China's population after the ruling party decided to end the one-child policy, allowing married couples to have 2 children, in 2016. (Graphic via Tribune News Service)

The small oval scar on the top of my left arm goes unnoticed by most. They have no reason to look, since the United States stopped administering the smallpox vaccination in 1972. Even I forget it’s there, until news from across the ocean reminds me that it’s the physical marker of China, a country that continued to administer the scarring vaccine, and the country whose one-child policy demanded my first home rejected me before I was born.

When China loosened the policy two years ago, allowing two children instead of one, I didn’t know how to feel. Happy for some progress, hurt that it came too late for so many women and children, including myself. And now that policy might be overturned altogether, allowing people to have as many children as they wish.

On the surface, it’s a good change, one that will help return bodily autonomy to women. But according to China’s State Council, the country is focusing on something more superficial — its image. In doing so, it ignores its own history since the policy’s implementation and stunts chances for improvements in the future.

The policy, implemented in 1979, came on the heels of The Great Famine of the late 1960s and early ’70s, in which up to 45 million people died from starvation. The Famine caused anxiety over resource scarcity, leading to a policy that restricted most families to one child and caused millions of forced abortions and sterilizations.

It also led to a now-infamous gender imbalance, as patriarchal Confucian values mixed with men’s ability to work and take care of their parents, causing men to outnumber women by at least 33 million. The imbalance is often used to prove the failure of the policy that was meant to reduce the population and avoid resource scarcity.

By some measures, it worked. The population growth slowed as fertility rates dropped, and some estimate that China avoided as many as 400 million births since the policy’s implementation.

But other countries in the region, such as Japan and South Korea, experienced similar decreases in birth rates without the one-child policy as they developed and their cultures shifted away from larger families. According to Forbes, declining fertility rates are a consistent marker of economic development. Since China has the fastest sustained expansion of any major economy in history, it may not have needed the one-child policy at all.

It’s difficult to know the number of women and children affected. The government never enforced the policy consistently, depending on the attitudes of local officials as well as a couple’s location, ethnic status and whether both parents were only children. It’s difficult to find comprehensive adoption statistics, and while some babies made their way through welfare centers to new families, others were killed or died of exposure when abandoned.

But China doesn’t want to talk about that. And I understand — it’s hard to admit mistakes, and the implicit recognition of the policy’s failings is a small success in itself. But in not fully recognizing the damage it’s done to its women, China continues to harm them.

In discussions of the policy and its changes, economics take center stage — the impact on China’s workforce, the shifting market for baby items, the strain on natural resources. They’re important aspects of the policy to consider. They’re also not the full narrative. But instead of taking a moment of reflection and self-criticism, China is concerned with its image.

While disappointing, this isn’t surprising. China’s concern with its image, particularly about the one-child policy, is nothing new. Its desire to appear just as good as or better than the West combined with a government that controls and restricts information has led to inflated statistics and dubious success stories.

As China expands its global influence, it needs a good image. But it also needs to recognize that its image problems go much further than policy.

The one-child policy has created lasting changes in how Chinese people view families and children. While there was a brief uptick in births, numbers have already dropped. Many people — particularly young adults, despite pressure from parents — don’t want more than one child, and plenty more don’t want children at all.

China’s government needs sustained attentiveness to its problems. Just as passing the Fifteenth Amendment in the United States did not ensure that black Americans could vote, erasing the one-child policy does not erase the damage it’s done and pain it’s caused.

It’s difficult to know where to begin. My first instinct is myself and others like me. Every adoptee has a different experience, but for many, and for me, abandonment is a process of pain and anger.

But I’m still alive, which is more than can be said for many female infants. Because women’s labor goes toward the family they marry into, rather than their own, poorer families preferred boys. Some of us were abandoned, but as many as 1 million girls were killed during the first years of the policy.

Plenty of others were never born, especially as technology developed to make sex-selective abortions possible. The government released a report in 2013 revealing 336 million abortions and 196 million sterilizations since the early 1970s, 17 million of which were forced. This attack on women’s bodies and psyches places their pain, along with those abandoned by their parents, as a means to an end.

But treating it as a cost that must be paid shows a disregard for women that goes deeper than concerns about image. There have been attempts to tackle manifestations of misogyny in China, from harassment on public transit to danger for women using ride sharing services.

But attempts at solutions — women-only metro cars and limiting women to only using female drivers at night — failed because the government, and much of Chinese society, don’t understand the problem. More than top-down solutions, women need equal respect for their bodies, for their labor, for themselves.

Perhaps China truly cares about its women. But citing its image as the primary reason to abandon the one-child policy, especially as it expands economically and tries to project that image across the world, doesn’t look good. If public perception is what’s pressuring China to change its policy, it’s best to remain wary of how much progress to truly expect.

Ending the one-child policy is a step in the right direction. But the Chinese government needs to recognize the harm it’s caused in the past, not just for the peace of mind of those affected, but also for the benefit of women in the future. I don’t expect an apology, and even if it gave one, these scars won’t fade. But right now, this is another bandage solution, and underneath, the scars still feel raw.