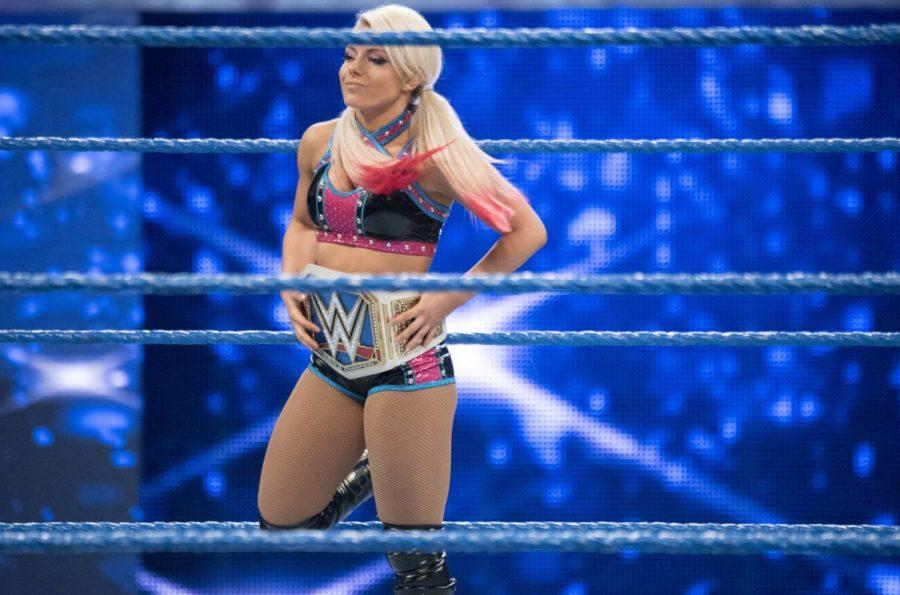 Alexa Bliss was a two-time RAW women’s champion before this year’s Money in the Bank competition. (Photo via Flickr)

This year, I spent my Father’s Day the way anybody who feels awkward during family gatherings should — drinking a beer and watching eight beautiful women beat each other up with ladders.

Though WWE’s 2018 Money in the Bank pay-per-view Sunday featured results I was in favor of, the show lacked the wow factor that pay-per-views should provide overall. Specifically, crossing the women’s Money in the Bank ladder match winner with the RAW women’s championship storyline so soon didn’t make sense and offered nothing to further the storylines for the RAW women’s division.

A Money in the Bank ladder match is not a traditional match won by pinning or submitting the opponent. A briefcase containing a contract for a world championship match is suspended above the ring, and the first participant to climb the ladder and retrieve the briefcase wins. The contract is then good for one calendar year starting the day the superstar wins it.

Usually, the MITB winner becomes a “breakout” star, having the briefcase win as one of, if not their first, big WWE accomplishment. Carmella, who won the inaugural women’s MITB match last June, used her win to gain major heel heat — negative feelings from the crowd about wrestlers who are “bad guys” — and elevate her brand from her previous manager position. In April, Carmella became the first woman to successfully cash in an MITB contract and became the Smackdown Women’s Champion, continuing her reign to date.

This year’s match included Charlotte Flair, Alexa Bliss, Sasha Banks, Natalya, Becky Lynch, Naomi, Lana and Ember Moon. The latter two are the only ones in the group to not hold a main-roster women’s title. Per MITB history, for both men and women, it would only make sense for Lana or Moon to win the briefcase.

But of course, not everything has to make sense in WWE.

In a match that showed tons of athleticism and storytelling from these eight women, there was no clear “winner” present from the beginning. Newcomer Moon hit Banks with a beautiful — but stiff — springboard moonsault onto a ladder in the center of the ring, and notable frenemies Flair and Lynch shared a hilarious back-and-forth debate of, “No, you put it down!” while holding onto the same ladder.

My personal favorite female superstar, Bliss, was already a two-time RAW women’s champion prior to MITB, and needed some time out of the title picture to give her character a bit of a soft reset after losing the title to Nia Jax at this year’s Wrestlemania. While I love watching her character throw temper tantrums when things don’t go her way — as well as cowering in fear when other opponents approach her — I knew she wasn’t going to win because it just didn’t make sense for her to.

I was excited to see Lynch finally getting her shining moment as she climbed the ladder to the briefcase with no one else in sight. But then Bliss snuck back into the ring, as she does, and dumped Lynch!

Bliss won the women’s MITB ladder match, defeating other crowd-favorite female superstars who could have used the win more.

Later, Nia Jax, the RAW women’s champion, and Ronda Rousey had a singles match for the title — which also seemed to be a strange booking decision given that this was Rousey’s first televised singles match in WWE. Things seemed to be going better than expected. Rousey’s Wrestlemania performance earlier this year in a tag-team bout cemented her as a fierce competitor, but fans weren’t sure how she would perform on her own — especially against Jax, who isn’t particularly known for putting on five-star matches.

Jax, the clear powerhouse of the match, beat Rousey like a ragdoll. Rousey was thrown into the barricade and on the receiving end of Jax’s Samoan drop, making the champ look really good. After teasing it for a long time, Rousey was able to lock in her signature armbar on Jax, making it seem like Rousey might actually win the title.

Then Bliss cracked Rousey in the back with her newly-won briefcase, causing Rousey to win by disqualification. Bliss, with the champion already beaten down, opportunistically cashed in the championship contract and became RAW women’s champion for the third time.

Don’t get me wrong — I love Alexa Bliss. She has a great character, fierce appearance and she rivals even Stone Cold Steve Austin on the mic. She knows how to work a crowd and is the best female heel that the WWE has today.

And that’s exactly why she doesn’t need a championship belt to be successful.

Bliss has been in either the Smackdown or RAW women’s title picture since being on the main roster beginning in July 2016 — which is unusual since she isn’t necessarily the best in the ring. The women’s MITB match should have been used to make a legitimate threat out of either an up-and-coming performer or a previous champ with an unsatisfying reign, like Banks, and not just a way to elongate the already-tired Jax versus Bliss feud.

Jax will get her rematch against Bliss Sunday, July 15, at the Extreme Rules pay-per-view hosted at PPG Paints Arena, live on the WWE Network starting at 7 p.m.