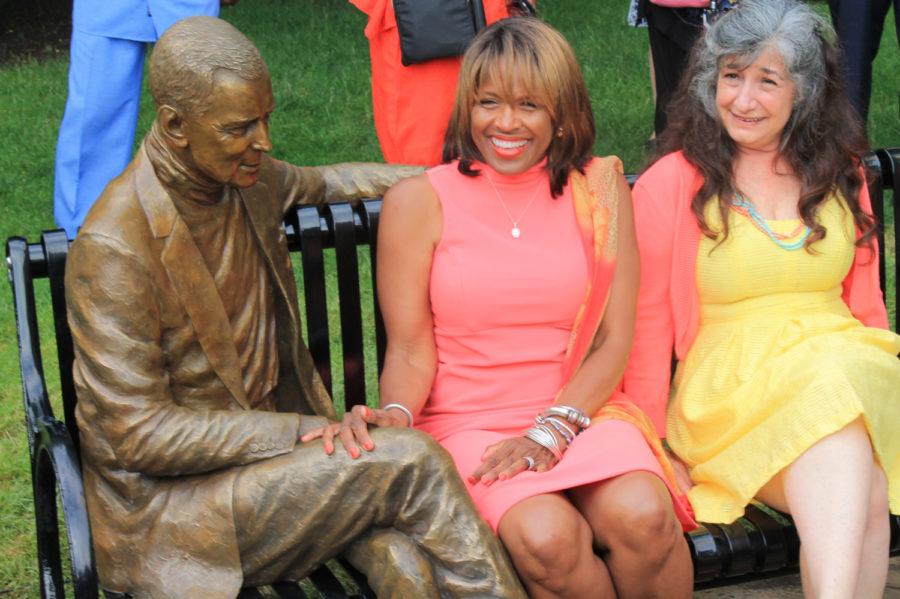 Joy Starzl sits next to the statue of her late husband, Dr. Thomas Starzl. Starzl was frequently considered the father of organ transplantation for a program he launched at Pitt in 1981. Susan Wagner, the sculptor, sits beside her. (Photo by Samuel Weber | Staff Writer)

Friends, family, university staff and members of the media gathered outside the Cathedral of Learning in full business attire Saturday to honor the memory of the late Dr. Thomas Starzl with a new bronze statue.

The memorial unveiled Saturday features a simple wooden bench with room for people to sit and relax. The life-size sculpture of Dr. Starzl sits on the far end of the bench with one arm over the back. Dressed in a turtleneck, jacket and slacks, the scientist sits with his legs crossed and a smile on his face, looking as if he is admiring the scenery or telling a story.

As the unveiling began, local religious officials blessed the sculpture, citing Dr. Starzl’s religious background as his motivation for what he worked towards throughout his life.

Chancellor Patrick Gallagher made the first speech following the statue’s unveiling, beginning by thanking the statue’s sculptor, Susan Wagner. Wagner is also known for making sculptures of Pittsburgh Pirates legends Roberto Clemente and Willie Stargell. Gallagher said that he knew Dr. Starzl would be happy with where he will be remembered, since he saw the campus as his personal sanctuary.

“When you get, you learn,” Gallagher said, quoting Maya Angelou. “But when you give, you teach.”

Gallagher recalled talking with Dr. Starzl around campus and seeing him lying on the grass or walking around the Cathedral “with a look of satisfaction.”

“He really loved being here and seeing the future in the students around Pittsburgh,” Gallagher said.

Allegheny County Executive Rich Fitzgerald shared some words in honor of Dr. Starzl after the Chancellor had finished. Fitzgerald met his wife through Dr. Starzl when she was studying as Starzl’s student.

Fitzgerald said Starzl’s humanity and humility left him at a loss for words the first time the two met. He and Dr. Starzl went on to become good friends over the years.

“I really think he belongs with the legends of our time,” Fitzgerald said. “He made such an impact in the world, all the while still being happy with enjoying the little things.”

Before unveiling the sculpture in his honor, Dr. Starzl’s widow, Joy Starzl, spoke. Choking back tears, she stumbled over her words while describing their time together. Starzl said her husband would have  jokingly told her to hurry up with what she was saying, garnering laughter from the crowd. She described how shortly before his death, Dr. Starzl he said he saw a crack in the ceiling of the hospital room he was in and wanted to open it.

“He pulled that crack open and was greeted by all this light and all these people clapping for him,” Mrs. Starzl said. “When you see this statue, it’ll be him telling that story all over again for everyone to hear.”

In attendance at the unveiling was Thomas Burke, Senior Management Consultant at Clear Thinking Group, age 63. Burke said that he wanted to see the unveiling because of the important role Dr. Starzl played in his life.

Burke was the first adult to successfully undergo a liver transplant conducted by Dr. Starzl on July 12, 1981. Starzl and his wife got married shortly after Burke’s procedure, so he was unable to leave the hospital until after their honeymoon.

“Today was pretty much a chance for me to see some people I hadn’t seen in a while,” Burke said. “I’ve known both Thomas and Joy for a long time, so it felt right to see him being honored.”