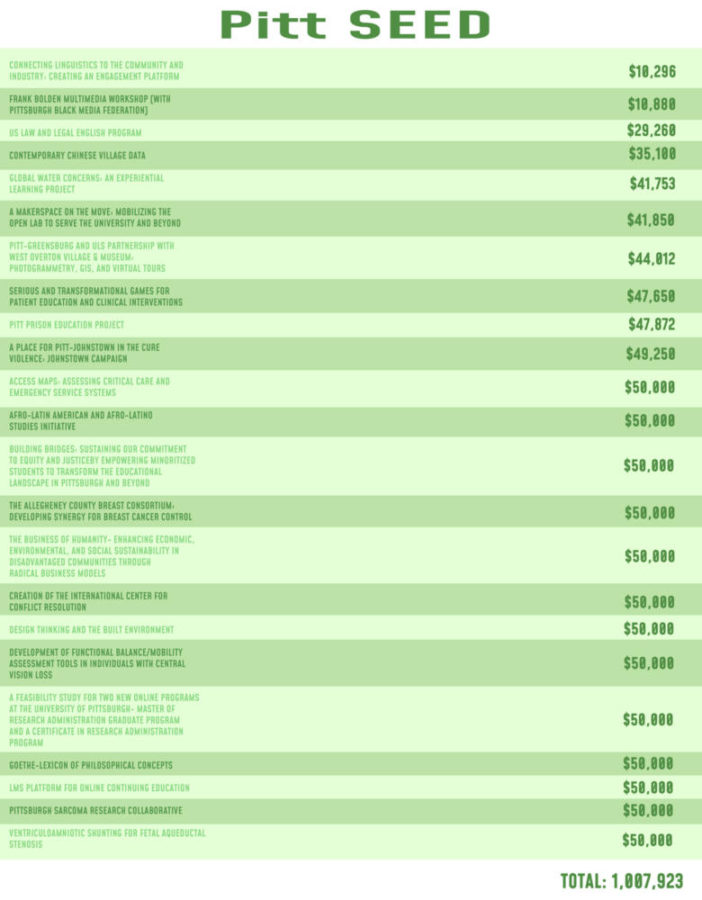 By Mario Cattabiani III | For the Pitt News

Pitt is investing in change this summer, beginning with projects from professors at the University. The first-ever Pitt Seed Project awarded a total of more than $1 million to 23 programs designed to play an instrumental role in transforming the University.

The grants will fund a wide range of faculty-proposed studies, community partnerships and workshops, ranging from efforts to treat birth defects, reduce inmate recidivism and advance research into better water use.

Pitt Chancellor Patrick Gallagher announced the grant program in January, and by the March deadline 171 faculty members had applied for funding. Those applicants were eventually cut to the final 23 announced recipients.

“We launched Pitt Seed to directly engage our university community members in enriching our mission and advancing the Plan for Pitt,” Gallagher said in an email. “The response from faculty and staff members has been overwhelming — and it underscores the idea that everyone can play a part in driving meaningful and powerful change at Pitt.”

Weiss said the Pitt Seed program will help Pitt establish itself as a leader in sarcoma research.

“The Pitt Seed grant will help us on our goal to make the University of Pittsburgh a destination center for excellence for sarcoma research and treatment,” Weiss said.

PSaRC is a multidisciplinary team of researchers and physicians which focuses on sarcomas — rare cancerous tumors that afflict both children and adults. Treatment strategies and resulting outcomes for adult and pediatric sarcoma patients have not changed in the last 30 years — making them especially dangerous.

Weiss’ $50,000 grant was more than the average grant amount of $43,822 across the 23 projects. A grant for $47,872 was awarded to the Pitt Prison Education Project, a program that teaches joint classes for inmates at the State Correctional Institution in Fayette County and Pitt students.

Dr. Chris Bonneau, an associate professor of political science, teaches in the program. The money, he said, will go toward training additional faculty, broadening the scope of the program and tutoring.

“The grant will also put us in a position to better reach our goal of a prison education center at Pitt,” Bonneau added.

Bonneau, along with other Pitt professors including Nancy Glazener, Dr. Cory Holding and Dr. Shalini Puri, took weekly trips from Oakland to the SCI Fayette maximum security prison during the 2017-18 school year. There, they taught classes with up to 16 inmates alongside 16 Pitt students who earned three credits for the class.

Bonneau said that having people of diverse backgrounds in one place creates a learning environment that both the professors and Pitt students have never been a part of before.

“[They are] learning with different students than they would ever encounter on Pitt’s campus,” he said. “This program is a transformative experience.”

Parker Forman, a rising senior studying political science and communication, said the class he took behind bars impacted him in ways he wasn’t expecting.

“I didn’t realize how many people were actually trapped because of their race, social status and, most importantly, their education level,” Forman said. “I think it’s important that the program received some grant money because it will only expand students awareness and knowledge of this issue.”

Puri, an English professor, is a core member of the Pitt Prison Education Project, and taught a literature course at SCI Fayette.

Students, she said, take the program seriously, even when it comes at the expense of their wallets.

“There was one student of mine that missed the carpool for a class, so she paid for an Uber all the way to the prison, which is over an hour drive,” Puri said.

A $41,735 grant was given to another program in which Pitt students will study at a Native American reservation to gain a better understanding of water conflicts and to reflect on indigenous peoples’ relationships with their physical environments and the ecosystems that shape their sacred worlds.

Dr. Nancy Condee, a professor of Slavic languages and literatures, and Dr. Zsuzsanna Magdo, the interim associate director of the Center for Russian and East European Studies, will head the project.

“[The program] fits really well within the initiatives that Pitt has with study abroad programs,” Magdo said.

Condee and Magdo said they were grateful for the grant not only for what it will do to help with their experiential learning projects, but also because it could help secure even more funding.

“This seed grant puts us in very good light with federal grant institutions, especially with how quick we were able to secure a grant from the school. It also allows us to build closer relations and enhance visibility of the project to these institutions,” Magdo said.