For the sixth year in a row, the Deutschtown Music Festival made noise through Pittsburgh’s North Side. This year, the festival took place over two days — beginning on Friday afternoon and continuing all day Saturday. 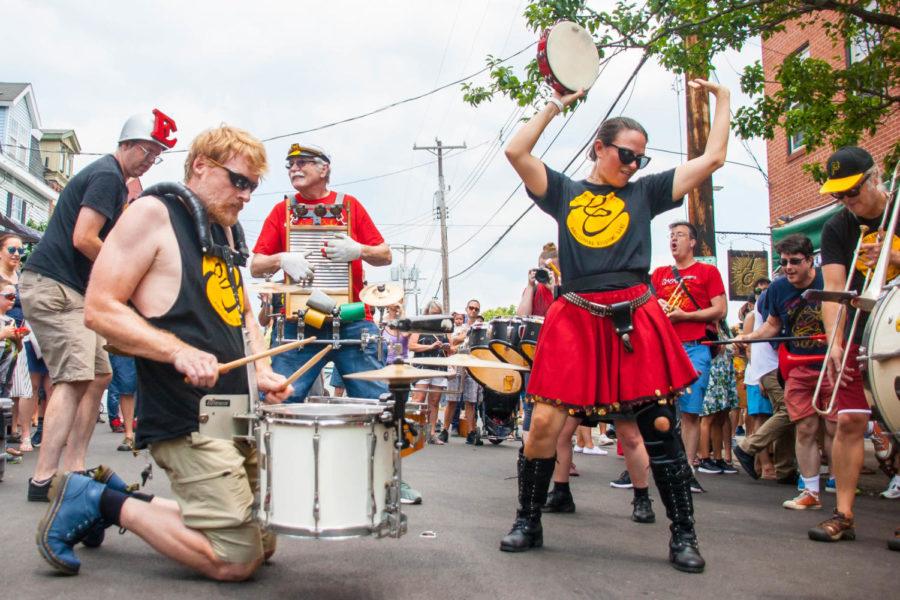 By Darren Campuzano and Sarah Connor

Pittsburgh’s annual Deutschtown Music Festival began Friday the 13th this year — but the fear of bad luck didn’t stop thousands of Pittsburghers from indulging in the tastes and sounds of the City’s largest summer rock-fest.

Instead of throwing salt over their shoulders, spectators were throwing salt on the rims of their favorite cocktail at the nearby Threadbare Cider House, while others were pumping their fists in the air to the beat of local performers such as teen singer-guitarist Elias Khouri, who played Friday on Foreland Street while backed by The EK Band.

“You know what they say — it’s Friday the 13th,” Khouri said right before kicking off his set full of hard rock covers. “And I’m pretty superstitious right now.”

And before anyone could say “black cat crossing,” Khouri and the band began the familiar opening riff to Stevie Wonder’s “Superstition.”

The free two-day Deutschtown Music Festival brought together dozens of local up-and-coming musicians from various genres and dispersed them throughout bars and restaurants across the North Side for intimate, live performances. Now in its sixth year, the event included close to 370 acts.

Jack Dusha, a 65-year-old Clarksville resident, planned to attend Deutschtown since October, and arrived right after the festival was set up. He stood at the foot of the Foreland Street stage, windmilling his cane to Khouri’s rendition of “I’d Love to Change the World” by Ten Years After and lip-synching to Santana’s “Black Magic Woman.”

“This is like holiday. I have never planned for a vacation this far in advance before in my life and I’m 65 years old,” Dusha said. “[It’s] a wonderful time — very, very friendly. I was here last year and never saw one incident of trouble.”

“It was kind of a South by Southwest-style festival. So, I went down to that and it was cool … I thought it would be great to do this on the North Side,” Soltesz said. “We started out really small with about 45 bands the first year — and every year we just keep getting bigger and bigger.”

Soltesz says he formed the first festival lineup by requesting bands he previously saw in concert. Now, bands are required to apply to play at Deutschtown and the festival’s band coordinator listens to each artist before deciding who makes it onto the final concert bill.

“This year we received over 560 band submissions,” Soltesz said. “Some of them from all over the place, but a lot of them are local, so they know what the deal is. We really try to fit everybody in.”

The easy-going, folk rock four-piece known as Jenny and the Jags was one of the bands included on the finalized schedule. The band tours across pubs in neighborhoods like Millvale and Squirrel Hill but played Friday afternoon at the Highmark/Allegheny Health Network Park stage, one of seven outdoor stages reserved for the Deutschtown festival.

Lead vocalist and rhythm guitarist Jenny Sines said the size of the event made it different from any other gig her band did in the past. She advised budding musicians to make some noise in order to get recognized.

“Just rock as hard as you can, man,” Sines said.

Along with her wisdom to go hard on stage, Sines encouraged local artists to sign up for the festival next year.

“Not only are you going to have an amazing time and meet some new fans and friends, but you’ll meet a lot of cool musicians, inventors and things, too,” she said.

While Jenny and the Jags tour as an indie rock band, another group that performed Friday — the Urban Impact jazz band — found The Deutschtown Music Festival to be a welcoming and safe setting to create an opportunity for musicians-in-training to play in front of an audience.

Made up of volunteers and young practicing musicians, this orchestra is part of the performing arts program of the Urban Impact Foundation. UIF is a faith-based non-profit providing athletic and performance opportunities along with school and career guidance to at-risk youth members of the North Side community.

“Urban missionary” and bassist Lorenze Jefferson serves as the mentor and bandleader to the students, who range in age from sixth graders to college-age young adults. Jefferson felt that Urban Impact stood out in a roster of more than 300 festival musicians because they are a “part of a bigger picture.”

“We’re just a piece of Urban Impact. The young people who come up here and play — they haven’t been playing for a long time, they’re really, really fresh in becoming artists or working out their craft,” Jefferson said “That’s probably the most unique [thing] about it — not a lot of experience but a lot of effort and dedication and practice.”

Youngstown State sophomore and music education major Ethan Barnard played trumpet alongside Jefferson. After going through UIF’s performing arts program, Barnard now volunteers and said the best part of playing with the band at performances like Deutschtown is seeing younger kids catch onto concepts in music.

“I’d say we’re one of the youngest groups here probably at the festival and I think we bring a lot of talent to the picture, even with our youth,” said Barnard. “I think there’s something to be said for young people just sharing their gift with anyone who’s willing to listen.”