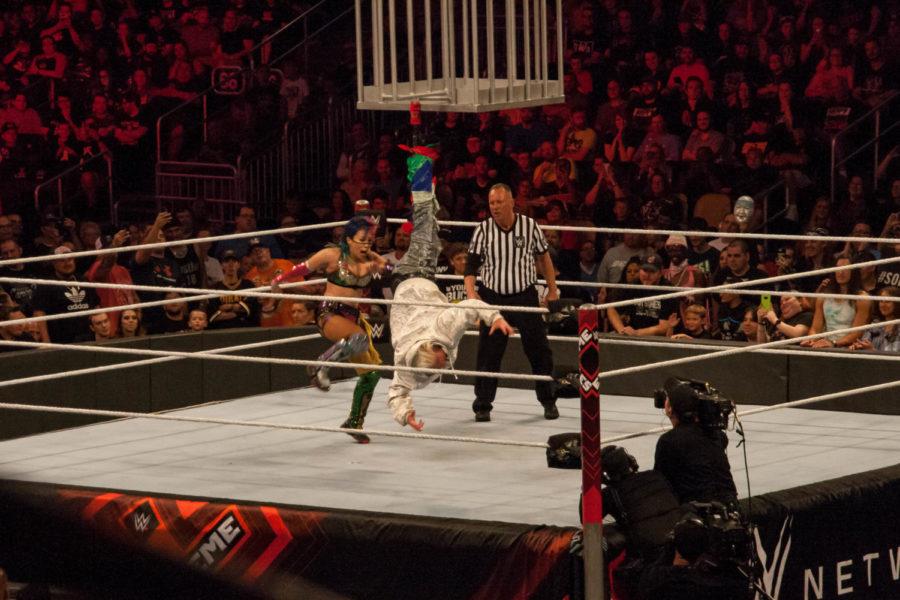 Asuka (left) takes the opportunity for revenge on James Ellsworth after his interference in a previous match.

As a bisexual woman, I enjoy activities that cater to both the straight and gay sides of my brain. That’s why I watch professional wrestling — there are both pretty ladies and men, and they punch each other in the faces in a soap-opera-like environment.

WWE hosted the Extreme Rules pay-per-view at PPG Paints Arena Sunday, and many fans — myself included — weren’t sure how it would go. With Universal Champion Brock Lesnar not even advertised for the show and the WWE Championship in a seemingly throw-away feud, the title outlooks for the show looked bleak.

At least, it was bleak for my childhood heroes Matt and Jeff Hardy, the former Team Xtreme.

After an upbringing full of replicating professional wrestling stunts and maneuvers in their backyard, the Hardy boys finally signed a WWE contract in 1998 as a tag team. Their aptitude for high-flying stunts and daredevil tactics earned them their team moniker — Team Xtreme.

The Hardys have had a myriad of breakups and makeups since, with each winning multiple tag and individual championships over the past 20 years. Even at a ripe 43- and 40-years-old, Matt and Jeff are still delivering consistently good work at a pace that is only slightly underwhelming when compared to their work when they were 20-somethings.

As someone who has been literally obsessed with these men since I started watching wrestling in 2008 — no, you don’t need to see my Tumblr feed full of Hardy Boys GIFs — I was in near tears at the opportunity to see Team Xtreme compete in my hometown once again.

Matt sported a new look, with an icy blond streak in his frizzy mane and a long sleeveless robe, which struck fans as unusual from his previous more laid-back look. He’s been stuck in a wonderful-on-paper but all-over-confusing tag team, called The Deleters of Worlds, with the equally weird Bray Wyatt since April. The pair was set to defend their RAW tag team championships against the team of Curtis Axel and Bo Dallas, dubbed the B-Team. No, that’s not a misprint; they are actually called that.

The rumor reports before the show declared it unlikely that any titles would change hands in Pittsburgh, but WWE seemingly decided to try to shock the crowd not once, but twice. First was by featuring the RAW tag team division, which has largely been neglected in WWE’s weekly programming, as the first match of the night. Second was allowing the Deleters of Worlds to drop the tag titles to the B-Team after Dallas hit Hardy with a neckbreaker off the top rope to get the pinfall.

Losing a championship is one thing, but being the one who gets pinned proves WWE’s writers aren’t trying to make performers look strong —  costing Matt his title in the process. Not the best day for him.

Fast forward to three matches later, and I’m hustling back to my seat after hearing Jeff’s entrance music as he walked down the ramp for his United States Championship defense. (I’m talking Olympic-level sprinting through the concourse of the arena just so I can see this man!)

Clad in a beautifully skin-tight black shirt with shiny black sleeves, his classic black cargo pants and black-and-white face paint, I fell in love with my childhood inspiration all over again.

His opponent Shinsuke Nakamura arrived to the ring with a cocky attitude, though really, he acts like that whether he is supposed to be the villain or not. When the referee’s back was turned, Nakamura took his chance, taking out Hardy’s legs before the match even began.

Though that would normally be a good tactic, especially if it led to winning a championship, this has been Nakamura’s angle for months — that guy who punches his opponents in the crotch. It’s getting old, and we saw it plenty during his feud with WWE Champion AJ Styles.

But WWE seems determined to make Nakamura, a world-renowned New Japan Pro Wrestling mega-star, look like a coward even when he is in a position of power. After Hardy stood up and the match actually started, Nakamura hit his finishing move — the Kinshasa — winning the U.S. title within seconds.

To make it even worse for Hardy, the now-former champ Randy Orton entered, surprising the crowd big time. Sadly, Orton did not deliver an “RKO outta nowhere,” but instead showed up just to stomp on Jeff’s junk — I think I might better understand why people make fun of professional wrestling now.

Regardless, the Hardys’ two title losses allow them to regroup into new feuds and even sets them up to reunite on either RAW or Smackdown in the future — but for people dubbed Team Xtreme, you’d think they would’ve been able to deliver more on a show called “Extreme Rules.”

WWE’s next PPV is SummerSlam, the biggest party of the summer, Sunday, August 19, in Brooklyn, New York, live on the WWE Network.