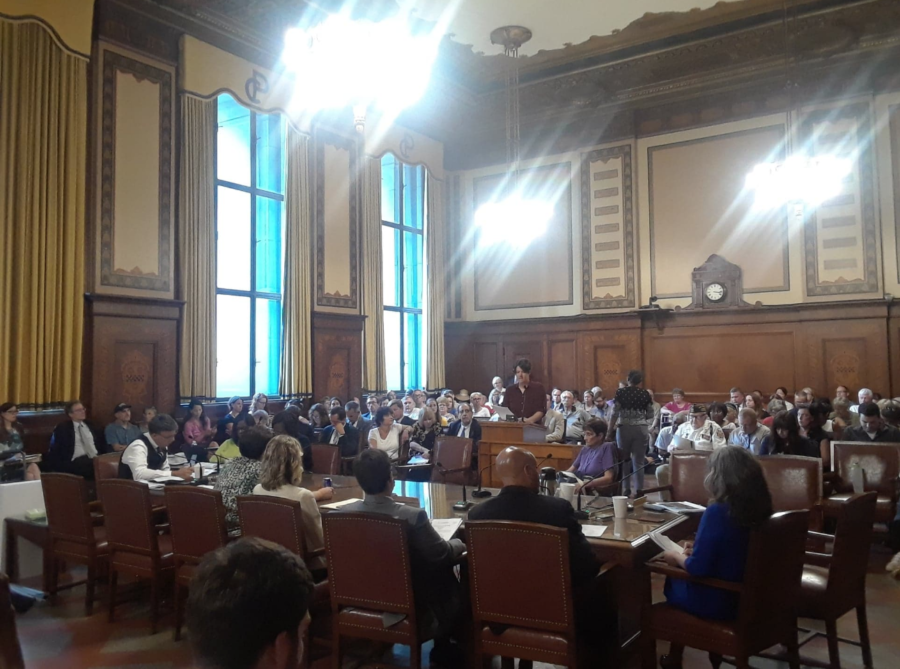 Over 150 people gathered at Pittsburgh City Council to voice their concerns surrounding UPMC Mercy's planned expansion, which comes as part of the hospital system's $2 billion plan to construct three new hospitals around the City.

Nurses, activists and local seniors packed themselves into Pittsburgh’s City Council chambers Tuesday afternoon to speak out against a controversial proposed expansion of UPMC Mercy in downtown Pittsburgh in an exhaustive four-hour hearing.

More than 150 people surrounded the seated council members and spilled into the atrium as they pleaded for the council to deny UPMC Mercy its proposed expansion until the health care giant agrees to enter a community benefits agreement with stakeholders.

Hospital Workers Rising, a project of SEIU Healthcare PA — the state’s largest union of nurses and health care workers —  organized the opposition to the expansion. City Council is set to vote on a resolution that would allow UPMC to amend its 2012 master plan to modify the use of their property. The modification would allow them to expand a parking lot and former NRG power plant next to UPMC Mercy into a new, 300,000-square-foot Vision Rehabilitation Center.

“This needs to be done from the bottom up, not the top down,” Lisa Frank, vice president of SEIU Healthcare PA, said of UPMC’s decision making process. “UPMC relates to its community the way a king would to his subjects.”

The Vision Rehabilitation Center is the first in UPMC’s planned $2 billion investment to build three new hospitals across the City. Dr. José-Alain Sahel, the current chair of UPMC’s Department of Ophthalmology would lead the center. He plans on experimenting with new technologies like artificial retinas and gene therapy, and spoke at the hearing to emphasize that the Vision Rehabilitation Center would need to be attached to UPMC Mercy.

“They need to be in the same building. We need access to [Mercy’s] facilities,” Sahel said.

UPMC Mercy President Michael Grace, a nun from the Sisters of Mercy Order and representatives from construction unions and business advocacy groups came out to support the expansion project as well. Local activist groups, health care workers, city officials and concerned citizens spoke against it.

“We’ll hold job fairs, community events and make sure the community has access to trade skills and apprenticeships,” Grace said.

But the vast majority of attendees is against UPMC’s expansion and wants the council to strike down the resolution.

“We need an agreement. Before UPMC spends one dime on specialty services for high-income patients, they need to take care of [low-income] people and the more than 50,000 seniors in Allegheny County,” Erin Ninehouser of the Pennsylvania Health Access Network said.

Demands from the speakers included access to health care for all Pittsburgh residents regardless of their insurance carrier, more primary care facilities in low-income areas and for living wages and unfettered access to unions for all its employees.

District 34 Democratic Nominee Summer Lee cited the $16 billion health care giant’s 2009 closure of its Braddock hospital as evidence for why UPMC needs to be bound by an agreement.

“I come from a low-income community with limited access to transportation,” Lee said. “UPMC abandoned our community for a more affluent one.”

She also refuted arguments that the business advocacy group Uptown Partners and various construction unions made that the Vision Rehabilitation Center would be a catalyst for economic growth.

Tim Owens, an ex-marine and World War II veteran in his 90s, came out in full uniform to advocate that UPMC recognize all Pittsburghers’ insurance. Owens lost his International Union of Engineers insurance last year during UPMC’s separation with Highmark.

“We, the City of Pittsburgh, should not be taking the brunt of this fight between two companies!” Owens said to a standing ovation from the crowd.

He advocated for an expanded health care union, telling the story of a nurse’s aide who assisted him after an operation last year who didn’t make enough to feed her family without food stamps.

Dr. Sarah Goodkind, a faculty member at Pitt’s School of Social Work, cited her research in favor of living wages for hospital employees as well.

“I worked on a study on hospital workers living on low wages,” Goodkind said. “Too many of them live paycheck to paycheck.”

“UPMC’s expansion cannot continue to be at the expense of hardworking Pittsburghers,” Wagner said. “They have an expectation of unchecked growth, beholden to no one.”

Representatives of the Sierra Club, Pittsburgh United, the Pennsylvania Health Access Network and the Pennsylvania Alliance of Retired Americans spoke out in favor of a community benefits agreement as well. Eva Resnick-Day of the Sierra Club said that UPMC, as one of the largest energy buyers in the City, has an obligation to invest in wind energy as part of an agreement.

“Air pollution is a silent killer in Pittsburgh, and black children are six times more likely to die from bad air,” Resnick-Day said. “And fracking wells are not helping that. We need to take kids out of recurring hospital trips and put them back in our schools.”

After the meeting, Councilmembers Bruce Kraus and Darlene Harris said they would vote “no” to the resolution without a community benefits agreement. Councilmembers Anthony Coghill and Deb Gross remain undecided.

Council will vote on the proposal, but a date has not been set for the vote.