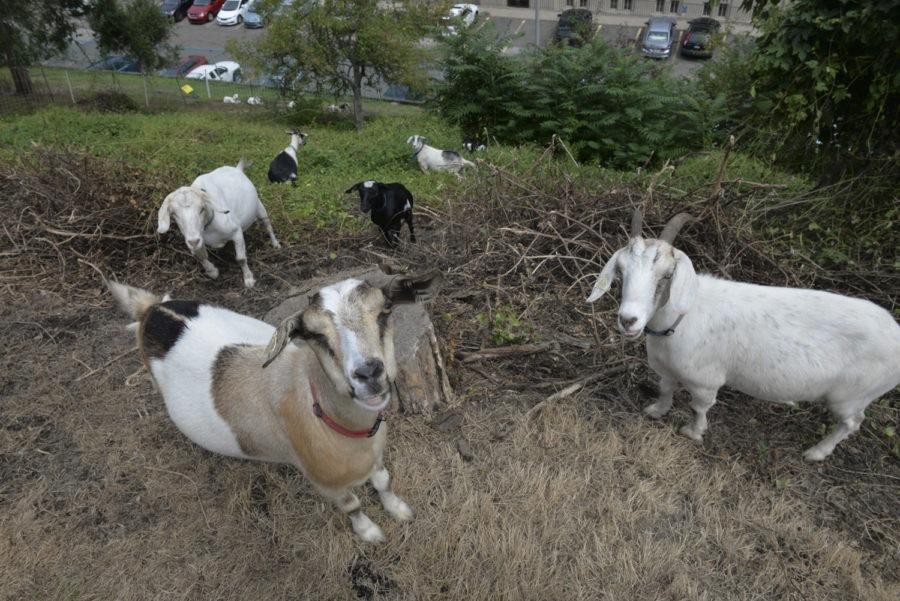 The goats frequently take breaks from eating to lie down and watch passersby. (Photo by Jon Kunitsky | Staff Photographer)

Check out The Pitt News’ photo gallery of the professional munchers from Have U Herd here.

When it comes to battling overgrown plants, thorny bushes and poison ivy, Pitt’s latest hires for its groundskeeping staff aren’t sheepish about digging in and getting their hooves dirty.

For several weeks this summer, the University employed 12 goats to clear weeds and invasive plants from areas behind Eberly Hall and the Fitzgerald Field House. This was Pitt’s first foray into using goats to maintain several lawns around campus. While it seems like only one small step in the ambitious Pitt Sustainability Plan, it has had a big effect and shows that the University is serious about reaching its sustainability goals.

Pitt’s Facilities Management Division hired the goats from Have U Herd, a “goatscaping” company based in Collier Township that offers lawn care services, goat rentals and goat yoga classes. About a third of owner Rainy Laux’s herd roamed Pitt’s green spaces, chewing through unwanted vegetation. According to the University Times, senior manager for grounds Andy Moran said the total cost of hiring the goats for four weeks was $4,000. 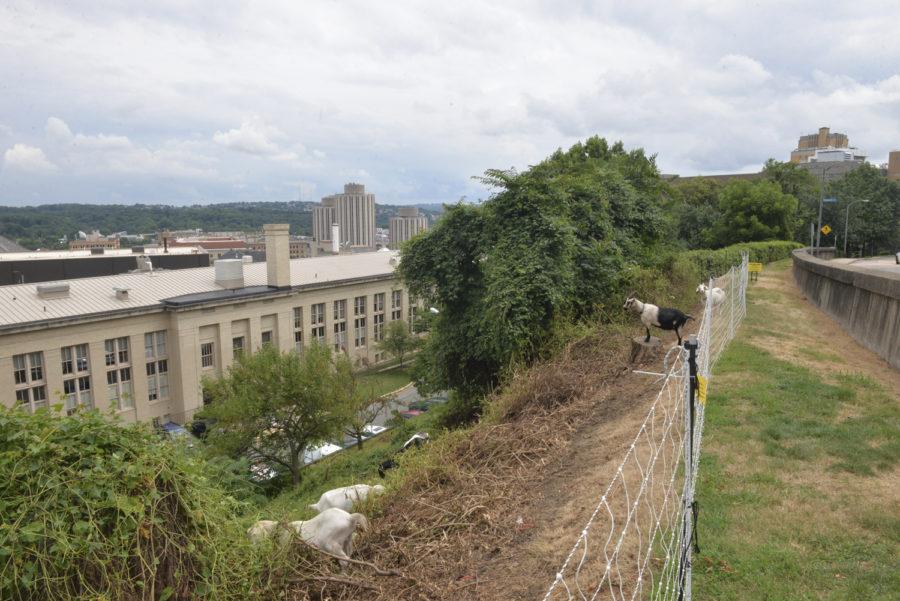 Using a dozen goats as landscapers may seem a quirky yet minor part of Pitt’s Sustainability Plan, the main goal of which is to achieve “the target of 50% reductions in energy use, water use, and transportation emissions by the year 2030.” Already Pitt has launched major efforts to reach this end, including projects such as the Carrillo Street Steam Plant, which is one of the cleanest university heating plants in the country and the Real Food Challenge, which states that by 2020, Market Central will serve 20 percent “real food,” meaning food that is locally sourced, fair-trade certified, ecological and humane.

Employing goats to tend to various lawns fits into a docket of impressive projects, like the Real Food Challenge, in that it demonstrates the positive impact one small, creative activity can have on the environment. That one small activity can come from any aspect of daily life on campus — and Pitt should continue in this direction.

Outdoor projects, such as landscaping, typically involve people, machines and chemicals to rid areas on campus of weeds and overgrown plants, but the negative effects of all of these methods were either reduced or completely eliminated with the alternative use of goats.

Moran estimated the goats could save approximately 160 hours of work and 20 gallons of fuel that groundskeepers would use to do the same work. And while some may argue that hiring goats takes wages from humans, these animals are just freeing up groundskeeping to do other projects, for which they will still be paid. The only outside energy the herd required was power for the electric fence that confined them to certain areas — and that energy was generated by solar panels. 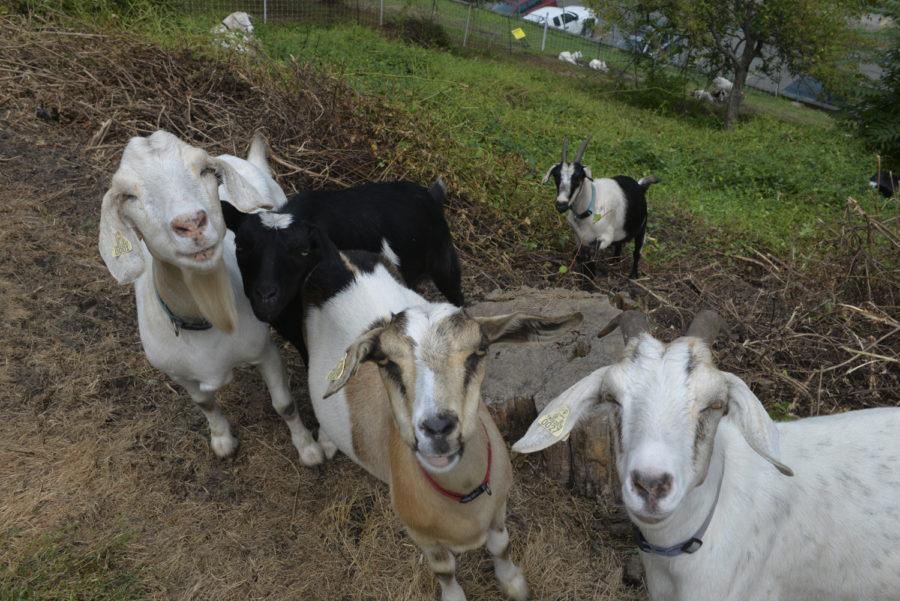 As an added bonus, Pitt will continue to reap benefits from these goats after they’ve stopped munching — it will be able to use their pellets as fertilizer, allowing the quality of the soil to improve. The goats’ work helps cycle plant nutrients in the soil. By getting rid of invasive species that suck away important nutrients, the soil becomes healthier for native species.

Pitt isn’t the first institution in the area to use goatscaping as a smart way to take care of unwanted vegetation. Last fall, Carnegie Mellon University utilized goats to clean up steep slopes overgrown with kudzu vines that would have been a laborious and less ecologically-friendly task for humans to clear. Pittsburgh’s City Council approved a five-year deal in March 2018 with the nonprofit Allegheny Goatscaping to clean up parks and other green spaces owned by the City.

Both the City of Pittsburgh and these two universities are showing that they are conscious of their duty to the environment. Although the business of goatscaping may seem a footnote to Pitt’s many larger sustainability projects, in reality it’s a sign that the University is leaving no stone unturned.

No matter seems to be too small to be overlooked as a candidate for innovation and improvement. If this is the kind of creativity that will accompany Pitt’s approach to sustainability in the future, it will be exciting to see what projects — large or small — follow.