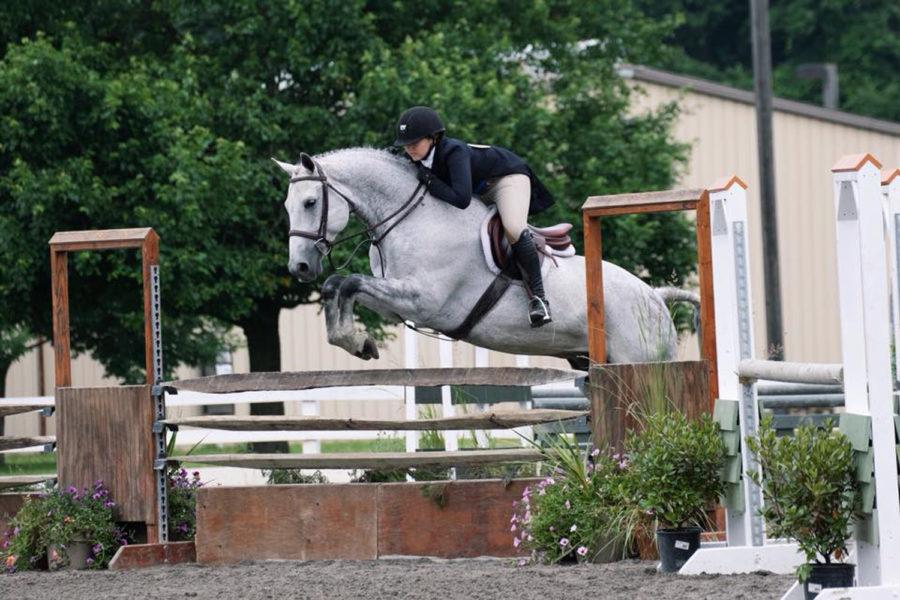 For a one-hour weekly practice, traveling 30 minutes from Oakland to a farm in Allison Park is a large commitment for anyone, especially for students who may not have easy access to cars. But those who belong to Pitt’s Equestrian Club know their sport isn’t just about the rider’s abilities and how often they are able to practice — it relies heavily on the horse’s as well.

Equestrian is a general term for all types of horseback riding, whether it be jumping over obstacles or simply showing. The Pitt Equestrian Club holds its weekly practices at Bargee Farms — an estate covering 165 acres of land that provides training facilities, derby fields and pastures — where the riders rotate among seven practice horses provided by the farm.

This system teaches the riders to be flexible and accommodating to the horses while practicing and preparing for future competitions — the team attends about 10 Intercollegiate Horse Show Association shows and regional and national competitions if they qualify that year.  Pitt’s club focuses on Equitation, a discipline of equestrianism in the English style where riders are judged on form, style and ability as horseback riders.

But before they can get on their horses, the riders must first travel a distance by car. Senior psychology student Lily Mosley says the limited number of drivers makes it tough to get there and back every week. That, in addition to the preparation and cleanup, leaves the riders with no time to waste.

“We get there with like a half an hour so that we have time to groom the horse and get them saddled and ready for our lesson,” Mosley said. “Afterwards, we have to wait half an hour or more to cool the horse down.”

On top of limited lessons and long travel time, riders need to prepare to work with a different horse at every show and even some lessons. Riders are randomly assigned horses because it’s too challenging to transport each thousand pound animal from the farm, through the city and to the competition site.

“You have to be on the same wavelength — if they try to get away with something you have to be firm and correct them, but then you can’t be pulling on their mouth the whole time or really fighting with them,” Mosley said. “It’s the attitudes and personalities that have to match.”

Without being able to communicate verbally with the horses, the riders depend on the horses’ personal style and mood, giving clear signals about what needs to be done in response. According to Mosley, because the bond between a horse and its rider is the most important aspect of horseback riding, riders must learn patience with the many horses they encounter.

With rotating horses during lessons, riders practice basic reigning and communication skills they will eventually use in competition. Having a horse of her own, senior biology student Micah Lisi is used to knowing every detail of her horse, but when it comes to riding at school it’s different.

“You have to be mentally flexible to understand your horse’s personality that day and be open-minded,” Lisi said. “If you become impatient, horses can feel that and they’ll know you’re nervous or impatient and they feed off of it, and it keeps growing.”

With about 30 members on the team, the riders are split into groups of four or five and spread out across lesson slots throughout the week. When the riders arrive for their lesson, they receive a list of the available horses for that day — sometimes the horses are assigned by the coach and other times, the riders get to pick. After getting the horses cleaned up and the saddles prepared, the riders and their partners are ready for the lesson.

Throughout the duration of the practice, head coach and Bargee Farms trainer Jim Boyce gives advice to the riders to help them improve, according to Lisi. The lesson process seems easy enough to remember, but the riders must keep in mind that what they learn must later be applied to the random horse they are assigned in competition.

“Nothing’s as good as being on the horse,” Lisi said. “There’s a disadvantage there where you’re only riding once a week, so with all of that muscle memory you don’t use unless you’re on a horse, it’s hard.”

At competitions, riders compete in different classes depending on their riding skills and experience. The highest level is the open class, and riders that compete at this level are either trained extensively in jumping fences in Open Over Fence or trained in walking and trotting in Open Flat.

Upon arrival at a show, the team is given an order of who is riding and when, as well as the competitors in their respective classes. The riders, including senior psychology student Ellen Stewart, look for their name next to a brief description of the random horse they will be riding that day.

“There’s a captain and coaches meeting, and after that, there’s usually the draw, which is when the horses are picked at random for each division,” Stewart said. “We get [the rider] on the horse, and they aren’t allowed to do anything on the horse before they go on.”

Unlike the standard show process, where riders get a practice run and adjustment of the saddle, the shows the Pitt equestrian team competes in are a bit different.

With the Intercollegiate Horse Show Association, the rider, dressed in breeches, a jacket, a show-shirt, helmet, gloves and black tall boots, is given merely 30 seconds to figure how to best work with the horse assigned to them and then only one opportunity to attempt to perform based on the skills they already know.

“Basically, you have to watch other people ride that horse to see how they behave,” Lisi said. “It’s just sort of luck of the draw — sometimes you get the best horse there and sometimes you get the one that is being so bad that later on in the day it gets pulled out of the show and isn’t allowed to compete anymore.”

And sometimes, the rider just needs luck on their side to help understand how a horse may feel on a particular day.

“Maybe the horse is having a bad day because it had a lot of beginner riders and got frustrated, or maybe it’s having a great day and you’re about to have an easy ride,” Lisi said. “There’s some that are super lazy or super crazy.”

Through their practices and shows, Stewart, Lisi and Mosley all understand that they may not always be in control. Blame can be placed on any aspects of riding, whether it’s not following through on a move or carrying out improper positions. But when sitting on top of a living animal which can decide how to react on its own, the rider must be flexible enough to compensate for the both of them.

“The discipline that we ride in is equitation, which generally focuses only on the rider — it doesn’t really focus on the horse — so you have to show your ability as a rider,” Stewart said. “Some of the horses aren’t that helpful in helping you look good, so it’s a test of our skills.”