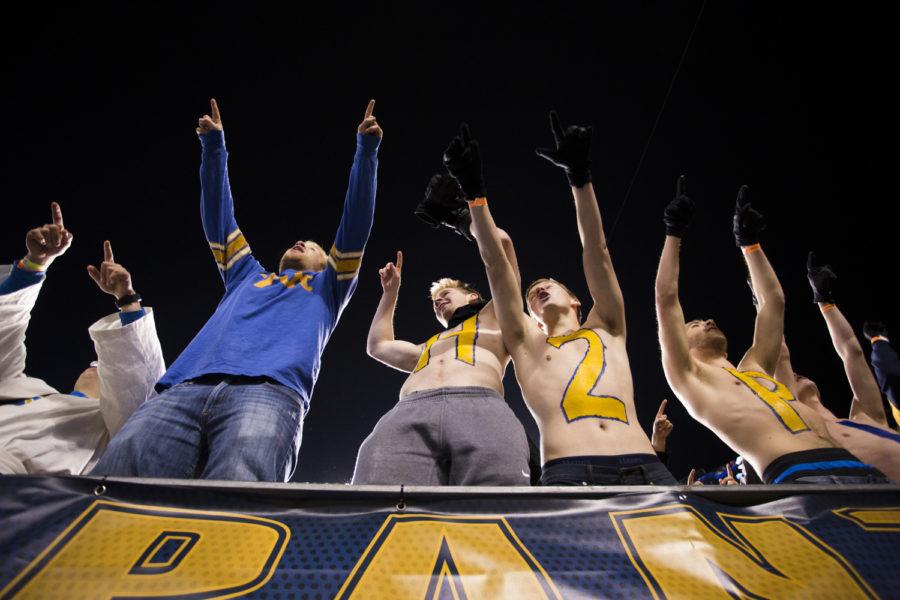 Panther Pitt fans cheer for the team at a home game against UNC in November 2017. (TPN file photo)

The 2017 Pitt football season was one marred by inconsistency and underachievement, with the team getting blown out in three of its first four games en route to a 5-7 finish and ultimately failing to reach a bowl game for the first time since 2007.

But despite the unsuccessful season, the Panthers flashed signs of potential and improvement, winning three of their last five games — including a signature upset over No. 2 Miami in the season finale.

“Once we’re all together, there shouldn’t be anyone we can lose to,” Bookser said. “As we’ve proven over the last few years, when we really want to succeed and we’re 100 percent bought into each other and to the game plan, we can beat just about anyone in the country.”

Head coach Pat Narduzzi, now entering his fourth year at Pitt, also spoke about improving from occasional ACC disruptor to consistent contender within the conference. In his three years leading the Panthers, Narduzzi’s record stands at 21-17 overall and 14-10 in the ACC.

“Any time you can beat two of the best teams in the conference in back-to-back years, it lets our kids know that if you pay attention to details, you can do it every week,” Narduzzi said at media day. “They’re buying in, believing in what we’re talking about, and that’s how you win football games.”

And with the toughest non-conference schedule in the nation according to ESPN, the Panthers won’t have any breaks in the season. Road trips to Notre Dame and Central Florida — as well as a home matchup against Penn State — constitute the team’s daunting slate of non-ACC competition. Pitt figures to be the underdog versus all three of those oft-ranked teams.

But if experience is any indicator of success, the Panthers should be in good hands — they bring back a large group of 18 seniors, seven more than last year’s team.

Despite the bevy of returning talent, all eyes will be on sophomore quarterback Kenny Pickett to keep the team’s underdog magic alive as Pitt looks to get back in bowl contention.

Pickett, whom the team intended to redshirt his first year, was thrust into the starting quarterback job late last season after injuries and underachievement by the two quarterbacks ahead of him on the depth chart, senior Max Browne and sophomore Ben DiNucci. When his opportunity to lead the team finally came Pickett made the most of it, throwing for 193 yards and one touchdown while rushing for 90 yards and two touchdowns in the season finale victory over Miami.

“You would think that Kenny’s been in Oakland for four years, the way he walks around campus, the way he acts, the way he presents himself, the way he goes about his work … the guy is a pro,” Bookser said. “He knows that he’s taken the reins and this is his offense.”

Pickett will not have to be the sole offensive leader, however — Pitt’s experienced backfield will help shoulder that burden. The Panthers bring back their two leading rushers in seniors Darrin Hall and Qadree Ollison, who combined to rush for 1,026 yards and 14 touchdowns last season, as well as senior fullback George Aston, who scored 10 touchdowns in 2016 before missing most of last season due to a foot injury.

The receiving corps remains one of the Panthers’ biggest question marks, with two of the team’s top receivers in 2017 — Jester Weah and Quadree Henderson — off to the NFL. Redshirt senior Rafael Araujo-Lopes, who led the team in receptions last season, will slot in as Pickett’s go-to option, while 6-foot-4 junior Aaron Matthews and true freshman Shocky Jacques-Louis should be next in line for targets.

It’s no secret that Pitt struggled on defense last year — the Panthers allowed 396.6 yards per game, good for fourth-worst in the ACC. But with nine starters returning for 2018, the unit often considered to be Pitt’s weak point is shaping up to be its strong suit.

“There’s a lot of depth [and] not a lot of drop-off, which is a great thing to see for that defense,” said redshirt senior linebacker Oluwaseun Idowu. “I’m really looking forward to what the defense is going to look like this season.”

It starts with Idowu — the former walk-on turned second-team All-ACC selection — anchoring the defense. He did it all for the Panthers last year, leading the team with 94 tackles, 11.5 tackles for loss and five sacks.

Idowu will have an experienced group of talent around him as well, with fifth-year senior linebacker Quintin Wirginis returning in the middle as well as two other starters — redshirt junior Saleem Brightwell and redshirt senior Elijah Zeise — returning at outside linebacker.

The defensive line also brings back virtually all of its production from 2017, including fifth-year seniors Dewayne Hendrix, Shane Roy, James Folston and redshirt sophomore defensive end Rashad Weaver. Many have Weaver pegged as a rising star after leading his position group in tackles, tackles for loss and sacks last season.

If there’s one area where the defense may struggle, it’s the defensive backfield. Stopping the pass has proven to be problematic time and time again for the Panthers, and last year was no different. Even with NFL selections Jordan Whitehead and Avonte Maddox, Pitt still allowed 254.2 passing yards per game last season — second-worst in the ACC. This season, it’ll be up to returning junior starters Damar Hamlin and Dane Jackson to provide consistency.

As it stands now, the Panthers are projected to finish fifth out of seven teams in the ACC Coastal division, according to an ACC preseason media poll released July 23. Pitt received no first place votes, while Miami, Virginia Tech, Georgia Tech and Duke finished ahead in the voting.

But with a rigorous non-conference schedule to raise the level of competition, a plethora of starters coming back on both sides of the ball and a large core of senior leadership, it is entirely possible that Pitt outperforms its predicted ranking. While usurping divisional foes Miami and Virginia Tech may be a longshot, expect the Panthers to knock off either Georgia Tech or Duke for a top-four spot in the division.

The Panthers’ official training camp will run from Aug. 2 until the beginning of the regular season, set for Saturday, Sept. 1, at home versus Albany.