She started in San Francisco on June 14. She arrived in New York City after running 4,000 miles with her team on August 4. 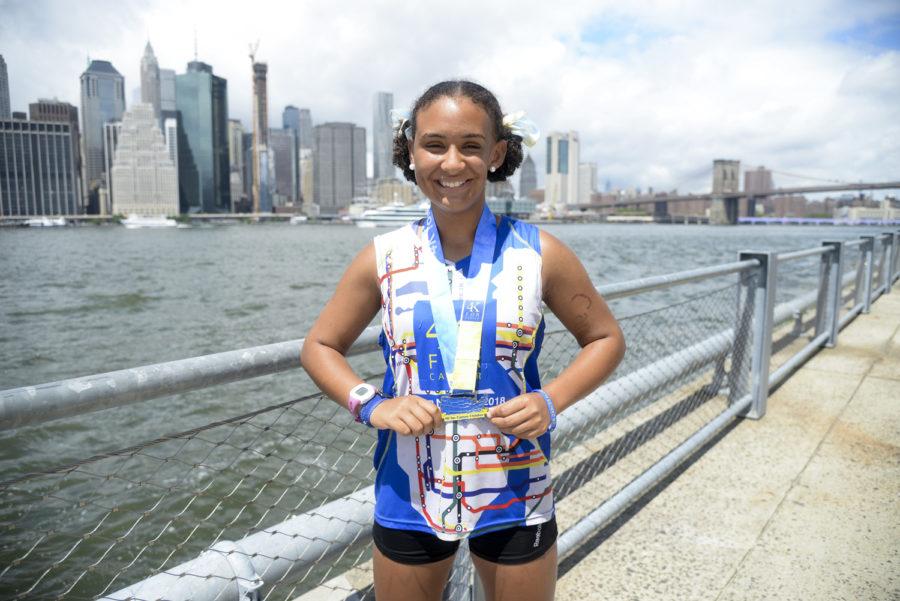 Monica Henderson poses with her medal that reads “4k for cancer finisher” after finishing her 4,000-mile run on Pier 2 in Brooklyn. (Photo by Anna Bongardino | Visual Editor)

This is part two of a two-part series. Read the first story here.

Monica Henderson has always been a fighter.

After a summer of battling IT band syndrome in her right leg and bursitis in her right hip, Henderson fought to finish the last 20 miles of a coast-to-coast 4,000-mile marathon on the morning of Aug. 4. She and 25 other runners — who ran with the Ulman Cancer Fund for Young Adults through their 4K for Cancer program — crossed the finish line in the rain in Brooklyn, New York.

“I couldn’t physically run for about two and a half weeks, I was more doing a hobbley run-slash-walk. But I was still determined,” Henderson said. “I’m on this journey, I’m going to do it, I’m going to run for cancer patients, I came here to run, I’m not going to sit out.”

The 4K for Cancer program is an annual trip organized by the Ulman Cancer Fund for Young Adults — an organization that aims to raise funds and awareness for the unique needs of young adults affected by cancer. From late June to early August, three teams run over 4,000 miles from the West Coast to the East Coast — up to 16 miles a day in two-mile increments.

Though many of her teammates don’t have a personal connection to cancer, Henderson does. The now 19-year-old rising sophomore survived rhabdomyosarcoma — a rare, aggressive soft-tissue sarcoma — at age two. After her mother and two aunts were diagnosed with breast cancer, Henderson was motivated to make a difference.

“I didn’t like to think that anything had changed,” Henderson told The Pitt News in April. “I wanted to do so much more than I could.”

After seeing an online advertisement for the 4K for Cancer program in the spring of 2017, she decided to apply on a whim in September and was accepted to the program a month later as a part of Team New York.

From the start of the race June 17, runners had opportunities to visit patients and their families in hospitals across the nation, bringing them meals, leading activities and providing company and comfort. Along the way, Henderson and her team ran through historic landmarks including the Golden Gate Bridge, Lassen Volcanic National Park, Rocky Mountain National Park and Niagara Falls. She finished her journey by crossing the Brooklyn Bridge on Aug. 4.

“People would always say, ‘you’re an inspiration,’ and I never really knew what that meant,” Henderson said. “Seeing how big of a difference we made to patients and people, that’s what really mattered. It’s humbling to hear you’re an inspiration, because you’re just one person.”

Throughout the summer, each member of the team ran with one partner, trading off every two miles with a different pair. But on the last day, the entire team ran the last 20 miles all at once.

The day started off with pouring rain as the team ran over the George Washington Bridge into Manhattan. Over the course of their trip, this was the first and last time they endured rain on a run. After almost 18 miles, the group met at City Hall in Lower Manhattan to regroup.

After arriving, they headed out for the final push across the Brooklyn Bridge, where more than 50 friends and family members of the runners gathered at the end of the second pier at Brooklyn Bridge Park, waiting with noisemakers, bells, homemade signs and banners.

Some runners held hands and cheered as they crossed the finish line. Others were visibly emotional — including Henderson.

“I feel like it’s almost not happening. I’ve waited 49 days, and day 49 just seems like it wasn’t going to come,” Henderson said. “Just the feeling of seeing everyone across the finish line and saying goodbye, it’s really hard, and I didn’t think the tears would come. But they’re honestly happy tears.”

Henderson went directly to her family — her twin sister, 10-year-old brother, parents, grandparents and many other family friends —  who were waiting for her close to the finish line. Though her parents, Carolyn and Stephen Henderson, hadn’t seen her for almost two months, they weren’t worried or anxious about Monica running across the country with injuries.

“We told her to slow down a little bit, she said, ‘No, I’m doing it,’” Carolyn Henderson said. “It’s life-changing. I think it’s going to be life-changing for her.”

Stephen Henderson said he couldn’t have been more proud of Monica for supporting a cause she feels deeply about.

“Even though she was in pain, she was like, ‘It’s an amazing experience,’ and it gave her a different perspective on life,” he said.

After a tearful reunion with family members and celebrating with team members, the runners held a small ceremony where they shared memories and admirations about some of their peers. Cheyenne Greenside, a recent graduate of University of Alaska Fairbanks, was Henderson’s running partner on the first day of the marathon.

“No matter what, injured, hurt, annoyed, tired, she’s always out there dancing and screaming and yelling your name,” Greenside said of Henderson at the ceremony.

Henderson fought through her injuries with positivity. Though she was in pain, she said she constantly reminded herself that even running half of what her teammates were running was an accomplishment.

“I feel like it’s a runner’s thing,” Henderson said. “You’re always in pain. But it’s okay … it means that you’re working hard.”

But her teammates weren’t the only thing motivating her. Every day, Henderson wrote the names of loved ones, friends and strangers on her body to remind her of her mission.

“When miles get rough and it’s 90 degrees, giving up isn’t a possibility, for I see these names that push me,” Henderson said in a Facebook post June 23. “I’m running in honor of all cancer warriors. They inspire me.”

She plans on giving herself a few days off to let her injuries rest. But after running 4,000 miles, Henderson said running for her will never be the same — for the better.

“I’ve rekindled my love for running. Before this trip it was a little harder to get going and out the door, but I don’t ever want to lose this high,” Henderson said. “I like to say this is a chapter in my book that’s ending, but it’s influencing the rest of the story.”