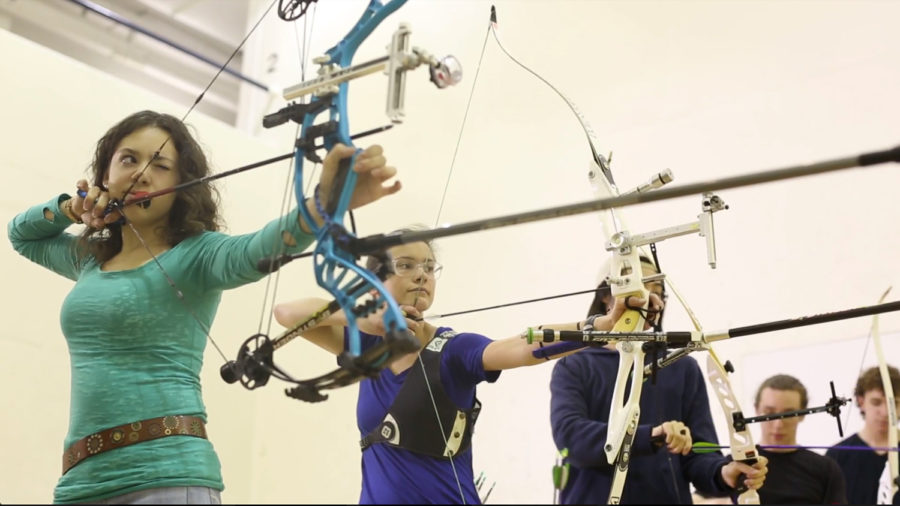 When Julia Lam arrived at Pitt as a first-year in 2016, the competitive archer sought out a club where she could hone her skills and meet new people. But to her disappointment, she found the University’s archery club had disbanded several years before when all of its members graduated.

“While there are other schools already with strong archery programs, I knew Pitt was the fit for me,” Lam said. “Creating my own club just seemed like the natural next step, and I started it with the intention of creating a solid collegiate archery program.”

Lam figured there were other people like her interested in archery on campus — she just had to seek them out. She joined forces with two other first-years in the same predicament — Anjna Nair and Kira Zack — and the trio set about rebuilding the Pitt Archery Club.

Now, Lam is a rising junior and the club’s president, while Nair and Zack are rising juniors and co-vice presidents. Over the course of two years, the three have built Pitt’s Archery Club to a competitive organization of more than 100 members consisting of a mix of experienced and inexperienced archers. Just last year, members competed at the U.S. Indoor National Championships and Outdoor Collegiate Nationals, and won All-Academic and All-American awards.

Lam, Nair and Zack were able to lure in new members through equipment they scored through a grant from USA Archery, which they used to buy bows, arrows, targets and arrow curtains. They were also able to set up practice at the racquetball courts in Trees Hall — they’re now looking to move some practices to the Cost Center in the future so they can increase their target distances.

The Archery Club practices two to three times a week, but has a flexible roster. Not every person on the team is asked to compete, especially since the club’s practices are only as intense as the archer chooses to make them. If a student displays an interest in archery, then the experienced members of the club teach them how to shoot. Lam encourages beginners to join, especially because for her the sport is calming and helps her find her balance in her daily life.

“This sport is fun and relaxing for me. It helps me find my center as you have to be calm and still to have a perfect shoot,” Nair said. “This sport is a stress-reliever for me.”

While some university club sports team can be very demanding, possess strict membership rules and dictate a lot of a student’s time, Pitt Archery does not. Students can come and go to practice as much as they would like.

In addition, athletes are not required to participate in competitive archery events in order to hold an executive board position. Brittany Pham, a junior majoring in molecular biology and the club’s social media manager, does not compete but still practices. Pham, like many other students, uses the club as a way to branch out socially and meet new people she otherwise would not have met.

“I really appreciate Pitt Archery. Even though it’s small as of right now, you know the names of every member and you know their daily lives as well,” Pham said. “Pitt Archery isn’t just about practicing archery but it’s a place to build interpersonal relationships.”

Even though she has yet to compete, she intends to do so at some point in the future. For this upcoming season she plans to improve her average scores in practice and work toward a competition.

“Students still want an outlet to go and improve without the whole ‘I’m bad’ mentality,” Pham said. “Of course we have tons of new archers but I never felt bad for missing a target.”

Some of the other team members are more serious than others, like Nair, a junior double majoring in molecular biology and biochemistry. At home she trains with a coach at a range not very far from her house, while at school she typically trains when she can.

“I train as often as I can when I have time. In college, I train at least two times a week with the rest of the club. On the days when I don’t go to the range, I ‘train’ with a stretch band to simulate pulling a bow and to keep my posture” said Nair.

Nair is one of the more serious competitors and trains with multiple arrows to simulate competitions. She went with the team to compete at nationals this past year.

Other students practice archery because it is related to their other interests. Greg Carlson, a junior finance and supply chain management major, wants to get into hunting and sees archery as a way to prepare for that while he attends Pitt.

“I like being able to provide for myself and not rely on others,” Carlson said.  “Being able to practice a form of marksmanship at school is really helpful for me.”

Lam explained that there are more ways to train other than using stretching bands and just shooting arrows. Personally, she does various forms of cardio training to help lower her heart rate, keeping her calmer in competition. She said weight training can also be beneficial for archers who pull a heavier weight resulting in high arrow speed — an important aspect in outdoor competition since it lessens the effect of wind on the arrow.

And in addition to working out, Lam spends time reading to mentally prepare for competition — but she usually reads books about golf.

“Golf and archery are actually very similar in the sense that after a certain point the competitors in the field are all capable of shooting the same or similar scores,” Lam said. “It is the mental part and the ability to stay calm that helps your earn a higher score in competition.”