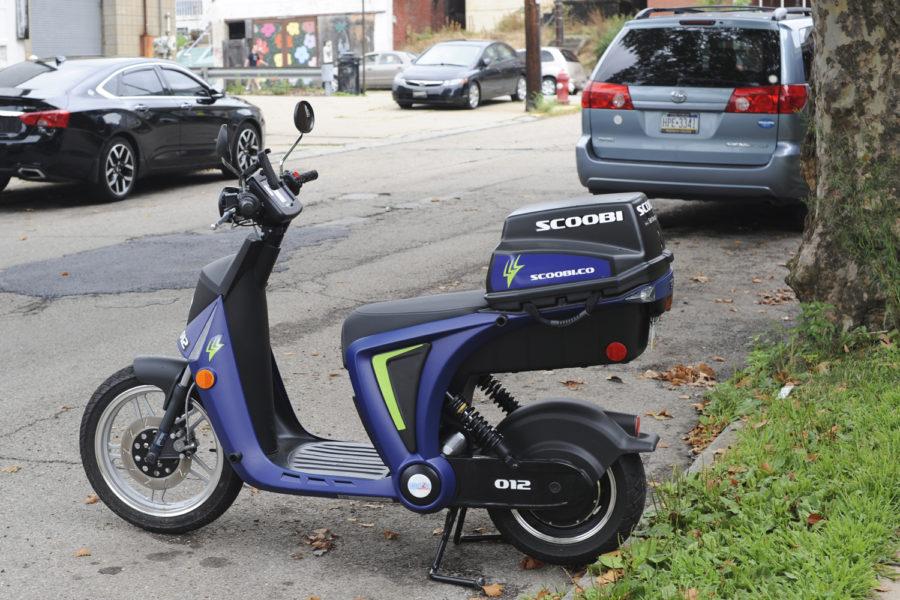 One of 100 Scoobi electric scooters placed around Pittsburgh July 21 sits on Penn and Roup avenues in Friendship. Anyone 18 and older with a valid driver’s license can rent the electric scooters using a smartphone. (Photo by Anne Amundson | Staff Photographer)

Rideshare programs like Uber and zTrip have new competition in Pittsburgh.

The Pittsburgh-based company Scoobi — no relation to the mystery-solving cartoon dog — is here to get more people on the road and cut down on emissions with its new fleet of rentable electric scooters.

“Something was missing,” founder and CEO Mike Moran said. Moran, a 2015 Katz Business School graduate, began working on Scoobi in August 2017 after experiencing the congestion in city traffic. “Biking can’t get you everywhere and cars are expensive for people to buy and use every day, and there’s no awkward conversation like there is with Uber and similar programs.”

Scoobi opened its first 100 scooters for public use July 21, offering the enjoyment of electric transportation in the city, though they are restricted from any roads above 35 miles per hour. The scooters display distance, speed, time spent riding, battery life and how much carbon dioxide was not produced as opposed to driving during the length of a ride. It costs $5 to ride for the first 15 minutes, then 25 cents more for each additional minute.

Capable of reaching speeds of around 30 miles per hour, Scoobi lets users learn to ride a motorized bike on public roads from 5 a.m. until midnight. A fully-charged Scoobi lasts around 30 miles, and features a regenerative braking system that allows for incremental charging while riding.

In the few weeks since its opening, Scoobi has already racked up over 10,000 miles and saved over 3,000 pounds of carbon dioxide, according to Moran. The company plans to add a major charging station on Pitt’s campus, letting multiple scooters charge at the same time so more people can use them for their commute. Moran sees Pittsburgh as a first step in a large-scale urban undertaking that will spread across the country.

“So far, the response to Scoobi has been overwhelmingly positive” Moran says. “It really added something different to the mix and is letting people have fun on their commute.”

Students and adults alike have begun trying out Scoobi for both enjoyment and to shake up their commute. Senior civil engineering major Andrew Dawson sees Scoobi as innovative and different. Dawson has used Scoobi three times since the service began.

“It’s a way to get people outside in the fresh air,” Dawson said. “It’s a great way to bond with friends too.”

Senior chemical engineering student Rico Romeo used Scoobi as an outing with some friends in early August, riding from South Oakland to Downtown. After watching the instructional videos provided by Scoobi, Romero said that he was able to ride right away without any issue. But for now, Romero only sees Scoobi as a recreational service, citing their cost.

“Right now they’re fun to ride for like a half hour at night,” Romero said. “If the price went down a little I think a lot more people would consider using them more practically.”

The riding experience was one that some had not expected to be as enjoyable as it was. Senior computer science major Brandon Kowalecki has been riding motorcycles for the past five years and was surprised how much fun Scoobi was. Kowalecki has used Scoobi twice to see how usable the service would be from Polish Hill to campus.

“It can be a little complicated to figure out at first,” Kowalecki said. “Especially without any experience on a motorcycle or moped.”

Kowalecki said that he expected the scooters to feel slower than motorcycles. But the electric power in the scooters surprised him. The lack of engine noise could be dangerous, he said, if people aren’t paying attention to their surroundings.

Kowalecki said the biggest drawback he sees with Scoobi is that it can’t be used in all forms of weather, being open to the elements unlike other services like Uber and Lyft. He views Scoobi as a service for entertainment at this point in its development.

“I see it as a fun way to get where you need to go or as a last-resort mode of transportation, but I definitely think it has a potential market in Pittsburgh, regardless,”  Kowalecki said.