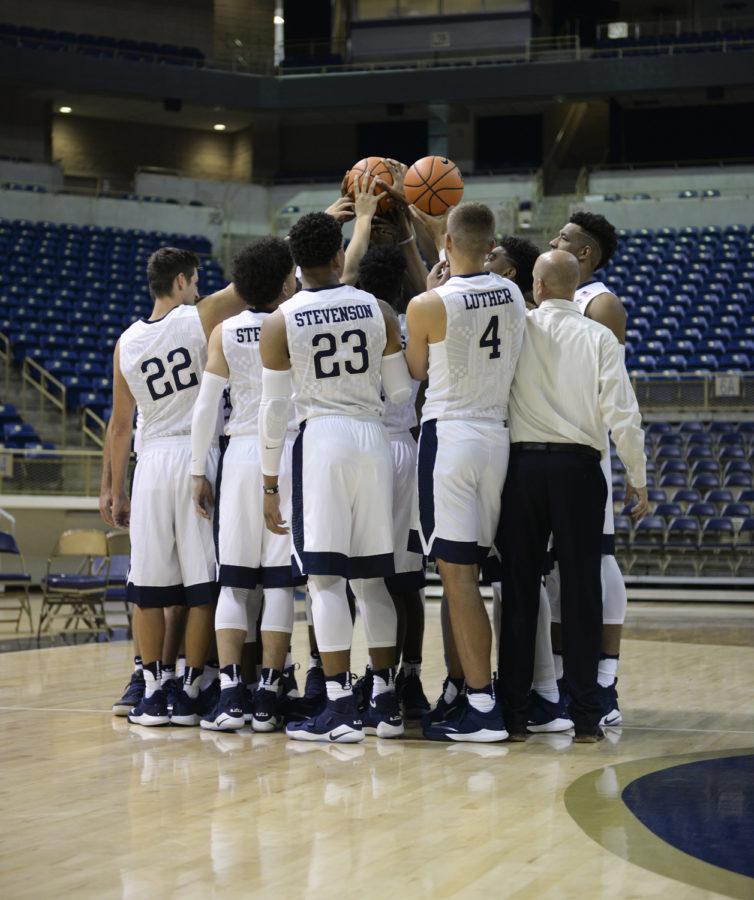 The 2017-18 basketball team stands in a huddle at a photoshoot during pre-season. (Photo by Anna Bongardino | Visual Editor)

Pitt’s 2018 Men’s Basketball team didn’t grow most during the off-season while lifting in the weight room or doing drills on the court, according to head coach Jeff Capel.

Instead, Arlington National Cemetery and The National Museum of African American History and Culture are where he believes the Panthers learned what it truly means to sacrifice for their team.

“I wanted our guys to learn about sacrifice,” Capel said. “The ultimate sacrifice is what the people who are in those two places have done for our country, for the world. And to see it, to hear about it, to learn about it and most importantly to feel it, we’ve done that.”

Those lessons will come in handy as Pitt competes in one of the toughest conferences in college basketball. Last year, the Atlantic Coast Conference had an NCAA conference-leading nine teams appear in the NCAA Tournament. And eight of Pitt’s opponents in the 2018-2019 season, including seven conference opponents, are ranked in CBS Sport’s Gary Parrish’s June top 25 college basketball rankings.

Capel was named head coach of the men’s basketball team in March, replacing Kevin Stallings, who was fired after leading Pitt to two losing seasons in 2017 and 2018. Pitt finished 8-24 overall in the 2018 season and 0-18 in the ACC. The Panthers were 1-13 on the road — the one win came at a neutral site — and at one point they lost 19 games in a row.

Capel came in knowing change was needed, starting with action off the court. He believes that the closer his team is off the court, the closer they will be on the court due to a stronger sense of trust and togetherness. Redshirt junior guard Malik Ellison agrees, and can already sense the change in the team.

“I feel like everybody is whole, everybody is one,” Ellison said. “We communicate on a daily basis and we all hang out and I think we are all getting closer and closer as a team.”

Capel’s next move was getting his new team to understand his emphasis on sacrifice over the months before the season began. Senior guard and forward Jared Wilson-Frame said the team works harder than any one of them have ever worked before and that there is no better proof than sophomore center Peace Ilegomah.

Between conditioning and workouts, Ilegomah has lost approximately 30 pounds in the past five months — and he isn’t alone. While Ilegomah’s transformation may be the most noticeable, according to Wilson-Frame, each player is making the necessary changes in order to compete at their peak this season.

“Every single day that we come in to workouts, practice, whatever the case may be, we give it our all, 110 percent,” Wilson-Frame said. “Our coaching staff … is pushing us to new levels as a whole. And the whole program is reaching new heights … it’s just a higher level than I’ve seen since I’ve been here. I haven’t been here that long, but the whole culture is different.”

Capel and his staff break up practices into individual, small-group and full-team workouts. Each practice focuses on something different, according to Capel and Wilson-Frame, and also incorporates what it means to sacrifice and be a real team player. After five months, players are already seeing a difference in the team. Last year, Ellison thought there was a lack of communication and support when someone made a good play in a game, but now notices a big change.

“I think this year already in our workouts when we make certain plays everyone is really engaged and hyped that he made that play,” Ellison said. “I think that’s the real difference from last year to this year, sacrificing yourself for the team and knowing that is how we are going to succeed.”

According to Capel, individual workouts have given the coaching staff a better chance to get to know each player better on a personal level. But they have also been used to focus and fine-tune each player’s basic skills like dribbling, ball handling and footwork.

The small-group and full-team workouts have focused a lot on defense — breaking it down into smaller parts and then building it back up to its full extent. In every drill, Capel makes sure his team knows how important it is to have each other’s backs, including one where a player has to communicate with his teammates constantly so that they can successfully support his blind side.

“We do a lot of drills where you have to be talking to each other and have to be communicating,” Wilson-Frame said. “You have to be there for one another or else … you won’t be doing the drill correctly or will fail to meet our objectives.”

As for whether or not the defense they practice is the same or similar to what fans saw last year, Capel doesn’t know. When he accepted the job, he didn’t watch any game film from last year. Instead, he decided to flush last year and focus on the present.

According to Wilson-Frame, if the fans want to know what to expect, they should look at the “old” Pitt teams — teams that were known for their mental toughness, competitiveness and high intensity level.

“You’ll see a team that will go back to the old days,” Wilson-Frame said. “A Pitt team that is willing to lay it down to whatever limits it takes to get over that hump and get that victory.”