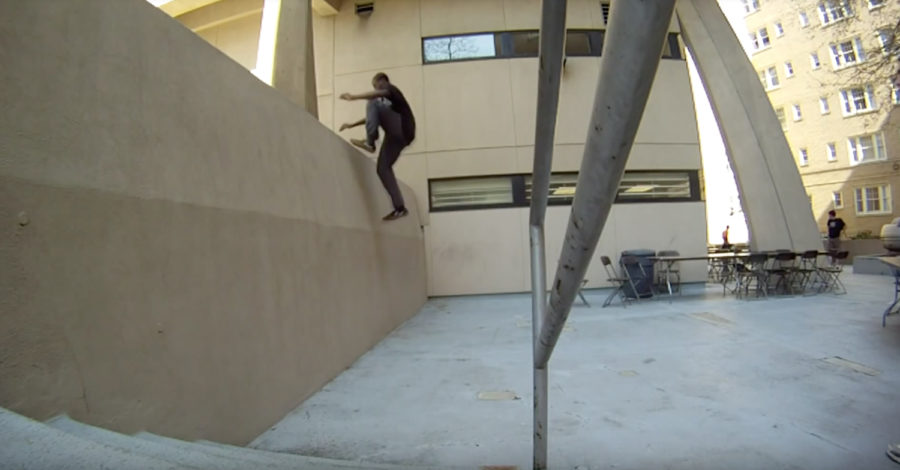 Kofi, a former Pitt Parkour member is known as “a legend” among current members for running up a wall at Ruskin Hall. (Screengrab via YouTube video by pantherflow1)

Between Ruskin Hall and the Information Sciences Building, Currier Wolfe and several other students jump, run and flip over impassable barriers made of high walls and banisters. There’s no set movements or drills to stick to in this sport — Wolfe and the others want to test their own physical boundaries by trying new tricks.

Wolfe, a junior environmental science and film studies major, is the co-captain of Panther Parkour — a Pitt club focusing on the outdoor gymnastics-like activity that utilizes architectural obstacles in a freestyle and artistic form of athleticism.

“About 75 percent of the students come in like me, with zero experience,” Wolfe said. “People come in with all different levels of athleticism and fitness and the club is very accomodating of all those levels.”

Wolfe discovered Panther Parkour the same way most students on campus discover their own clubs of interest — at the annual Student Activities Fair. Looking for non-competitive sports that didn’t require much of a time commitment, Wolfe turned to parkour, a sport they were vaguely interested in but never had the chance to pursue.

After their first practice — where new members learn to roll, precision jump and run up walls — Wolfe passed the beginner’s endurance test and wanted to continue to train their brain to overcome fears over and over again through the sport.

Wolfe said the first test for new Panther Parkour members is to run up a wall during the first one or two practices. They said it’s interesting to see who stays after trying and failing so many times.

“It’s a certain type of stress … that will often either make people decide whether or not this is going to be worthwhile to them,” Wolfe said.

As a completely non-competitive club on campus, the group focuses their time on teaching each other parkour tricks — whether free-running with stylish acrobatics or practicing elemental skills like running, swinging and climbing. Practicing as a group is not only safer for members, but allows them to constructively criticize and learn from one another.

The team usually practices twice a week in a single area of campus. Every once in a while, the group moves around campus — hopping to multiple locations during a single practice, in search of new challenges.

As the traceurs — as those who participate in parkour are called — constantly search campus for new structures to conquer, they find that Pitt’s campus provides a large variety of space that challenges each individual’s skills. Wolfe said a main rule of the team is that pedestrians have right of way and they try to pick locations and times when not a lot of people are around.

The group saves weekend practice for learning new tricks. Meanwhile, the weekday practice consists of conditioning and intense drills in order for the members to keep up the basic level of fitness necessary to participate.

“There’s usually one or two skills that we really like to use at each location,” Wolfe said. “Maybe we’re behind Ruskin and there’s some nice walls that go straight into the grass, so we just fall over those for an hour.”

Though the majority of the members are new to the sport, some members, like sophomore administration of justice major Jeremy ReoNason, have experience in similar fields like martial arts.

“I joined Panther Parkour almost immediately when I came to Pitt last year,” ReoNason said. “I’ve been training in martial arts for over a decade and began learning parkour in high school to supplement my skills in the martial arts. Plus, parkour is a lot of fun, extremely fulfilling and practiced by amazing people.”

On the surface, parkour is a way of navigating an environment through the teachings of fluid motions, ReoNason said.

“Gymnastics is great for agility, and martial arts for self defense and dexterity. But as far as practical evasive movements, parkour is it,” ReoNason said. “It teaches you how to fluidly navigate a typical urban environment.”

But parkour is much more than its physical challenges of jumps, flips and runs. It’s a mental challenge as well — and for junior linguistics major Kevin Marston, that’s the best part.

“[Practices are] almost a discussion, with, of course, the most experienced people leading the discussion,” Marston said. “The biggest obstacle to you doing [a trick] is you thinking to yourself that you can’t do it.”

Marston, who has been part of the club since his first year at Pitt, said he has yet to overcome the nervous feeling he gets before trying a new trick. Traceurs have to first be willing to attempt difficult tricks by opening their mind and convincing themselves to go for it.

“You honestly come out of it surprised that you were able to do that because your brain didn’t think you could, but you were more than able to,” Marston said. “That’s one of the first things I was taught when I started out — that your biggest opponent is not your body, but your mind.”

Essentially, the traceurs on the team self-teach these physical and mental skills. But they also give much credit to each other, their predecessors and online videos. The basic skills they have learned allow team captains, like Wolfe, to develop ideas for new, different and interesting combos that the athletes can learn.

“One of the best things about being modern university students is that it’s the digital age, so not only can we keep teaching new members what we learned from the people who taught us, but we can then also go online, find other people who do things and look up tutorials,” Wolfe said.

With the abundance of open spaces around campus, Panther Parkour can easily accomplish what it was set to be — a group of people that enjoy parkour, coming together and learning from each other.

“There’s something really fantastic about running up a 12-foot wall when at the beginning of the semester you could barely run up a 7-foot wall,” Wolfe said. “And just knowing that I can move my body, I can just get around the world in this way that not a lot of people can, it’s just very satisfying.”