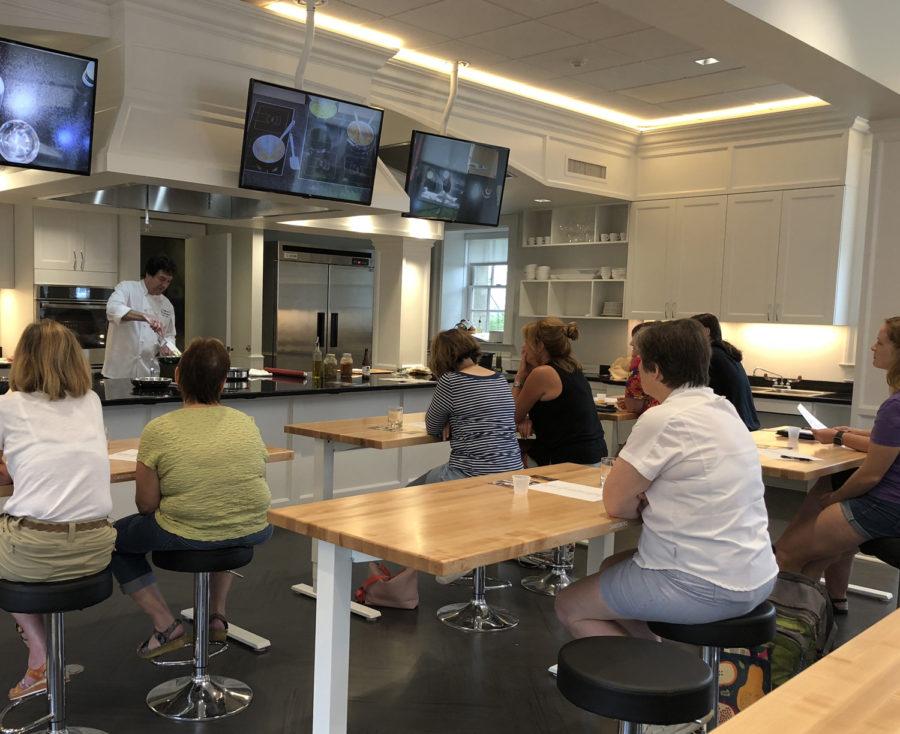 While a farmers market sat crowded on the lawn outside the main hall of Phipps Conservatory, an 18-student cooking class learned how to make new cuisines with the market vendors’ products in the newly refurbished Botany Hall. Phipps is cooking up something special, and wants to share it with anyone interested.

Phipps Conservatory has always offered its beautiful gardens to the public, but recently added a new attraction — cooking lessons. Throughout this culinary arts course, local chefs teach students about different cuisines to empower students to find their own talents in the kitchen. The course allows students to get hands-on experience working with recipes from chefs from throughout Pittsburgh.

The lessons happen once a month and take place during the monthly farmers market, where all ingredients used are available for purchase. The theme for August was tomatoes and garlic.

The leader of Sunday’s lesson was Oakdale-based Cafe Chocolade owner and chef James Kaufmann, who has more than 36 years of culinary experience.

“I’ve gotten to travel the world learning from different cultures to help make my style of food,” Kaufmann said. “Being able to share it with people is one of the best parts of working with cuisine that others might not know.”

Kaufmann began the lesson by explaining his background, from the first kitchens he worked in to the awards his dishes have won in the past. He also brought some of his products for students to sample while he taught the class how to make three dishes focused on Mediterranean cuisine.

The first dish he taught was his recipe for an avocado-based chutney, which he followed with a tomato-based chutney. The next was a sesame- and bean- based hummus which he said could be made with a variety of beans depending on the flavor requested. These were all prepared to pair with a multigrain flatbread that he showed.

While instructing the students, Kaufmann shared anecdotes from his own life. Kaufmann said that he disliked working in large-scale kitchens early in his career.

“The one thing that was terrible about working in a normal restaurant was not knowing what I would be making next,” Kaufmann said. “I went into pastry making at smaller shops because I always knew how many of what needed made.”

Kaufmann said that he enjoys seeing people trying to learn new skills, and that when he was given the chance to teach others about his culinary style he was more than happy to accept. He thought his Phipps students would have limited cooking experience, but to his surprise some of them had experience working with food in the past.

“I didn’t expect some students to be able to identify different elements of the food so easily,” Kaufmann said. “It made explaining changes to recipes easier.”

Kaufmann was happy to see the variety of students in attendance for his lesson — and that’s part of Phipps’ intention, according to Associate Director of Adult Education and Community Outreach Gabe Tilove.

“One class we might be doing Chinese food or Indian food, the next could be grain-focused,” Tilove said. “Some classes will be on particular things like that to spread cultural awareness.”

Tilove said the program has been very successful so far — each class is already sold out for membership, even though the kitchen only opened in May 2018. Tilove wants to make sure that Pittsburgh as a whole remains understanding of and embraces cultures that run throughout the city.

“It’s nice to see the audience for this program thriving,” Tilove said. “Seeing a mix of demographics lets me know we will have an accepting city.”