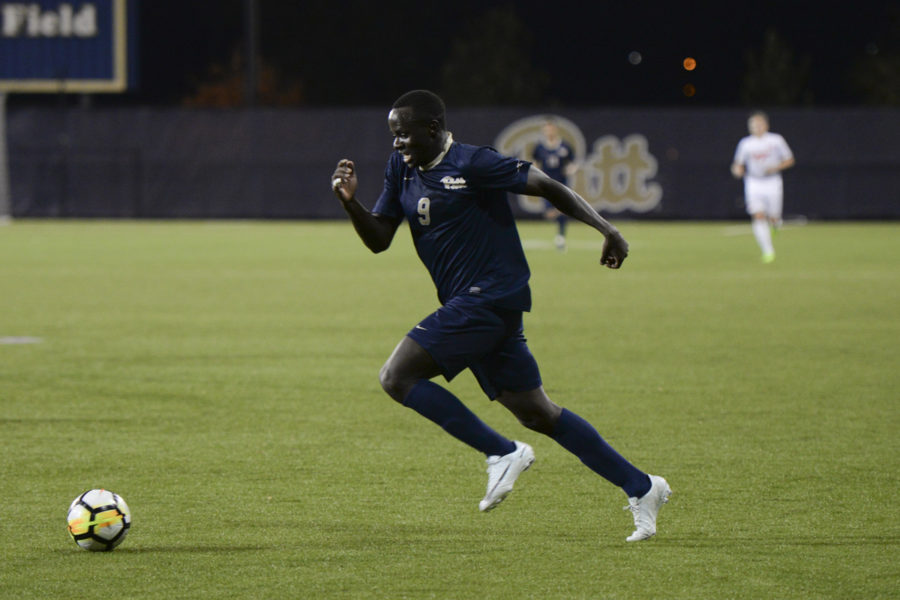 Although the fall sports season is barely a week old, several Panthers have already begun to establish themselves as playmakers on their respective teams. The women’s soccer and volleyball teams emerged from the first weekend undefeated and unscathed, while the men’s soccer team faltered in its season opener but earned a win in game two. From hat tricks to all-conference performances, here are the athletes who made a splash in the opening week of Pitt sports.

After an impressive first-year season in which she earned ACC All-Freshman honors, sophomore Kayla Lund came into this year with big expectations — especially with Pitt volleyball ranked No. 1 in the ACC preseason rankings.

Lund more than lived up to the hype during the team’s opening three-game tournament — dubbed the Panther Challenge — which took place at the Fitzgerald Field House over the weekend. She accumulated 42 kills on a 0.468 percentage, while also contributing 32 digs across the three victories.

Lund showcased her well-rounded skill set Friday afternoon in the team’s season opener versus Butler, notching double digits with 10 kills and 11 digs. She would go on to record another double-double on Saturday against Pepperdine with 12 kills and 12 digs. Her efforts led the way to a 3-0 sweep in both contests.

But the highlight of Lund’s weekend came versus No. 24 Cal Poly on Friday night, when she amassed a career-high 20 kills. The dominant performance propelled the Panthers to a 3-1 win — their first victory over a ranked team since 2016.

“This was perhaps the strongest weekend I’ve ever seen by a Pitt outside hitter since I’ve been here,” Fisher said. “The honor is well deserved.”

Lund and the rest of the women’s volleyball team will face their next test on Friday, when they head to New Jersey to face Oklahoma in game one of the Seton Hall Classic.

Sophomore Edward Kizza, along with the rest of the men’s soccer team, started the season on an unfortunate note with a 1-0 loss to No. 25 Colgate in the season opener. Despite leading the Panthers with five shots and four shots on goal, none of Kizza’s shots found the back of the net.

Opportunity breeds success, however, and Kizza continued to pepper the net with shot attempts Monday night in the team’s next game at Delaware.

This time, the ball found the target on all three of Kizza’s shots, giving the forward his first career hat trick — and nearly matching his previous season total of four goals. Like Lund, the University named Kizza as its other Student-Athlete of the Week.

Kizza’s three-goal performance made him the 20th Panther in program history to accomplish that feat, but he didn’t need all three goals to set a Pitt record — his finish off a cross from sophomore teammate Alexander Dexter just 1:40 into the match was the quickest goal scored in team history.

The Panthers will need another high-caliber performance from Kizza if they want to pull off an upset in their next match against No. 6 Akron this Saturday at 7 p.m.

The women’s soccer team won just three games last year — but in its first four games this season, the team has already matched that. The Panthers stayed undefeated Sunday afternoon with a win over Jacksonville to improve to 3-0-1.

One of the biggest reasons for the dramatic one-year turnaround has been first-year forward Anna Rico, who paces the team by large margins with three goals, 20 shots and 11 shots on goal. For comparison, the next closest Panther in each category has one goal, 11 shots and four shots on goal.

Rico made her presence known in the Panthers’ season opener, a 2-1 victory over Ohio, when she scored the team’s first goal of the season. She showed discipline through all 120 minutes of the team’s second game against Morehead State, scoring the winning goal to break a 0-0 tie in the 103rd minute. Rico then kept the scoring streak alive in Pitt’s third game when she netted the team’s lone goal in a 1-1 draw versus Kent State.

In an effort to distribute the scoring, head coach Randy Waldrum moved sophomore defender Aideen O’Donoghue up to the offensive front for the team’s next game against Jacksonville. O’Donoghue and sophomore midfielder, Dixon Veltri, scored their first career goals to earn the 2-1 win, but Rico still led the team with three shots and received praise from Waldrum after the game.

“We were just trying to find somebody else that has some hunger to score other than Anna [Rico],” Waldrum said.

Rico will look to continue her scorching start — and keep the Panthers undefeated — in the team’s next game at TCU Thursday at 8 p.m.