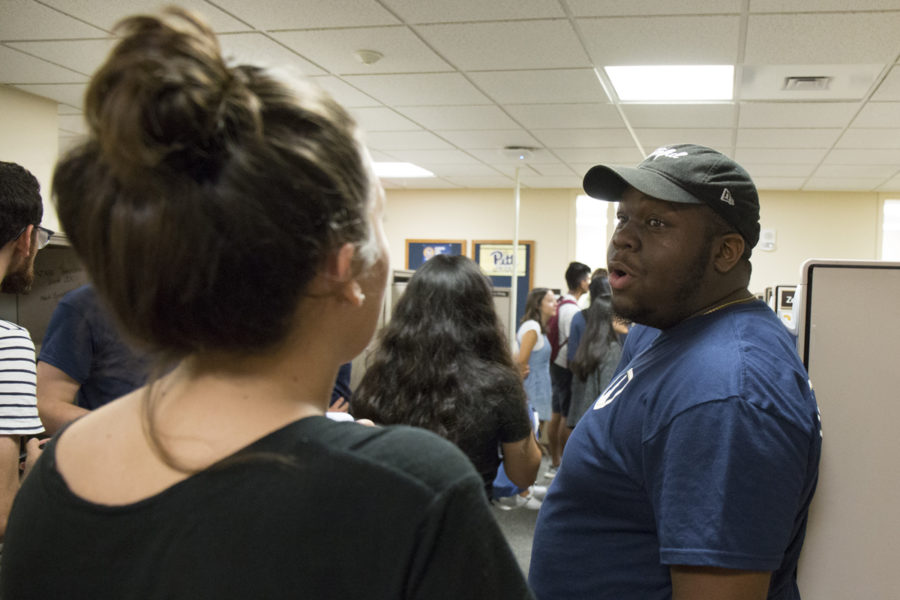 Over snacks and refreshments at the Student Government Board open house Tuesday night, first-year student Nina Duong approached SGB President Maggie Kennedy to see how she could be more involved on campus.

“I knew I wanted to do student government,” Duong said. “But I don’t know where to get started.”

“Of course,” Kennedy said as she beckoned her closer. “There’s so many ways to get involved.”

And for first-years in particular, there are plenty of open positions. The First Year Council — “a small group of First Year Students who demonstrate early potential for campus leadership,” according to its website — has between 10 and 12 open positions for the coming year.

According to Kennedy, applicants are expected to fill out a detailed form, provide a resumé and answer essay questions. Kennedy, the chair of the committee, political science major Ami Fall and chief of cabinet Jessa Chong will read applications and select the board.

Kennedy said the board selects candidates via application — as opposed to voting — because of first-year students’ relative inexperience with Pitt.

“As a first-year student, you’re just getting accustomed to campus,” Kennedy said. “An election could be a popularity contest.”

In addition to a good resumé, Fall said she prioritizes diversity and enthusiasm for First Year Council applicants. She’s looking for prior leadership experience, an interest in getting involved at Pitt and membership in different clubs and social groups on campus in prospective candidates.

“We work very effectively because we have people from different backgrounds,” Fall said.

But she acknowledged that tensions can flare in rooms full of people with different ideas and backgrounds.

There are five application-only positions available on three other SGB committees for the coming year, including an open first-year position on the Allocations Committee, three spots for students of any age on the Elections Committee and one first-year spot on the Diversity and Inclusion Committee.

All committee applications are due Friday, Sept. 7, with the exception of the Diversity and Inclusion application, which is due Friday, Aug. 31. Application materials can be found in the “Join SGB” section of SGB’s website.

In addition to application-only committee positions, there are four committees that anyone can join — Academic Affairs, Facilities, Technology and Transportation, Community and Government Relations, and Wellness. Kennedy got her start in SGB in the Wellness Committee her sophomore year.

“I was an RA in Tower A, and a friend told me I should work on the Wellness Committee,” Kennedy said. “I started showing up to meetings, was elected chair that spring and ran [for president] the next year.”

And Kennedy has big plans for her year as SGB president. SGB will host Civic Engagement Week Sept. 10-14, during which SGB will inform students of their rights and help them register to vote in the upcoming midterms.

“SBG is a non-partisan organization,” Kennedy said, “but it’s really important to get people out to vote.”

There’s also a Fall Safety Fair planned for the weekend of Sept. 18. SGB’s Community and Government Relations Committee and Facilities, Technology and Transportation Committee planned the event in conjunction with the Pitt police, the Wellness Center and Pitt’s Title IX office.

SGB is also preparing for October Mental Health Awareness Month, during which it will host speakers, workshops and a Self-Care Fair on a weekend yet to be determined. Kennedy is also pushing an initiative to foster more discussion about mental health on campus.

“Every Tuesday of October, RAs will be wearing green mental health awareness T-shirts. People can approach them to talk about mental health on campus,” Kennedy said.

“People told us [The Women’s Leadership Weekend] was so great, but then we just left at the end of the year,” Kennedy said. “We want to give students more time to develop those relationships.”

Esteban Vazquez, a sophomore transfer student from the University of Puerto Rico, said he was impressed by the board’s enthusiasm.

“Everyone was like, ‘join me, join me,’” Vazquez said. “I want to be in student government.”

Hannah Srock, a first-year engineering major from Butler, participated in student government at her high school and wants to get involved at Pitt.

“Stuff like this makes a bigger school feels small. It makes me feel like I can do something that makes a change,” Srock said.