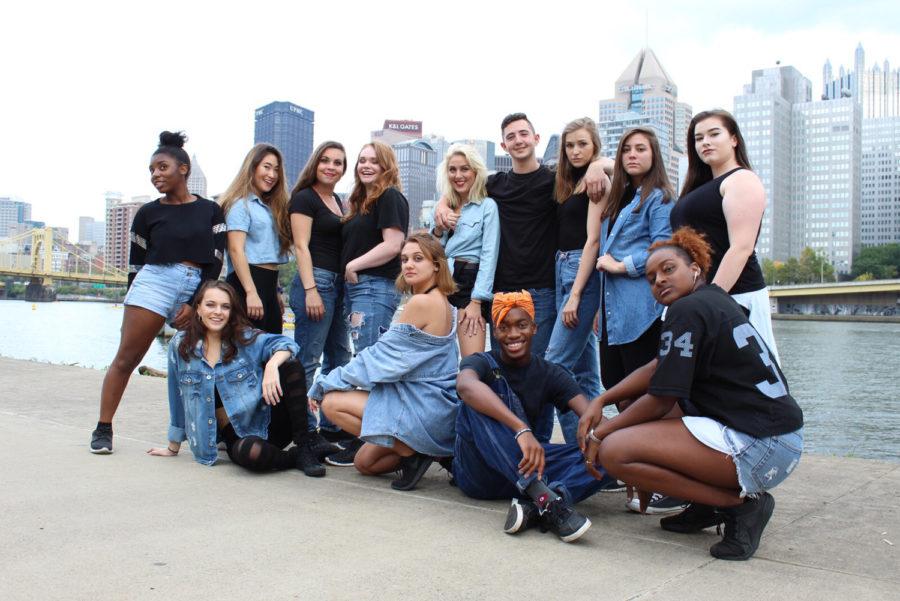 The hip-hop ensemble Controlled Chaos poses in black and denim outfits for a photoshoot. The group currently has 10 full-time members. (Photo courtesy of Mia Krawczel)

Before MisterWives took the stage to perform for the masses this April at Bigelow Bash, early attendees got to watch a performance from Pitt’s hip-hop dance cohort Controlled Chaos — the winners of The Pitt Factor, a talent competition organized by the Pitt Program Council to find an opener for Bigelow Bash.

Dressed in matching black and white costumes, the ensemble took the stage. Students in the crowd bobbed their heads along to the beat as soon as the crew busted their first moves.

Controlled Chaos, founded in 2010, currently has 10 full-time members and holds auditions during the fall semester. According to its website, the group’s goal is to promote different styles of hip-hop dance. But for those that plan to audition, there is a way to gain an advantage, said senior psychology major and Controlled Chaos Vice President Cassie Rompala.

But not all students who participate in the classes are required to join the team. Everyone is welcome to Controlled Chaos’ weekly Thursday classes in the Petersen Events Center. The choreography ranges from beginner to more advanced and is taught by Controlled Chaos members. Even for beginners who have never danced a step in their lives, the group provides a chance to relax while breaking a sweat.

“The energy is always super great. I never go and then regret going,” sophomore psychology and statistics major Mia Krawczel said. “And dance is such a nice stress reliever, especially hip-hop dancing, because the music is so versatile and so different.”

Krawczel said that anywhere from 15 to 50 people show up to each class, all of which are free for students with a Pitt ID. The group also puts on several performances each semester, including a routine at Haunted Holland in October, a flash mob in the Towers Lobby and routines at other dance teams’ and student organizations’ events.

“If another organization is having some type of show or just any type of event where they’re having talent perform, we’ll reach out to them or they’ll reach out to us and we’ll show up,” Rompala said.

The thought of performing in front of large groups of peers can be intimidating, but since dancing — like all exercises — releases mood-boosting endorphins, the act can actually raise self-confidence and make you feel good all over. Being in the moment and just focusing on dance is Controlled Chaos President Elana Carr’s favorite part of being in the group.

“[Dance has] definitely made me more confident, especially with Pitt being such a big school. You can feel very small in it,” Carr said. “I feel like now I’m a more outgoing person just because dance connects people in so many different ways.”

Human connection is a theme in the larger dance world as well as for Controlled Chaos. Rompala said the group has both external and internal objectives.

“We definitely have a goal of kind of reaching out and kind of spreading awareness around campus about dance and just brightening up people’s day,” she said. “We try to create a space each week for all the dancers to come in and de-stress.”

All the hard work throughout the year leads up to Controlled Chaos’ annual spring showcase, where both full members and regular class attendees can show off what they’ve learned. Dancers get a chance to choreograph their own routines and audition other members for spots, and it’s a chance to explore different styles and display the group’s cohesiveness.

For those still not sold on branching out and shaking their hips at one of Controlled Chaos’ weekly classes, Rompala has some advice for first-time learners.

“Relax into it and let the grooves take you,” she said.