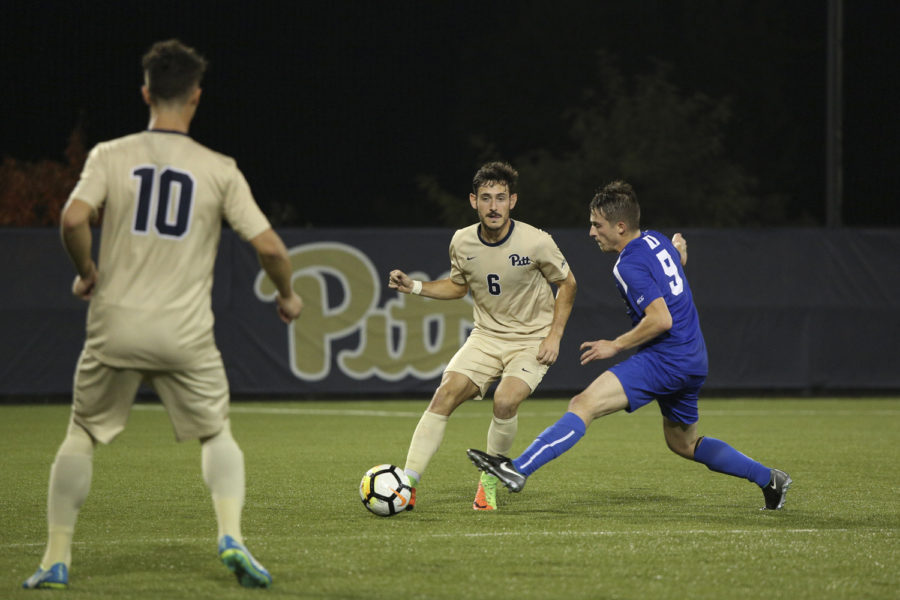 Then-junior Javi Perez scored one of the Panther's three penalty kicks in their 4-3 loss to Duke. (Photo by Thomas Yang | Assistant Visual Editor)

By Nick Carlisano, For The Pitt News

Pitt sports had a busy opening weekend for the academic year — women’s volleyball, cross country and men’s and women’s soccer all suited up for competitions. But the Labor Day holiday weekend did not end in victory for all four Panther teams. The women’s volleyball team continued to dominate, becoming champions at the Seton Hall Classic, and the cross country team performed well at the Duquesne Duals in Schenley Park. But both of Pitt’s soccer teams fell to their opponents on the road in hard-fought matches, with the men’s team losing the battle against the fourth-ranked Akron Zips.

The women’s volleyball team breezed through this weekend’s competition at the Seton Hall Classic in South Orange, New Jersey. Our 14th-ranked Panthers swept their three opponents this weekend, marking an impressive 6-0 record on the season thus far. The team took down Oklahoma 3-1 Friday, then Seton Hall 3-0 and VCU 3-0 Saturday.

The Panthers got off to a shaky start Friday afternoon when they dropped their first set against Oklahoma 25-16, but that didn’t stop them from taking the next three sets. At scores of 25-19, 25-21 and 25-22, they overcame tough Sooner runs and double-digit deficits throughout the match to rise to the top. Pitt beat Oklahoma in every major statistical category except blocks, with junior Nika Markovic racking up a match high of 17 kills.

Host Seton Hall posed less of a challenge as the Panthers swept the Pirates 25-20, 25-18 and 25-21 Saturday morning. The Panthers dominated across the board once more by leading in every category except blocks, where they tied the Pirates with six apiece. Sophomore Chinaza Ndee led the charge with 14 kills in this match and senior setter Kamalani Akeo picked up an impressive 28 assists.

To finish the weekend off, the Panthers swept VCU, continuing their undefeated season and becoming champions of the Seton Hall Classic. The team cruised to victory 25-16, 25-20 and 25-11. Sophomore Kayla Lund shined once again, leading both teams with 13 kills. Lund has now hit the mark of double-digit kills every match this season. She also tallied 10 digs to net her fifth double-double.

Head coach Dan Fisher led the team to dominance in its six matches this season, sweeping through both the Panther Challenge and the Seton Hall Classic, while only dropping two sets in total. The volleyball team plays at the Panther Invitational starting Saturday, which will include challenges against ranked opponents Washington, Dayton and Kennesaw State.

The men’s soccer team fell to Akron 1-0 Saturday night in Ohio to become 1-2 on the season. Akron sophomore David Egbo notched the lone goal of the evening in the fifth minute to give the Zips a permanent lead.

Despite outshooting Akron 13-9 and 9-1 in the first 45 minutes, the aggressive play just didn’t come to fruition. The Panthers also led the Zips 3-2 in saves, with an impressive two of the three scored by first-year goalie Johan Penaranda late in the match to keep his team alive. Senior midfielder Javi Perez led his squad with four of the 13 shots.

While the defeat to the Zips drops the Panthers to 1-2, their two losses have each been by only one goal against top-25 opponents, No. 4 Akron and No. 25 Colgate. They have another tough task ahead of them this Saturday when they travel to Chapel Hill to face off against No. 12 North Carolina.

The Panthers suffered a 4-1 loss to North Texas on Sunday, concluding their two-game road trip to the Lone Star State.

The Mean Green started off the action with a quick score two minutes into the game, then found the back of the net again to extend its lead to 2-0.

The Panthers cut the North Texas lead in half when senior Mikayla Schmidt scored her first goal of the year. The Mean Green took back its two-goal lead in the 22nd minute and the Panthers just couldn’t catch up. North Texas ensured a win by adding a fourth and final goal in the 47th minute of the match.

First-year Katherine Robinson recorded three saves in the first half in her first start at keeper. Redshirt sophomore Amaia Pena took over in the second half and made two stops of her own.

Pitt starts a three-game home stretch against hometown rival Duquesne on Thursday. Both the home swing and the Panther’s non-conference play will conclude against No. 19 Kansas on Sunday. The team will see its first ACC action of the season against Louisville Sept. 15.

The cross country team performed well, particularly on an individual scale, over the weekend at the Duquesne Duals invitational in Schenley Park. The women came in second out of six teams while the men placed third out of four teams.

First-year Caelan Miller recorded the best women’s time of the day for Pitt at 18:40.95, a time that gave her the fourth-best finish out of 54 female runners. Senior Erin O’Connell rounded out the top 10 at a time of 19:20.67.

The men’s cross country runners ranked third behind Duquesne and Carnegie Mellon at the invitational. Like Miller, junior Jackson Morton came in fourth out of 36 male runners with a time of 26:01.95. Sophomore Josh Higgins and first-year Tyler Rollins came in 12th and 13th for the Panthers, respectively.

Cross country will head to University Park on Friday for the Harry Groves Spiked Shoe Invitational hosted by Penn State.