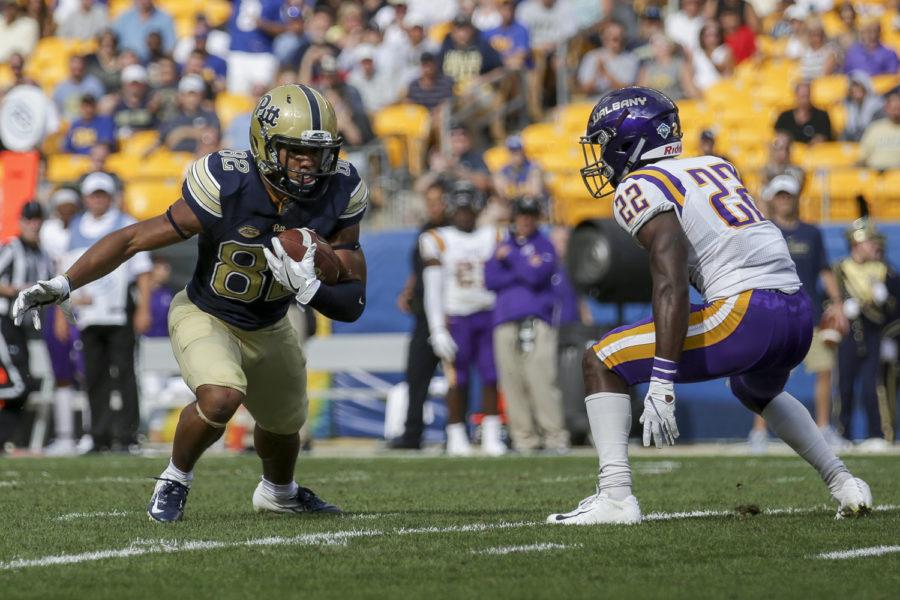 The Pitt football season kicked off Saturday on a promising note, with the Panthers soundly beating the Albany Great Danes 33-7.

Blowing out a lesser FCS opponent might seem like nothing to write home about, but it was a welcome performance after years of seeing Pitt play close with Youngstown State. This 26-point win marked the Panthers’ largest first-game victory margin since the 62-0 win over Delaware in 2014.

The Pitt defense held Albany to just seven points, but that was more a product of opportunism than consistency. The box score showed a more even result, with the Panthers outgaining their opponent by just 84 yards, 407 to 323. If Albany senior quarterback Vincent Testaverde didn’t throw two late-drive interceptions in Pitt territory, the final score might have looked a little less favorable for the defense.

The Panthers’ offense, meanwhile, put on a clinic in balance and consistency.

In the rushing game, a whopping seven players recorded at least two carries. Senior running back Qadree Ollison led all rushers with 73 yards, while sophomore running back A.J. Davis received the most touches with 13. However, no Pitt running back found the end zone — sophomore quarterback Kenny Pickett and junior wide receiver Maurice Ffrench contributed the team’s two rushing touchdowns.

The distribution of carries marked a drastic difference from last year’s approach, where senior running back Darrin Hall and Ollison were responsible for nearly all the rushing production. In the 2017 season opener against Youngstown State, for example, the duo took a combined 35 of the Panthers’ 53 carries. Davis touched the ball only four times.

The experienced duo of Hall and Ollison was expected to continue carrying the brunt of the workload this season — the fact that Davis received more carries, 13, than both of them combined, 11, came as a major surprise. But Davis’ hefty workload can be seen more as smoke and mirrors than a changing of the guard, as head coach Pat Narduzzi was likely making a concerted effort to rest his workhorse running backs amidst a blowout.

The performances of Pickett and Ffrench, however, were no facade — these two players both showed that they will be legitimately dangerous in the run game. Pickett showed off his touted mobility throughout the contest, rushing six times for 42 yards while refusing the Great Danes even one sack. Pickett’s rushing ability is a major upgrade from the Max Browne-Ben DiNucci tandem of 2017 — Browne averaged a pitiful -3.9 yards per rush while DiNucci averaged 2.3.

Ffrench did his best impersonation of former Pitt speedster, return man and gadget specialist Quadree Henderson. He made the most of his touches, taking the opening kickoff 91 yards untouched for a touchdown and averaging 8.5 yards on his two offensive carries — one of which was a nine-yard touchdown run.

It’s unclear if this backfield platoon system will be a fixture moving forward, or if it was merely an effort to mask Pitt’s true offensive intentions ahead of this week’s game against Penn State. Hopefully it’s the former, as a balanced attack of capable rushers will keep everyone’s legs fresh and keep the opposing defense guessing about who will take the next carry. The plan worked great in game one, at least, with the Panthers racking up 238 rushing yards as a team.

“I’d be happy if we get 238 [rushing yards] every game,” Narduzzi said afterwards. “I don’t know who rushed for what. Doesn’t matter. We’re a team back there.”

The Panther backfield might be a team effort, but the quarterback position — unlike last year — is a one-man show. Pickett did all that was asked of him in the passing game, completing 16 of his 22 passes — including a perfect 13 for 13 at halftime — and two passing touchdowns.

But the real MVP of Pitt’s offense on Saturday was not Pickett, Ffrench or senior wide receiver Rafael Araujo-Lopes, who caught both of Pickett’s touchdown passes. It was Shawn Watson — the Panthers’ offensive coordinator. Watson’s smooth play-calling put his offensive players in great positions to succeed throughout the game.

Under Watson’s direction, the Pitt offense capped off its first four drives with touchdowns and did not have to punt the ball until the fourth quarter. And on a promising note, the Panthers did not find success solely on the basis of having bigger, stronger and faster players than their FCS opponent. The offense, rather than busting off breakaway plays, scored by driving the ball with long, orchestrated drives, consistently picking up four or five yards a play en route to the end zone.

That’s a good sign because it shows that the Panthers will not rely on big plays to score, as was often the case last year. If Hall didn’t take off for an 80-yard touchdown run, or if Jester Weah or Henderson didn’t outrun the entire defense on a long reception, Pitt usually didn’t score. That approach resulted in 33 total touchdowns last season — the least in the ACC.

This isn’t Watson’s first season as offensive coordinator — that was last year. But as a first-year coach who was trying to implement a new system, he deserves some slack for the Panthers’ poor offensive numbers in 2017.

If Saturday’s game was any indication of what we can expect to see from the offense, then Pitt could be in line to return to its 2016 form, when the Panthers averaged an ACC-second-best 40.9 points per game. Watson appears to be borrowing from many of the same concepts — jet sweeps, play-action and short passes — that led former offensive coordinator Matt Canada to have success that season.

Those offensive schemes had a high rate of success versus the Great Danes on Saturday. The Panthers ran seven sweeps to non-running backs including Ffrench, Araujo-Lopes and first-year Shocky Jacques-Louis. Those plays produced an average of eight yards, meaning Pitt’s receivers will continue to play a pivotal and productive role in the rushing attack.

When the Panthers did throw the ball, Watson usually incorporated play-actions and rollouts to keep the opposing defense on its toes. He also made sure that Pickett had plenty of short check-down options to complete high-percentage throws — of Pickett’s 16 completions, only three of them went for 12 yards or more. The majority were dump-offs to keep the chains moving — a product of Watson’s West-Coast style, a “not pretty but effective” offense.

It’s true that Albany will be the worst team Pitt plays this season, so the Panthers’ victory can be taken with a grain of salt. But aside from the impressive stats in the box score, the Panther offense showed its potential to succeed on a schematic and conceptual level. If Pickett & Co. can continue to grind out lengthy scoring drives under Watson’s offensive system, Pitt should be able to contend with its most difficult opponents in 2018.