Allegheny County residents fight for clean air in a city of major polluters. 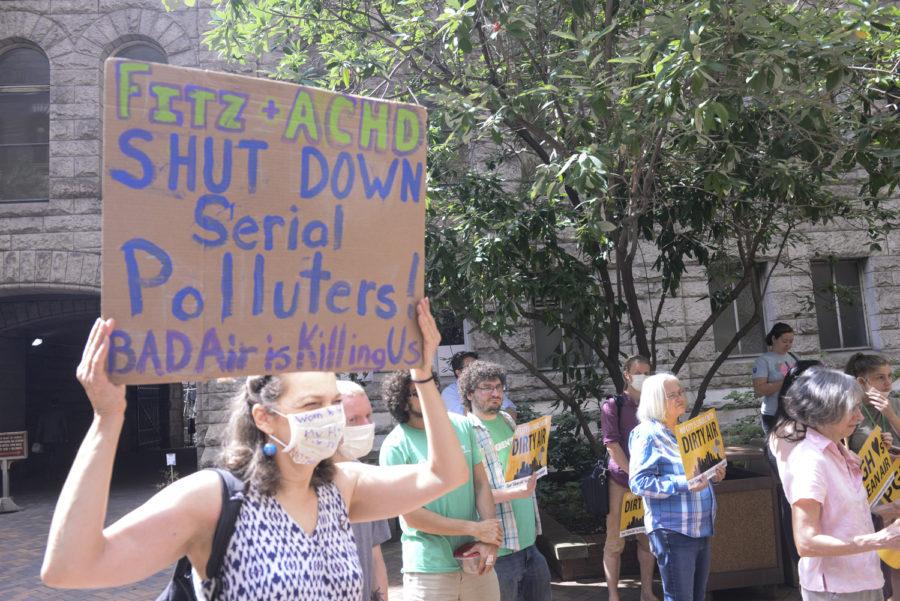 Dianne Peterson lives and breathes air quality. Whether she’s taking her dog for a walk, gardening around her home or watching her son play soccer outside, the air quality often leaves the O’Hara Township woman wondering if stepping outside is even worth it.

“I have to check the air quality and then I have to decide whether it’s worth impacting my health,” Peterson said. “I can’t believe how much this impacts my life.”

Peterson, along with about 20 other Pittsburghers, arrived carrying signs to the Allegheny County Courthouse Friday for Fridays with Fitzgerald — a weekly rally for clean air in Allegheny County.

“We’ve had hundreds of people show up this summer to rallies just like this one,” Deemer said to the gathered crowd. “I’m really pleased to report that this campaign seems to be working a little bit.”

Those attending rallied for County Executive Rich Fitzgerald’s attention and to encourage him to take a stand against major polluters in the county.

“We have industrial polluters in Allegheny County who are not being held accountable,” Deemer said to the crowd. “That is unacceptable, I know you all agree and that’s why you’re all there.”

According to the American Lung Association’s 2018 “State of the Air” study, Pittsburgh is ranked 10th out of the 25 U.S. cities most polluted by short-term particle pollution. Allegheny County is also in the top two percent for cancer risk from air pollution in the country — a problem that, according to Peterson, the county can remedy.

“Why am I here? Because this is not OK that I have to rule my life based on what the air quality is,” Peterson said. “And quite frankly, this is fixable.”

Deemer cited Pittsburgh pollution giants as a main cause of the bad-air epidemic, naming Clairton Coke Works as a prime offender, which this summer was fined over $1 million for it violating pollution laws.

“We’ve got a new enforcement action to Clairton Coke Works demanding that they pay over 1 million dollars for the pollution coming from that plant raining down on the land and impacting communities across the City and the region,” Deemer said. “They have to clean up their batteries — [Clairton] Coke Works — which is a really huge step and kind of unprecedented.”

Deemer noted the effects pollution has on school children in the county, saying some schools experience twice the rate of asthma of other schools in Pennsylvania and the country — and said that they will continue to hold clean air rallies for “vulnerable people, older folks and kids” until the county decides to hold these polluters accountable for their actions.

Though Deemer still sees room for improvement in Allegheny air, she acknowledges the Allegheny County Health Department is working to help citizens breathe easier. The department has demanded that Clairton Coke Works pay for their damage to air quality, and they’ve also spent money and resources on educating the community about air pollution issues and public health, as well as promoting clean air projects.

“That’s a big deal,” Deemer said. “That is a step in the right direction.”

Lee called on politicians as another avenue for change in air quality. Though admitting environmentalism wasn’t an issue at the forefront of her mind before her campaign, Lee now sees clean water and air as inherently political issues.

Though Fitzgerald hasn’t made any appearances at the clear air rallies, Deemer says they have communication with the county executive as they work to elevate the voices of Pittsburghers who are fed up with the current climate.

Deemer and other rally organizers recognize going up against major pollution contributors like the coke plant is a tough task, and want to do all they can to support efforts by Fitzgerald and the health department while making it clear that the clean air council has no plans of backing down from its own clean air initiatives.

Deemer didn’t say when the next Friday with Fitzgerald will be, but said that ralliers will continue to meet until Allegheny County has clean air — and, as Peterson hopes, bring awareness to the cause.

“I asked random people around the universities, around Squirrel Hill, about the shell cracker plant for one year before I had one person know what it was,” Peterson said. “That’s frightening, because it will impact us here.”