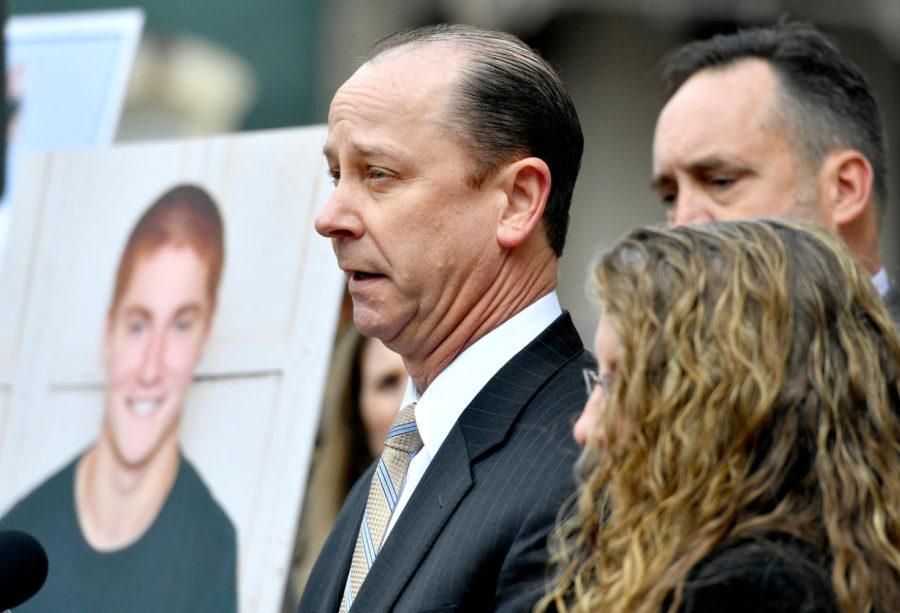 Jim Piazza speaks about the importance of passing the anti-hazing legislation named after his son, Timothy Piazza, outside of the Centre County Courthouse Friday, March 23 in Bellefonte. (Abby Drey/Centre Daily Times/TNS)

The parents of Timothy Piazza, a Penn State sophomore who suffered fatal injuries in February 2017 after a hazing event hosted by Beta Theta Pi, reached a settlement on their claims against the fraternity Tuesday evening.

Effective immediately, the settlement allows Jim and Evelyn Piazza to move forward with claims against other involved parties, including individual perpetrators. The monetary amount of the settlement will not be disclosed.

“The settlement represents a unique, cooperative agreement, and is an outgrowth of the determined dedication by Jim and Evelyn Piazza to the cause of preventing hazing injury and death in greek life in the future,” Tom Kline, the lawyer for the Piazza family, said in a release. “By this settlement, the Piazzas and Beta help to establish a baseline for the new norm of fraternity pledging and fraternity life at universities and colleges in the United States.”

The settlement includes a sweeping conduct reform agreement for Beta Theta Pi. The legally binding reform program, summarized as below in the press release, is divided into 17 points:

Supporting the Timothy J. Piazza Anti-Hazing Law in Pennsylvania
Requiring all chapter houses to be alcohol- and substance-free by August 2020
Including the Piazzas in any decisions about the future of the closed Beta chapter at Penn State (if the property is retained by the chapter’s house corporation)
Withdrawing national recognition if a college withdraws recognitions based on conduct violations adjudicated at the local level
Establishing and communicating that any “action causing injury” to another is grounds for expulsion
Requiring that the college’s police/public safety department be notified of any reported conduct violations that result in serious bodily injury or death of a member, new member or guest
Requiring enhanced education and training on a semesterly basis about social event planning, bystander engagement and prevention of hazing, alcohol/substance abuse, sexual assault and other abuses
Requiring chapters to publicly list online all chapter events and dates within new member education programs as part of Beta’s standardized new member education program and annual certification process
Requiring all chapters to complete annual safe event planning education before holding social events
Encouraging local house corporations to implement a live-in house advisor
Using “reasonable efforts” to implement a standardized new member education program limited to four weeks prior to initiation
Encouraging chapters to install security cameras at all chapter housing
Establishing a relationship statement this fall between the fraternity and all members
Publishing notice on the Beta website about chapter status changes resulting from violations of fraternity policies, including related to alcohol and hazing
Encouraging open access to all chapter housing common areas to third parties authorized by the fraternity or the host institution to visit during social events
Requiring all chapters to have a faculty advisor as part of recognition requirements
Including bystander intervention training in Beta’s risk management education each semester and continuing to provide anonymous reporting options for students and parents

Three former Beta Theta Pi brothers have pleaded guilty to charges in the case surrounding Timothy Piazza’s death. Ryan Burke, 21, was the first defendant to enter a guilty plea to four counts of hazing and five alcohol-related charges June 13. Joseph Ems, 22, was the second, pleading guilty Aug. 8 to one count of hazing and one count of unlawful acts relative to liquor. Bo Han Song, 20, entered an open guilty plea Aug. 30 to two counts of furnishing alcohol to minors. A trial is set for February 2019 for the 24 defendants facing charges.