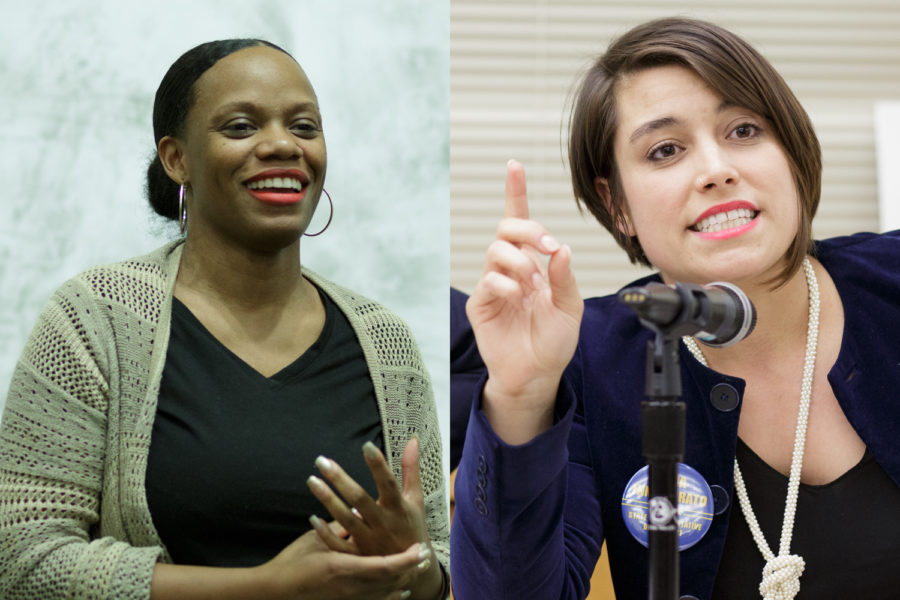 Sara Innamorato and Summer Lee went from under-the-radar activists to Pittsburgh household names nearly overnight when they both won primary elections in May against longtime incumbent Democrats in Pennsylvania’s House of Representatives.

The two, who will run unopposed in the November general election, joined Pitt students in a small room on the 35th floor of the Cathedral of Learning as a part of Thursday afternoon’s Community Cafe. The Community Cafe is a weekly event the Honors College hosts that brings leaders to casual conversations in a public forum about their expertise and skills — and Lee and Innamorato joined to talk about what inspired them to run for public office.

When Lee began to organize her campaign team before her race against Paul Costa in Pennsylvania’s 34th district, she was upfront about not changing who she was for the sake of political image.

Lee decided to run when she realized she never had a politician she wanted to vote for or one she related to.

“As a black woman who grew up in a poor black community, who went to a poor public school, that was predominantly black, I’ve lived certain issues that I’ve never, never heard or seen a politician relate to,” Lee said during the talk. “And that’s important.”

Innamorato, a Pitt ’08 business alumna, says she never thought she was someone to run for office because women in office are not common in Pennsylvania. She often disagreed with Dom Costa, incumbent Democratic house representative from Pennsylvania’s 21st District. She took particular issue with his co-chair position on the state’s Second Amendment Caucus — Costa received a 71 percent approval rating from the NRA in 2018, according to the non-partisan political research organization Vote Smart. He also earned a 40 percent approval rating from Planned Parenthood in 2017.

“As a woman and supporter of Planned Parenthood, and someone who has worked with reproductive justice organizations, I know that access to abortion is access to health care and right now, we’ve seen, before 1973, we saw women actually die because of botched abortions,” Innamorato said. “And the humane thing to do is keep that open and accessible for folks.”

When Lee and Innamorato opened the floor for questions, one student asked how both women will find their place in a predominantly white and male Harrisburg. Innamorato says it will be about finding common ground.

“I’m not planning on compromising,” Innamorato said. “I ran on a platform that is unapologetically about the people in my community and the issues that impact them. I’m not going to compromise on any of that.”

Lee said she has always had to work with people different from her — something which she thinks will be helpful among a House of Representatives that has, in the past, been comprised of a majority of white men.

“I’m a minority, my people make up 12 percent of the country,” Lee said. “I’m always working with people who are different than me so this isn’t new.”

Another attendee asked whether the candidates would accept money from corporations —  a practice often seen as indebting politicians to corporations. Both refused.

“It’s not unheard of and the thing we also know about 2018 is that it’s time to start doing politics a different way,” Lee said. “It costs nothing to knock on a door.”

“We have students that are working on a lot of these issues, you’re talking about clean air and water, and talking about food insecurity,” Primack said. “We want to help in these kinds of areas and bring academics to these important issues.”

Holly Hickling, academic community engagement adviser with the Honors College, thought the event was inspiring for motivated students who came to listen.

“Both of their stories of just being … an ordinary citizen, and then deciding to run for office. I think that can be inspiring for students and just the fact that they just knocked on doors and got people out to vote,” Hickling said. “I think that’s something students can do, they can knock on doors for campaigns even if they’re not running.”

“I like that they both grew up in Pittsburgh and are now just representing those communities because they both … really care about the communities they come from,” Mouat said. “The incumbents they ran against, the Costas, moved houses simply so they can still be in the district that they were representing, which kind of just seems like bullshit to me.”

Sophomore social work major Madison McCartney said she liked how genuine both women were, even saying she felt like she could trust them.

“Trust should be important because it would make it more personal between the two,” McCartney said. “I feel like a personal relationship with your politicians is very important so you know your voice is being heard.”