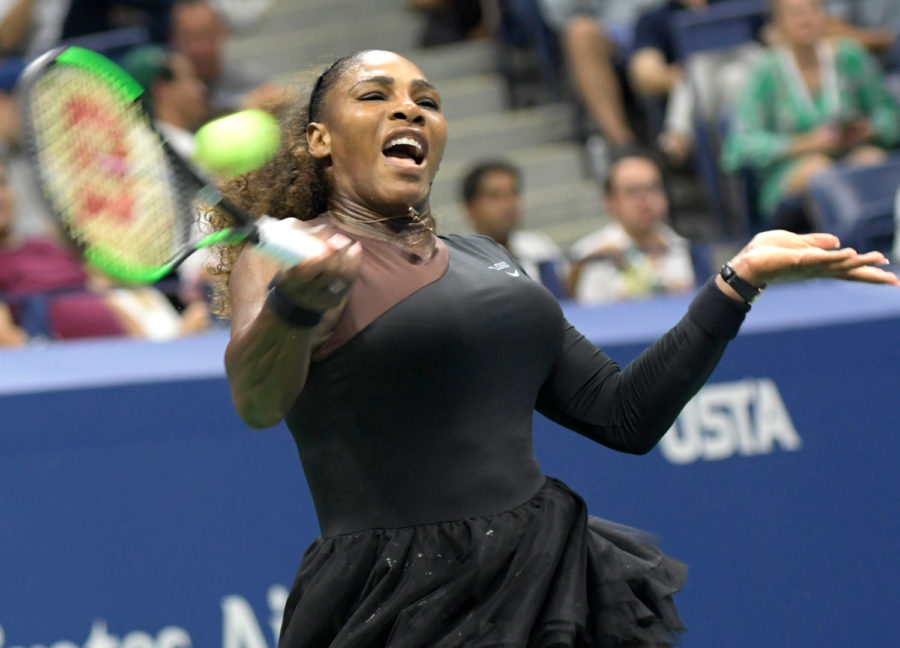 Serena Williams in action against the Czech Republic’s Karolina Pliskova in the quarterfinals of the U.S. Open at the the Billie Jean King National Tennis Center in New York on Tuesday, Sept. 4. Williams advanced, 6-4, 6-3. (Louis Lanzano/Sipa USA/TNS)

Usually, a champion elicits cheers from the crowd after a match well-won. But at the U.S. Open Saturday night, the winner received boos following a controversial competition.

In a final marred by controversy, Serena Williams — who was playing for a record-tying 24th Grand Slam title — fell in straight sets to Naomi Osaka, the first Japanese tennis player to win a Grand Slam singles tournament. This followed two questionable warnings from umpire Carlos Ramos for on-court coaching and verbal abuse, the first cost Williams a point, the second, a game.

But while the crowd’s reaction was unusual, the unfair umpiring certainly wasn’t — tournament officials levy these absurd allegations against female players of color too often to be dismissed as poor judgment. These harsh calls reek of racism and sexism, appearing to be a blatant attempt to stifle African American women’s massive success in a sport dominated by white men.

On-court coaching is illegal in tennis — but according to Rennae Stubbs, tennis commentator and four-time Grand Slam winner, that policy wasn’t enforced once during the tournament even though coaching occurs discreetly in nearly every match.

Williams’ outburst in response to the first warning wasn’t saintlike, but she was understandably outraged by the the insult to her integrity — she’s never received a coaching violation before in her 20-year career. And even still, her arguments with the umpire included no profanity or direct threats that warranted a verbal abuse penalty which would cost her an entire game.

Billie Jean King — an 11-time Grand Slam champion who campaigned in the 1970s for gender equality in tennis prize money — highlighted the obvious double standard that umpires use when judging women.

(2/2) When a woman is emotional, she’s “hysterical” and she’s penalized for it. When a man does the same, he’s “outspoken” & and there are no repercussions. Thank you, @serenawilliams, for calling out this double standard. More voices are needed to do the same.

“When a woman is emotional, she’s ‘hysterical’ and she’s penalized for it,” King said in a tweet. “When a man does the same, he’s ‘outspoken’ and there are no repercussions. Thank you, @serenawilliams, for calling out this double standard.”

King’s assessment resonates when examining other umpiring decisions during the 2018 U.S. Open, and other tournaments throughout history.

In his semifinal match, world No. 1 men’s tennis player Rafael Nadal called the umpire incompetent in a statement that resembled Serena’s outburst, yet he received no warning. Nick Kyrgios, a top-30 player, openly admitted to tanking during his second round match — a clear code violation, but one that earned him a pep-talk from umpire Mohamed Lahyani instead of a warning or point-penalty. By comparison, Alize Cornet was given a warning simply for changing her shirt during her first round match.

This double standard is nothing new, either. In a 1999 match, Venus Williams — Serena Williams’ older sister — was docked a point after a bead fell out of her hair mid-point. The Hawk-Eye system — a machine that makes line calls in place of human line judges — was introduced to the tennis tour after the line judges and the umpire repeatedly, and wrongly, called Serena Williams’ shots out in her 2011 U.S. Open quarterfinal.

To begin to crack down on these biases, tournament officials must require umpires to enforce rules more consistently and fairly. Giving umpires too much leniency in determining violations allows them to levy harsh penalties on players they have a personal vendetta against, and most of those players are successful women, especially women of color.

This won’t eliminate racism entirely, but at least it’ll prevent umpires from having too much influence on matches — something that certainly cheapened Osaka’s victory Saturday, even though she was clearly superior throughout the match, winning 56 percent of the points.

Yet because of the umpire’s actions, a teary-eyed Osaka felt the need to apologize for her well-earned victory.

“I know that everyone was cheering for (Williams),” she said. “I’m sorry it had to end like this.”

The umpire robbed Williams of a chance at a comeback. He robbed the crowd of a good match — and above all, he robbed Osaka of the honest victory she deserved. Discrimination doesn’t just hurt whoever’s on the receiving end, it harms everyone involved — and U.S. Open officials shouldn’t sit idly as it continues.