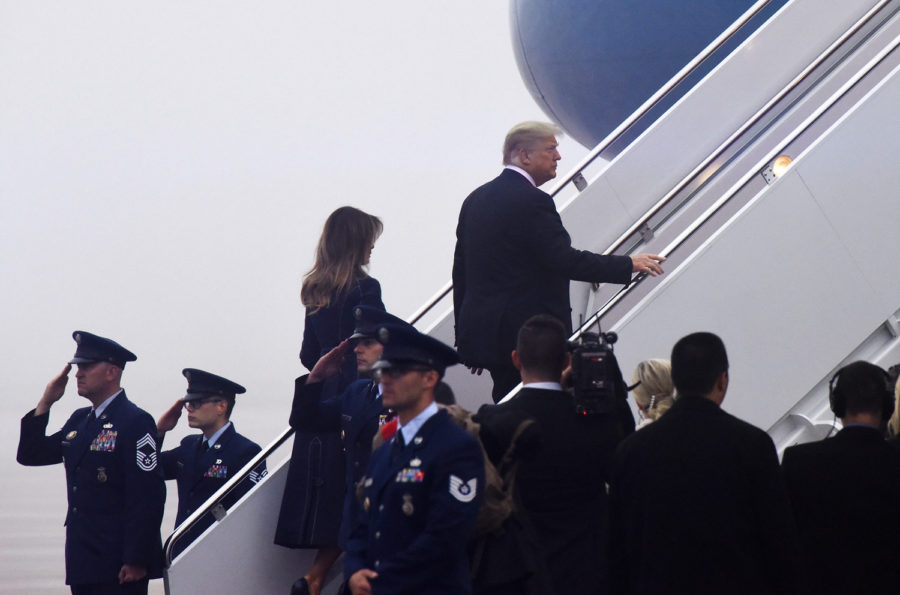 A presidential tweet denying collusion between Russia and President Donald Trump — and suggesting it took place between Russia and the Clinton campaign — came out yesterday just after 4 a.m. before the president landed in Johnstown with energetic fist pumps for the crowds gathered there. This isn’t unusual behavior for the man who’s tweeted on the subject incessantly and often interacts with crowds to get them excited at rallies.

Except yesterday wasn’t a normal day. It was the 17th anniversary of 9/11, which required a certain decorum and level of sobriety that were conspicuously absent in the president’s behavior outside of a prepared speech. Even when he hit the mark, his actions were overshadowed by his behavior throughout the day.

The president spent the anniversary not far from Pittsburgh, at the crash site of one of the hijacked September 2001 planes in Shanksville. En route to Shanksville, he passed through Johnstown, where he pumped his fists at the crowd in a manner more suited to one of his rallies than to a memorial service.

This followed a morning of inappropriate tweets, starting with the denial of collusion and followed by a retweet of his signing of a proclamation to designate “Patriot Day 2018” a day to honor victims of 9/11 — to which he added the hashtags #NeverForget and #September11th. He marred what should have been a positive moment by reducing the memory of those lost 17 years ago to two hashtags.

Following several more tweets about the Justice Department, he tweeted that “Rudy Giuliani did a GREAT job as Mayor of NYC during the period of September 11th. His leadership, bravery and skill must never be forgotten. Rudy is a TRUE WARRIOR!”

The true warriors following 9/11, were the emergency responders who braved the smoke and rubble to try to save lives. The tweet is just a self-serving promotion of the president’s lawyer. Trump should have thanked all the first responders and people who defended and continue to defend the nation. Instead, he inappropriately used the anniversary of a tragedy to promote his own interests.

Then came the worst tweet of all — “17 years since September 11th!”

The nation has had 17 years to process and grieve the events of 9/11, and both the world and American politics have moved forward. But the president’s seeming disdain of or ambivalence for one of our country’s biggest moments of shared tragedy and trauma is disheartening. The tone conveyed by his curt tweet holds none of the respect people expect him to have for the heroes of that day.

Ironically, his son, Donald Trump Jr., thinks the anniversary of 9/11 is a day to leave politics aside. He tweeted as much at Joe Scarborough, who wrote a Washington Post column titled “Trump is harming the dream of America more than any foreign adversary ever could.”

Trump Jr. tweeted that “[i]njecting politics today is disgraceful and only shows how irrelevant and deranged you’ve become.”

The president should have heeded his son’s remarks. Yesterday wasn’t a day for him to make more baseless arguments that the Clinton campaign colluded with Russia — it was a day to lead the country in mourning.