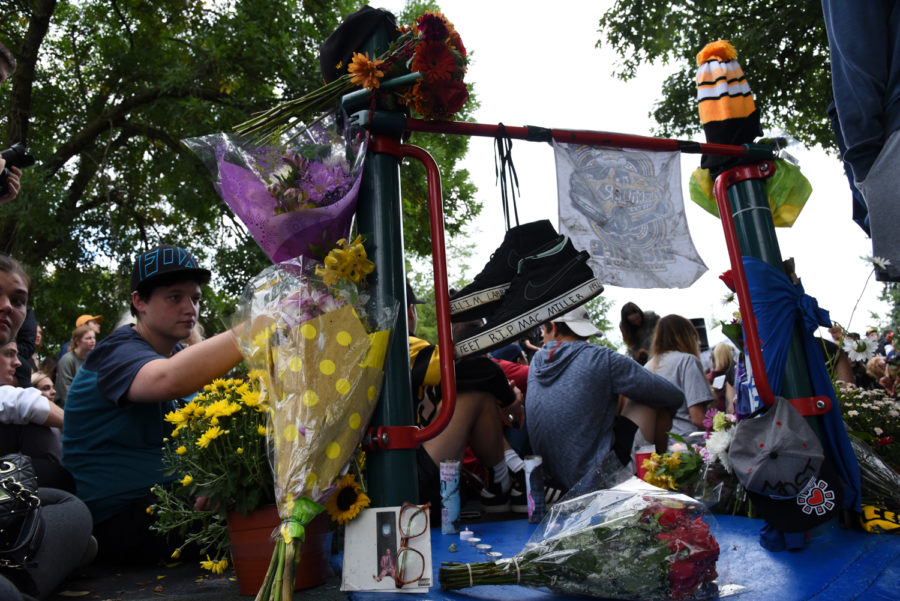 A small memorial to Mac Miller sits upon a slide at Blue Slide Park. (Photo by Knox Coulter | Staff Photographer)

Blue Slide Park in Squirrel Hill’s Frick Park became synonymous with late Pittsburgh rapper Mac Miller after he released both a song and album eponymous with the iconic slide. On Tuesday night it was a place of mourning for Miller.

Hundreds of Pittsburghers — fans, old friends and family alike — flocked to the park Miller made famous for a celebration of his life and career. Miller, 26, died last week of a suspected overdose in his California home, just weeks away from the tour for his newest album, “SWIMMING.” Nightfall Records hosted a candle-light vigil in his memory.

The event featured speeches from some who knew Miller, DJs playing his music, food trucks for fans and dozens of lit candles. Fans began crowding the park around 5 p.m., and by 5:30, the space at the top of the famous blue slide was covered. Fans left letters, flowers, candles, Pittsburgh Pirates hats and Tees by the slide, all in memory of the late recording artist.

The first speaker of the evening was an old friend of Miller’s, Donald Davis. The two attended Taylor Allderdice High School together, and Miller graduated from the Pittsburgh public school in 2010. Davis shared emotional stories about the beginning of Miller’s career.

“When he made his first CD and brought it to school, kids threw them on the floor,” Davis said. “A lot of people used to judge him, they would look at him and say he ain’t nothing.”

Davis continued with his speech by telling a story that he holds close to his heart. He, Miller and some of their friends from Taylor Allderdice High School went to the very park the vigil was held at to film Miller’s very first video.

In the video for the song “Money Money,” Miller and Davis perform their secret handshake. Davis reminisced on this memory with a warm smile.

“We made sure to put that in the video because that was always our thing,” Davis said. “I remember coming to film here that day, it was so damn cold.”

“Mac would have loved this,” she said. “He loved Pittsburgh and he loved everything that you all did for him.”

The fans in the audience applauded both speakers and lit their candles as Mac Miller blared loudly through the park.

Next to the blue slide, an artistic memorial stood honoring Miller. There were photo portraits of him, and a large painting of Miller done by local artist Zachary J. Rutter.

Rutter stood next to his painting proudly, talking to fans who came by to admire the artwork.

“I did this whole painting today,” he said. “I did a painting of Mac years ago, when I was 18. He signed that one and everything. I was really proud of that painting so I decided to do another piece in his memory.”

Fans stopped to take photos with the portrait in between speeches. Some teared up at the display of Miller’s portraits.

One such fan was 19-year-old Jordan Patterson, who has been a die-hard fan of Miller since her middle school years. Soon after she stopped to admire the artwork, the speakers played Miller’s song, “Party on Fifth Ave,” which was one of his biggest hits from his debut album “Blue Slide Park.” Patterson — clad in a T-shirt promoting Miller’s final album “SWIMMING” that was released in August — wiped a tear from her cheek as the audience sang along.

“I’ve been crying on and off today,” she said. “This just doesn’t feel real. None of it does. I can’t believe he’s gone. But I’m still trying to have fun tonight. Mac would want us to party.”

Another fan had similar feelings. Justin Witter — a 20-year-old college student and recording artist from Syracuse, New York — made the trip down to Pittsburgh just for this vigil.

“Mac is one of the biggest reasons why I started making music,” he said. “To be here tonight is crazy, it makes me wish I was from Pittsburgh.”

Though Miller’s earlier music is known in Pittsburgh, Witter was jamming to Miller as early as 2010, long before Miller released “Blue Slide Park.”

“I will never forget the first time I heard Mac,” he said. “A kid in my middle school was playing [the mixtape] K.I.D.S., and I have been with Mac ever since.”

As the sun set at Frick Park, fans swayed to Miller’s music while holding candles. Miller’s song “Best Day Ever” brought out a strong, emotional response from fans.

“Oh man, this one might make me cry,” Witter said.

He and his friends belted along to the lyrics, with the DJs stopping the music for the crowd to sing the hook. The park was completely silent except for the sounds of singing, mourning fans. The words rang into the autumn air, with a somber tone to them.

“It got me cheesin’ from cheek to cheek / And I ain’t going to wait for nothing / Cause that just ain’t my style / Life couldn’t get better / This ‘gon be the best day ever.”