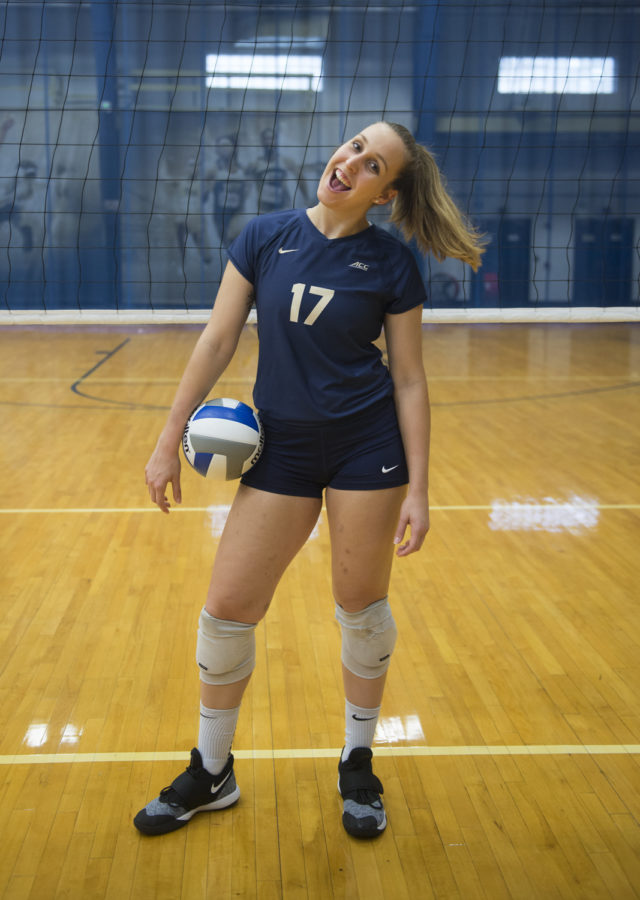 Junior Nika Markovic started playing volleyball at the age of 7 and was named to the All-ACC First Team, AVCA All-East Coast Region First Team and was given an AVCA All-American Honorable Mention in 2017.

Going into the 2016 season, Dan Fisher had an open spot on the Pitt Volleyball roster and Nika Markovic was looking for somewhere to go after decommitting from the University of San Francisco. Fisher knew about Markovic from the European Championships where she was a top point scorer for the Slovenia junior national team. Fisher contacted Markovic and after talking, they both decided to take a gamble, Fisher on the outside hitter from Slovenia and Markovic on moving to a city she had never even heard of.

Markovic, now a junior at Pitt, currently has 758 career kills, including 99 in the Panther’s first nine games this season, and a career hitting percentage of .285. She was named to the ACC All-Freshman Team in 2016, and the All-ACC First Team, AVCA All-East Coast Region First Team and was an AVCA All-American Honorable Mention in 2017.

As a freshman, Markovic helped lead Pitt to its first NCAA Tournament appearance in 12 years and helped them advance to the second round for the first time in 13 years. The next year, she helped lead the Panthers to their first ACC Championship in program history.

All of this almost didn’t happen — at least not at Pitt.

Markovic had intended to commit to the University of San Francisco in 2016, but decommitted after their head coach at the time, Gilad Doron, left to accept the same position at Dartmouth. Fisher contacted her once he heard she was looking for another university to play at. All it took were a couple pictures to convince Markovic to move to a city she had never heard of, 4,488 miles away from her hometown of Braslovce, Slovenia.

“I actually decided on Pittsburgh really late,” Markovic said. “I wasn’t checking it out before. But based on the pictures and videos and everything I checked I just loved it and I knew that was the city I wanted to live in for the next four years. And I think that was a great decision.”

Markovic’s love for volleyball began in her small European hometown. She started playing volleyball when she was 7 years old — her mother played and where Markovic comes from, participating in the sport is “everything.”  As soon as she started playing, she knew she had found her passion.

“I fell in love immediately,” Markovic said. “And I knew I wanted to do that for the rest of my life.”

When she was 16 years old, she was selected to represent Slovenia on its Junior National team.

“It’s always an honor to play for your country, especially because I was in the generation with the national team when we had really good team,” Markovic said. “We made history, we were second in the European championship which was a historical event for our country so it was even better and I am really honored.”

Markovic’s old teammates and members from her hometown still follow her successes. Her mom can’t go anywhere without being stopped and asked about how Markovic is doing.

“I know my whole town is supporting me, which is honestly something I didn’t expect and I’m really proud and grateful for that,” Markovic said. “It’s really nice to see people back home in Sylvania following me, texting me all the time ‘You are doing great’ and ‘We are so proud of you’ and that really means a lot to me.”

As for her teammates in Pittsburgh, they benefit from her energy and commitment to the sport every time they are on the court. According to junior Layne Van Buskirk, Markovic is intense on the court, but also motivating. If a practice isn’t going well, Markovic is the one who always turns it around.

Most importantly, Van Buskirk is happy she plays beside Markovic and not across from her.

“She is very intimidating,” Van Buskirk said. “She does this thing where, like, if she gets a big kill she will stare down the blocker and it scares me. She’s a huge presence and we rely on her a lot.”

Fisher thinks Markovic’s competitiveness plays a major role in helping the team out of ruts.

“Everyone at this level is competitive,” Fisher said. “But certain players just get off of competing and she’s someone as soon as we put up a score on any drill her eyes light up and she wants to win. Those types of players carry you through lulls throughout the year when they come in and want to keep pushing.”

Markovic believes this is the year for Pitt Volleyball. The Panthers are 9-0 so far this season and are currently ranked No. 9 in the AVCA Coaches Poll. But no matter what happens this season, Markovic is just thankful to be a Panther.

“I never imagined that I am going to be part of the generational team that made a historic achievement of course,” Markovic said. “It’s just amazing to see that the program is building and we are getting more fans at every game which is really cool to see … just playing in front of the whole school makes me so grateful and thankful for everything because this is the sport I love.”