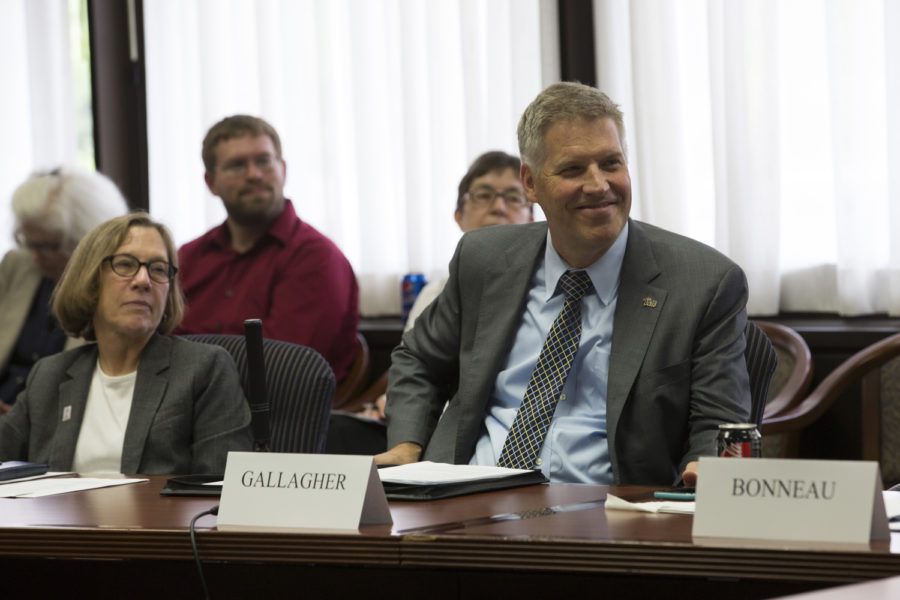 Chancellor Patrick Gallagher spoke about the uncertainty of the upcoming Pennsylvania budget for higher education funding at the first University Senate Council meeting of the 2018-19 school year Wednesday afternoon.

The future is uncertain for Pennsylvania’s state budget — and it could involve students paying significantly more for college.

About 20 people gathered with Chancellor Patrick Gallagher Wednesday in Posvar Hall for the University Senate Council’s first meeting of the 2018-19 school year to discuss topics pertinent to the University community — among them, the highly contested 2019-20 state budget.

The Pennsylvania gubernatorial race is currently underway and there’s little political consensus between Republicans and Democrats on the upcoming fiscal year’s budget. Last year, the budget stalemate in Harrisburg threatened in-state student tuition rates at Pitt as funding for it and other state-related universities was held up for four months past the deadline.

Gallagher said the state government’s prolonged deliberation affects Pitt. The University’s appropriation bill is the last the government passes and requires a supermajority of two-thirds in the General Assembly to pass.

“So if there’s any disagreement, that becomes the leverage,” Gallagher said.

The gubernatorial race and the current division in the General Assembly can influence this process down the road. Pitt received $147 million in state funding last year, which accounts for about 7 percent of its budget. Gallagher said if the state decides to divest from Pitt, then the responsibility to fund that part of the budget will go to students and their families.

According to Gallagher, Pennsylvania’s economy is linked to its students’ success in college — a key reason why the state needs to invest in Pitt.

Gallagher also spoke about Attorney General Josh Shapiro’s visit to Pitt two weeks ago to discuss campus practices regarding alcohol and drug abuse, sexual assault and safe sex. As a result, Gallagher decided Pitt should conduct an internal review in these areas.

“In many cases [Kenyon Bonner] has committees in these specific areas, so I know on the opioid side there is already a group,” Gallagher said. “I don’t know whether he is going to set up a new group to settle this or leverage what they’re already doing and just try to decide whether we’re doing enough.”

The federal government changed the law in terms of federal grants back in April. Now, if a faculty member wants to use a federal grant, they must sign over the intellectual property rights to the University — whereas before, it was up to University policy.

Pitt issued a new policy in response as a quick fix to comply with federal law, but a committee headed by Senior Vice Chancellor for Research Robert Rutenbar will review the policy as a whole to make additional changes. The committee also must consider policy regarding signing those rights back to the faculty member, which Pitt has the power to do.

“One of the things they are going to be doing this year is going over the intellectual property policy of the University,” Bonneau said. “They’re trying to make it more relevant and more efficient, and so on and so on. That is a larger issue that I suspect will be very controversial.”

The other faculty-related issue on the table was the ongoing possibility of faculty unionization. Tyler Bickford, an associate professor in the English Department, Lauren Collister, the director of the office of scholarly communications and publishing for the University Library System, and Carl Redwood, an adjunct faculty member in the School of Social Work, gave a presentation about the benefits of unionization at the last faculty assembly meeting.

Bonneau said it was not appropriate for him to take a position on the union, considering his role on the University Senate Council.

“I view the assembly, in my role, as providing information to people who are interested for information on both sides … and letting Pitt faculty members come to their own conclusions,” Bonneau said.

“My guess is that a fair analysis would show pros and cons. Again, there’s probably things we could be doing better and they might feel they get more leverage through a union than without,” Gallagher said. “But I think sometimes unions don’t always represent everyone equally well … Also, there are union dues and other things that cost the faculty for that representation.”

Student Government Board President Maggie Kennedy also discussed  SGB and The Bully PulPitt’s Civic Engagement Week at her board report. She discussed SGB’s efforts to encourage people to register to vote for the upcoming midterm elections Nov. 6.

“Currently, Congress is dominated by the Republican party and you can view that however you want, but this midterm election could either keep that going or it could turn the tide and change the majority in Congress,” Kennedy said.

So far, SGB has helped 40 people register to vote — and according to Kennedy, the events are all nonpartisan and are more focused on getting students involved with the electoral process.

“We really want them to be looking at Pittsburgh, or if they’re voting absentee, looking at the communities that they call home and figuring out what’s important to them,” Kennedy said. “I think if you don’t engage and vote and try to change, then what’s the point in complaining and pointing out things you don’t like?”