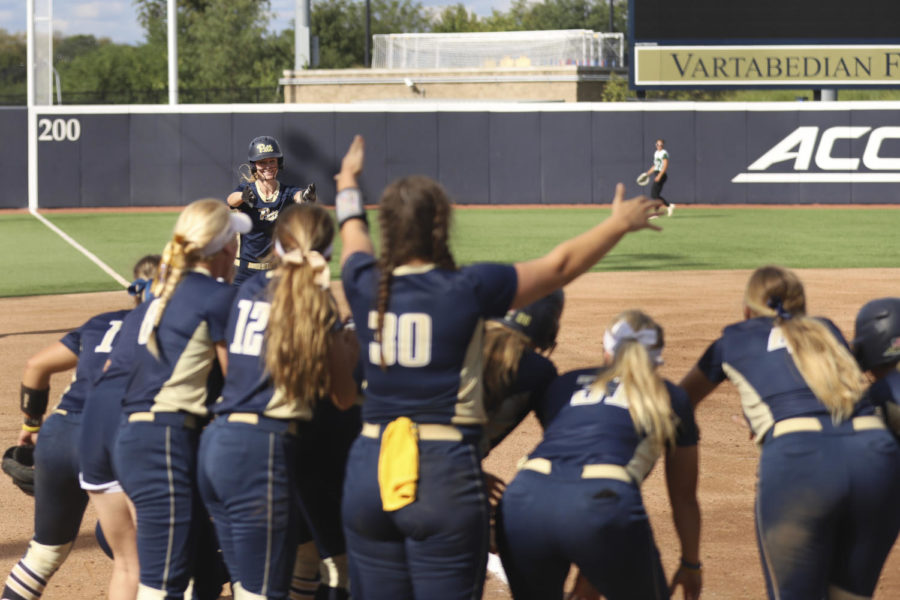 Pitt softball began its season Sunday afternoon with 8-1 and 5-3 victories in a doubleheader against Slippery Rock.

By Griffin Floyd, For the Pitt News

Pitt’s sports teams represented the University well over the weekend, going a combined 4-1. The volleyball team continued its torrid play at the Pitt Invite, reaching 11-0 on the season, while softball had a productive fall ball opener, going 2-0 in a double-header Sunday afternoon. Meanwhile, the women’s soccer team began conference play this weekend but fell to Louisville at home.

The No. 9 Panthers won 3-1 against the College of Charleston on Friday night to improve to 10-0 — the team’s best start since 1983. Pitt took the first set handily by a score of 25-16 after several early ties. The Cougars clawed their way back in the second set, putting up a solid fight before losing 25-19 in a much closer contest. Charleston would eventually break through in the third set, squeaking away with a 25-22 win. The Panthers gave no chance for a comeback, however, putting the game away with a 25-11 finish.

The Panthers closed out the Pitt Invite with another 3-1 victory on Saturday, this time against High Point University. High Point’s Panthers met Pitt’s with tough play in the first two sets, with Pitt winning 25-21 and 25-19. Once again, Pitt struggled to close out the match in the third set, losing 25-18, before escaping with a 25-22 victory in the elimination fourth set. Lund once again led with 14 kills, and junior Stephanie Williams added another 11, along with five digs.

The Panthers begin ACC play this week as they face Virginia at home this Wednesday at 7 p.m. before traveling to Virginia Tech Sept. 21.

The Pitt softball team began its fall session Sunday with a home double-header against Slippery Rock. It didn’t take long for the Panthers to break the first game open, as they put up five runs in the second inning thanks to a three-run home run from junior Kaitlyn Kruger. Pitt added three more points in the fourth and fifth innings, and the bullpen took it the rest of the way as the Panthers won 8-1, with senior pitcher Sarah Dawson tallying the win.

Neither team got much rest in between the action, with the second game starting just two hours after the first began. Junior pitcher Brittany Knight got the start for the Panthers in this one. Pitt took the lead in the bottom of the third when Hannah Bach hit an RBI single. The Panthers added to their lead the next inning when Kruger hit her second home run of the day, this time a two-run shot. In the bottom of the fifth, Knight provided her own run support with another two-run home run to make it 5-0.

Slippery Rock produced a small three-run rally in the sixth and seventh innings, but eventually fell 5-3. The Panthers will play another double-header next Sunday against Wright State and Ohio State in Columbus.

Playing its first game in nine days after the last game against Kansas was cancelled, the women’s soccer team started out rusty in its ACC opener against Louisville, allowing a second-chance goal just six minutes into the game.

The Panthers settled down after that, with goalkeeper Amaia Pena making several quality saves — including one on a breakaway — to finish the half. Offensively, Pitt’s best chance of the half came from a free kick just before halftime, but Louisville sophomore goalie Gabby Kouzelos remained perfect through the first 45 minutes.

The Panthers came out of the break slowly once again, surrendering a goal within the first 10 minutes. Pitt’s defense didn’t allow any goals after that, but received no help from the offense as Louisville managed to preserve the shutout.

That loss brought Pitt’s record to 4-3-1 overall and 0-1 in the ACC, but the Panthers have a difficult schedule ahead — next week, they face No. 6 North Carolina in Chapel Hill on Thursday before closing out the week at No. 17 NC State Sept. 23. Both opponents are formidable and in the ACC, so it will take a big push to improve the conference record in the upcoming week.