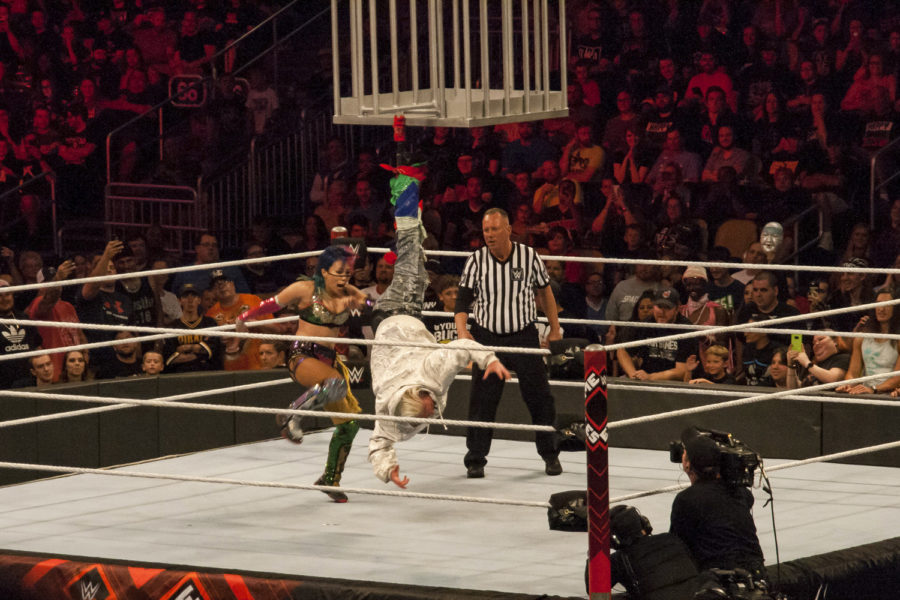 WWE superstar Randy Orton stretched the gauged earhole of opponent Jeff Hardy, poked a Phillips-head screwdriver through it and then twisted the skin around it while Hardy screamed in agony. Of course, it was all legal, as the two men faced each other in a Hell in a Cell match at WWE’s pay-per-view of the same name at the AT&T Center Sunday in San Antonio, Texas.

Since 1997, WWE has held 40 Hell in a Cell matches. Though WWE fans continuously express displeasure at the lower level of action and bloodshed in the company today — due to the switch from a TV-14 to PG television rating in 2008 — the Orton and Hardy iteration of Hell in a Cell may darn well be the best in company history.

The rules of Hell in a Cell are simple — there really aren’t any.

Participants are locked in a steel cage, with this year’s sporting a sweet red sheen, and the only ways to win are by pinfall or submission. Traditionally, there is no way out, and all the action takes place inside the cage. There are no disqualifications, and every weapon imaginable is legal.

The most memorable moment in Hell in a Cell history was at the Mellon Arena in Pittsburgh, when legends Mick Foley and the Undertaker found themselves on top of the Hell in a Cell structure, fighting for glory in 1998. In a surprise move to fans around the world, the Undertaker threw Foley off the cage and into the announcers’ table below — approximately 20 feet — leaving him limp with a bloody mouth, dislocated jaw and a missing tooth.

But Orton and Hardy now sit right atop the list of best Hell in a Cell matches. Ever.

On paper, this match seemed underwhelming. Orton and Hardy have both been in WWE for decades and have faced each other countless times. This was supposed to be a blowoff feud following the duo’s program with Shinsuke Nakamura. Hardy needed some time off due to dealing with several real-life injuries to his arms and back, so working with notable punisher Orton would allow WWE writers to script Hardy off television.

But Hardy, known risk-taker and disobeyer of bodily safety, promised he would live up to his “extreme” reputation in his first Hell in a Cell encounter.

“I can’t wait to see what I can do inside that cage,” he told talkSPORT. “I’ll do something that people won’t forget.”

Though at first, it seemed like all viewers could do was forget the match. Orton dominated Hardy for the first 20 minutes of the bout, outsmarting him at Hardy’s own extreme game. Hardy has taken lots of tables, ladders and chairs to his body — the TLC match was his and brother Matt Hardy’s specialty — but that doesn’t make each hit easier.

Orton pummeled Hardy with a wonderful variety of weapons, ranging from dropping him abdomen-first onto the supports of a steel ladder and then trying to choke him with it, as well as hitting him with more traditional steel chair shots to his already-injured spine. Really, it seemed like a standard Hell in a Cell match.

But everyone’s stomachs started turning when, searching for a new weapon, Orton spilled a toolbox under the ring, revealing an assortment of screwdrivers. With a trademark Orton smirk, he selected a nice fat Phillips-head and slinked back into the ring.

Now, Orton has had repeated heat backstage over the years due to questionable backstage tactics as well as attitude issues, but at this point, I really thought Orton had snapped. I thought to myself, “Oh my God, he is really going to stab Hardy with that screwdriver.”

But what he did was much worse.

Orton placed the screwdriver in his mouth and used his free arms to take Hardy down and pin his arms behind him like chicken wings. Throwing back to his July 17 performance on an episode of SmackdownLIVE, Orton placed his finger in the gauged left ear of Hardy and started to tug, absolutely wrecking Hardy’s ear — gauges are meant to be enlarged slowly and over time.

If that wasn’t already horrifying enough, Orton then removed the screwdriver from his mouth, calmly and methodically placed it through Hardy’s ear hole, stretched the lobe at least a whole inch away from Hardy’s ear and finished by twisted it around twice. Hardy’s earlobe turned white due to the stress of the twisting motion as he screamed but tried not to writhe in pain so as not to agitate it more.

[email protected] is enjoying every second of this #HIAC match. pic.twitter.com/XGgrrih1j2

After several seconds of Orton’s torture, Hardy managed to get back to a vertical basis and break Orton’s hold with a low blow, which was legal due to the no-disqualification rule. Somehow, Hardy gained some momentum and landed some blows, including whipping Orton with a belt — drawing real blood — and performing his legendary Swanton bomb on top of a steel chair on Orton.

After only getting a two count, Hardy channeled into his promise of extreme, setting up a wooden table, a tall ladder and a smaller ladder in sequence. This was a move Hardy has performed numerous times before — place the opponent on the table, then leapfrog from the small ladder over the taller one to land on the table below.

As Hardy got to the top of the ladder, he realized that due to the ceiling of the Hell in a Cell structure, he wouldn’t have room to jump. So, he improvised, grabbing onto the top of the cage like they were monkey bars on his childhood playground and began to swing.

He dropped, and Orton moved out of the way just in time, leaving Hardy to crash and burn abdomen-first onto the table, crushing it instantly. The referee tried to stop the match, but Orton, ever the bad guy, yelled at the ref to “do his job” and count the pinfall. Orton pinned an absolutely crumpled Hardy, and medical staff arrived to take Hardy out of the arena on a stretcher.

The crowd fell silent, which is unusual for bouts including either one of these superstars, and Randy Orton vs. Jeff Hardy quietly rose to the top of “holy shit” moments in, not only Hell in a Cell, but WWE history.

WWE’s next pay-per-view is the Super Show-Down on Oct. 6 in Melbourne, Australia, with a special start time of 5 a.m.